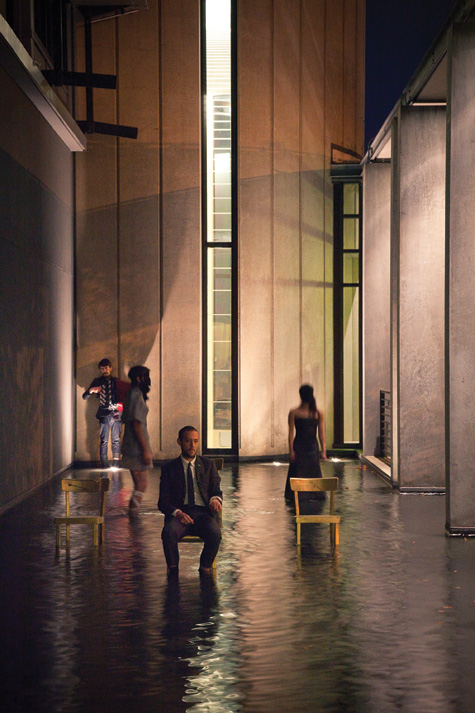 Something happened, and Implied Violence wants to tell your grandmother about it.

Visitors to the Frye Museum are greeted by a beautiful black dress hanging in the rotunda. Adorned with 2,500 bows, it makes an ominous specter, setting a funereal tone. The dress looks large and accommodating, but only by reading the accompanying text do we learn that within this gown is a second sheath that restricts the wearer’s movement to only the tiniest of steps. This theme of constriction is a common element in the work of Implied Violence, the performance art group responsible for the exhibition, Yes and More and Yes and Yes and Why, that contains this dress.

Implied Violence performing The Dorothy K: For Better, For Worse, and Forever. Photograph by Steven Miller.

As the exhibit continues to spill down the long hallway, it offers up more clues to the nature of Implied Violence’s live performances. A video excerpt from the Russian film Andrey Rublyov uses a rolling horse to explore the concept of refusal. A dirty rag sits under glass on a vitrine, the accompanying text explaining that the rag was soaked in ether and used to knock out performers. Even the most traditional items in the exhibition, a collaborative series of photographs with photographer Steven Miller, bloom in their strangeness. Perhaps the most striking object in the show is a paraffin chair that has been shot with hundreds of arrows during a live performance of The Dorothy K: For Better, For Worse, and Forever. This wax sculpture serves as a reminder that the violence isn’t always just implied.

Implied Violence is known for its complex, highly choreographed performances, which test the limits of audience and performers alike. A group of artists who occupy an artistic gray area between dance, theatre and performance art, Implied Violence creates pieces that can span multiple hours or, in some cases, days. Dialogue can be absent, stilted or repetitive; costumes are a hybrid of Victorian-era dress with S&M flourishes, heavy on the corsets and binding. Performances are frequently accompanied by a loud and discordant soundscape. And yet despite all that, there is a magnetic power to the group’s performances.

“When you see an Implied Violence performance, there’s something that’s so compelling, and so exciting.” So says Robin Held, deputy director and a curator at the Frye. Yet trying to talk about an IV piece is like trying to describe a movie by David Lynch; you know things happened, but you don’t know exactly what. Because of this, IV has its detractors who deride the artists as phony pranksters whose work lacks a narrative.

“These items have provenance; what gives them life are the
stories they contain.”

Of course, they say success is the best revenge, and IV has had revenge to spare. On the heels of winning a 2008 Stranger Genius Award for its epic triptych Our Summary in Sequence, IV was invited for a residency at Robert Wilson’s Watermill Center in New York. IV members were ready for a change. “We’ll just go away, we’ll produce these huge things that will do well, and then we’ll come back,” as Mitchell describes the group’s reaction to the invitation at the time. “And it will be much easier for us here. Because that’s what people want here. They want you to have this stamp.” So the group left Seattle and arrived in New York exhausted, frustrated and broke. “Good things are happening to you, but they just don’t feel good,” Mitchell explains. So the members took the opportunity to reexamine the body of work they had amassed since they had come together in 2004 and then began focusing on their next project: their first museum exhibition.

To best illustrate the complexities of the group’s history, the exhibition is multimedia, including video, sound, objects and a live performance. In the hands of a less capable curator, taking IV from the stage to the museum could have been risky. However, as curator Held points out, “My research interest as an art historian has always been performance and its relationship to documentation.”

Perhaps one of the most difficult aspects of staging the show was deciding what to include and what to leave out. Each item received a lot of thought; as Held explains, “If it’s so beautiful you’re not going to think about it or if it’s so ugly you’re not going to care about it, then we’ve lost in a way. We were really looking for those balances where you could see, yes, Implied Violence makes extraordinary objects, but that’s not the point.”

So what is the point? Most of the people who already knew about IV before the exhibit were their peers. So when the group and Held planned the exhibition, they targeted a different audience, one that might not already be familiar with IV’s vocabulary. “We kept coming back to these [objects], asking, ‘Do they represent Implied Violence’s work well?’” says Held, “and ‘What’s the story you want to tell your grandmother?’”

The objects Mitchell and Held have chosen – a tar-soaked ethering machine, a jar of leeches, a seventeen-foot articulated claw – don’t seem to belong inside a museum. They might not be out of place in a medieval torture chamber. But here objects are more than they seem. A papier-mâché bear mask isn’t just a mask, it’s a talisman imbued with potent stories permanently fixed in the layers of honey, fake blood and powder. The distinction is small, but it is at the heart of this exhibit, which poses a simple question: how can an object contain the essence of a performance? These items have provenance; what gives them life are the stories they contain.

“I think Robin has found a way to show the potential of the work and then to create a dialogue,” says Mitchell, “which is extremely important.” •

When he is not writing for City Arts, Joey Veltkamp keeps up with his favorite artists at joeyveltkamp.blogspot.com. His column appears
every other month.