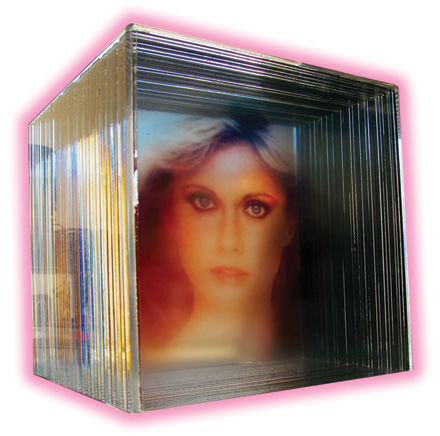 A place where nobody dared to go, the love that we came to know, they call it Xanadu.
— “Xanadu,” by Jeff Lynne

As a young girl growing up in Los Angeles, I probably saw Xanadu twenty or more times in the theatre. The bright neon, the splashy costumes and the catchy tunes by Jeff Lynne of Electric Light Orchestra were all surefire hits, striking straight through the guts of my best friend Dana and me. For us in 1980, Xanadu was a dream, maybe in the same way Avatar was for the kids in 2009. We kept going back, weekend after weekend. We kept going back to Xanadu … because we wanted to believe in magic and in love.

The film, which was intended as a romping roller-disco musical, was a modest success. Starring Olivia Newton-John and Gene Kelly, it would become a cult classic and what I consider a “trans-generational epic.” Combining the jazz of the 1940s and the pre-glitz of the 1970s on the brink of a new, unknown decade, Xanadu served to punctuate the neon fantasy of a generation of misfits. Just in time, too: the year 1980 had a dramatic impact on America. In the course of that year, the U.S. boycotted the Summer Olympics in Moscow, The Empire Strikes Back was released, John Lennon was assassinated, the video game Pac Man debuted and Mount St. Helens erupted, killing fifty-seven people and leaving billions of dollars in damage.

Touching upon themes of inspiration, loneliness and desire, Xanadu is an exercise in discovering hope in Hollywood’s waning utopia.

The title references a poem Samuel Taylor Coleridge wrote in 1797. In “Kubla Khan, or A Vision in a Dream: A Fragment,” the narrator describes a place so isolated and so full of beauty that it couldn’t possibly exist:

In Xanadu did Kubla Khan
A stately pleasure-dome decree:
Where Alph, the sacred river, ran
Through caverns measureless to man
Down to a sunless sea.

When it was published in 1816, Coleridge claimed in a preface to the poem that the piece was incomplete. It was also supposedly inspired by an opium-induced vision. You could say Coleridge was kissed, inspired and moved to pour forth his apparent dream – and that 180 years later, he helped inspire a movie that stretched the hallucinogenic-fused dream as far as it could possibly go.

Xanadu, the movie, opens on Sonny Malone, an artist frustrated by the fact that he’ll never obtain the glory he wants through his commercial work.

“Ah, what the hell, guys like me shouldn’t dream anyway,” he says, tearing up a drawing and throwing the pieces out the window. Magically, the scraps hit a Venice beach mural of the Nine Sisters, daughters of Zeus. In Greek mythology they represent different art forms and inspiration for the creative soul. Suddenly, the ELO song “I’m Alive” begins, and the two-dimensional figures break from the wall and start dancing. Kira (Olivia Newton-John) is the central figure and the last to come to life. The nine muses dance, roller-skate and run through the streets of Los Angeles surrounded by glowing neon auras. Along the way, Kira skates past Sonny and they share a simple kiss. No words are exchanged, just a kiss.

Weaving in and out of the movie on roller skates, Kira is a graceful apparition in billowy dresses with puffed sleeves, and Sonny falls in love with her immediately. He also befriends Danny McGuire (Gene Kelly), an aging jazz musician and businessman, who has encountered an elusive muse himself in his lifetime. Discovering they have dreams in common, the two men decide to open a club in an abandoned art deco theatre, a pleasure dome called Xanadu. 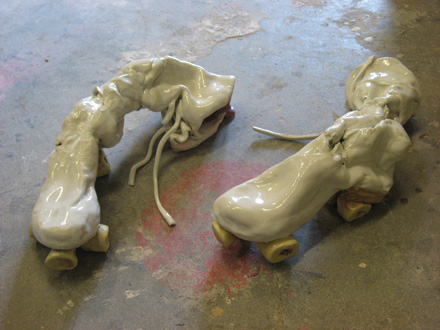 Despite the cheese factor, the film has redeeming qualities. The art deco details and the Busby Berkeley dance sequences are delightful, and there’s even an animated scene in which the characters become cartoon people, then fish, then birds. Kira is a little yellow bird in leg warmers; how cute is that?

All goes well until Sonny learns that Kira cannot stay with him since other mortals need her help too. He wants to give up. But how can he? After being kissed by the muse, don’t we have some responsibility to fulfill the inspiration contract?

In a pivotal moment, because he knows what life looks like when artists fail to fulfill their dreams, Danny encourages Sonny to find her. Skating through the Venice mural wall, Sonny literally breaks through his artist’s block and enters a void, a sort of god-zone. Kira is there, and everything is black except for an array of glowing neon strands that recede into darkness. Sonny demands that Kira come back with him and fights with the gods. Well, it’s more of a healthy debate, filled with wordplay and whimsy and Sonny triumphs.

Finally Kira and Sonny return together to Club Xanadu, a roller-disco that also hosts circus acts and pop-locking dancers. In the final epic dance scene, the costume changes alone make the entire spectacle worthwhile. The closing credits read: “The End, Made in Hollywood, USA.”

The movie was made in Hollywood. And, of course, the spectacular art deco building where Club Xanadu is located in the movie is just a façade transformed by special effects. The film’s director, Robert Greenwald, used only exterior shots of the real-life Pan Pacific Auditorium, which was built in 1935 and hosted the Harlem Globetrotters, Richard Nixon and the Ice Capades. The building closed in the early 1970s and later burned down, just fifty-four years after its historic opening. Three years after the fire, the LA race riots of 1992 (sparked by the acquittals of police officers who beat Rodney King) would come dangerously close to the site on West Beverly Boulevard.

The irony is rich, the neon is blinding, but the muse rolls on. She certainly inspired Dana and me.

To us in our girlhood, Xanadu was brilliance. Unaware of irony, cliché, or the previous accomplishments of these famous actors (although Newton-John’s role in Grease had made an impression), we adored Xanadu. And we reenacted it. We became the characters and danced around to the record. Dana always played Kira, and I was like a second Kira, an understudy, but not blond and kind of dorky. But it didn’t matter; as her best friend, I wanted the best for her, even if I wished I could play Kira too.

This film celebrates realized potential – and dancing. But with the muse comes the challenge and the responsibility to believe in dreams and to actively pursue them.

When Sonny learns Kira won’t be at the opening of Club Xanadu, he tells Danny he can’t be there without her.

Thirty years after the release of the film, Xanadu still resonates with me. Dana and I lost touch back in the ’80s, but that’s just life moving along and relationships shifting. I know today that I can still be Kira if I want. Oftentimes it feels as if a wall is in my way. Like Sonny, I want to break through, rise to the challenge and command the gods as a mere mortal – but a mortal with the courage to stand up and fight for what I want, for what I believe in: going out on a limb, breaking through walls, dancing till I die and loving till I cry.