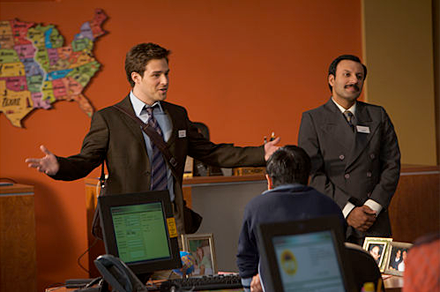 But 2010 is ShadowCatcher’s favorite year, thanks to Outsourced, its 2006 hit by Seattle-spawned director John Jeffcoat, cowriter George Wing (50 First Dates) and producer Tom Gorai (Pearl Jam’s Jeremy video). The story of a Seattle call-center worker who survives the sacking of his entire department by agreeing to train his own replacement in India resonated in our dire times. Propelled by Roger Ebert’s rave, it just got adapted by NBC.

“This is NBC’s only new comedy of the season,” says ShadowCatcher executive producer David Skinner. “There should be seven million viewers for the premiere on September 23, maybe more.” It’s on at 9:30 p.m., right after The Office, knocking Tina Fey’s 30 Rock to 8:30, and pushing Amy Poehler’s Parks and Recreation off the air for now.

Ben Rappaport as Todd and  Rizwan Manji as Rajiv in NBC’s Outsourced pilot.

“This is ShadowCatcher’s first foray into network TV,” says Wing. The toughest thing about adapting our movie to the small screen was making the comedy accessible to a broad U.S. audience. We didn’t try to make it like The Office, but once we got into writing a workplace comedy, we found many parallels arose naturally. You can go halfway around the world for your job, but you’ll still have to work with the same oddball characters you’d find at home.”

To make Outsourced happen, ShadowCatcher had to defy its original patron. “We passed on Miramax’s offer,” says Skinner, “because we didn’t think they’d support the film. They wanted to do a remake.” As Cameron Crowe (who shot a twentieth-anniversary Pearl Jam documentary in Seattle last month) once wrote, “It’s show business … not show friends.” •