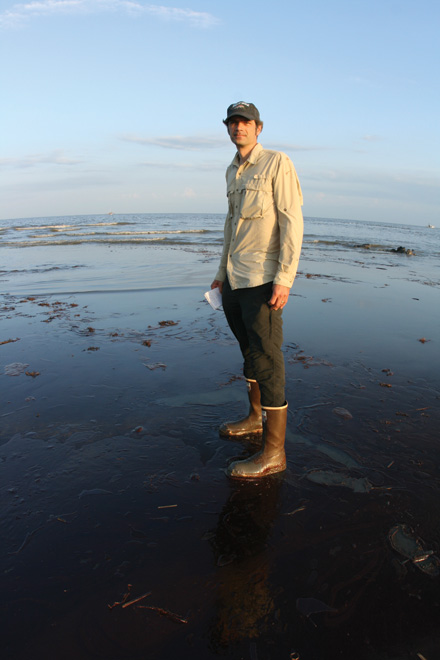 You caught me at a good time. Cleaned (decommed, they call it down here) and coffee’d. What’s it like down here? Amazing and horrifying. The thick gooey sludgy crude has rolled into the bays and marshes, and the stuff we’re seeing is monstrous. New Orleans is too far inland to be impacted directly by the oil, but out in the coastal towns it’s like the government has mobilized for a war that it doesn’t know how to fight.

Wake up at 3:15 a.m., meet the NG photographer at the boat at 4:45, slug down a canned DoubleShot, and head into the marshes looking for oil. Sadly, it’s not that hard to find. Although it seems to be incredibly elusive for the BP and government folks looking to sop it up. So far we’ve had to hazmat two pairs of chest waders. The heavy crude gloms on and won’t let go. Waded in the soup up to my belly earlier today, bought some Dawn at the Home Depot on the way home and dumped half the bottle on myself to get clean. It’s nasty and intense work, and sometimes BP con-tractors threaten to have the Coast Guard arrest us. So far, so good on that one. The thrill in stories for Geographic is usually in the learning. It’s like a graduate-level seminar that never ends. Which might sound like somebody’s version of hell, but I love it. With this story, though, the stakes are raised, mostly by BP’s recalcitrance and bizarrely bullying attitude. There’s a major find-the-truth vibe.

And then I come back to the hotel, shower and go into New Orleans and eat as much local seafood as I can fit in my gut. Because it is going away.

Oysters await. They’ve shut down all but three oyster areas, and everybody’s eating ’em like mad around here.

Check for updates at brucebarcott.com.