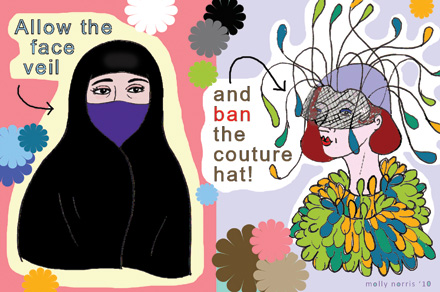 Our cartoonist enrages millions –
and prays we can all get along.

The Girl Who Kicked the Hornet’s Nest is the summer’s best-selling Stieg Larsson thriller, but it could describe City Arts cartoonist Molly Norris. In May, the mild-mannered Seattle artist drew a cartoon lampooning Comedy Central for censoring its South Park episode depicting Muhammad in a bear suit.

“It wasn’t even Muhammad,” notes Norris. “It was Santa Claus masquerading as Muhammad in a bear suit.” But the very idea of depicting Muhammad roused rage, so Comedy Central backed down. “It was nasty, it was so sinister, the way they bleeped out so much of it and put a black box over the bear,” says Norris.

But Comedy Central may have noted three murder attempts on Muhammad-satirizing cartoonists so far this year: two on Sweden’s Lars Vilks and one on Danish Kurt Westergaard, who locked himself in his armored “panic room” bathroom as a screaming assassin pounded it with an ax, the way Jack Nicholson did in The Shining.

Norris’s cartoon was an ad for an imaginary group, Citizens Against Citizens Against Humor, suggesting May 20 as “Everybody Draw Muhammad Day.” “I post all my cartoons on my blog and my Facebook wall,” says Norris. “I send them to art critics and stuff. I had, like, four hundred Facebook friends.” Her audience is mostly local, though she hopes to crack the New Yorker.

Her Facebook post, publicized by bloggers Dan Savage and Andrew Sullivan, ignited a global firestorm. On May 19, the Lahore High Court blocked Facebook from Pakistan’s 169 million people for about two weeks. Some Muslims demanded that India shield Facebook from its 1.18 billion people. Even relatively progressive voices like Ghazal Omid, author of Living in Hell: A True Odyssey of a Woman’s Struggle in Islamic Iran Against Personal and Political Forces, condemned Norris. “I do respect freedom of writing and speech,” Omid e-mailed City Arts. “I was abducted for my actions in Iran. [But] she has crossed the line. Therefore, the action by the Pakistani government is justified.”

“I wasn’t savvy,” mourns Norris. “I didn’t mean for my satirical poster to be taken seriously.” She did want to protest censorship, but she didn’t actually want anybody to draw Muhammad or attack Muslims. “It became kind of an excuse for people to hate or be mean spirited. I’m not mean spirited.” The hate on both sides stunned her.

Norris visited the Muslim Association of Puget Sound’s meeting about the controversy. “I needed to be there to help me heal from the shock of this whole thing. I’m doing a short documentary about what Muslims would like non-Muslims to know, like about what it’s like to wear the hijab [head scarf] in America. It’ll be entertaining and reverent at the same time.” The Express Tribune in Karachi, Pakistan, asked her to do a cartoon reading, “Allow the face veil and ban the couture hat!” “But I have no idea if it ran or not. The communication with them isn’t the best!”

Norris keeps trying to improve the communication. “Artists have to be not afraid when they create,” she observes. “You have to be responsible too with your freedom. It’s such a fine line.” •