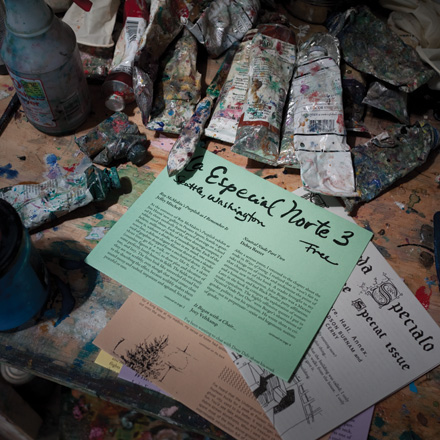 With La Norda Specialo, visual artist
Matthew Offenbacher is turning visual artists into better writers, with the goal of making them better artists.

Artists’ statements are used for everything from grant applications to museum and gallery wall texts. They’re designed to illuminate an artist’s intentions, but many artists dread writing them – “If I wanted to write,” they often point out, “I would have been a writer.” Enter Matthew Offenbacher, painter, curator, and creator and editor of the free, independently published zine La Norda Specialo, aka La Especial Norte. Offenbacher has made it his business to convince artists that they can and should write, and that the results can benefit them all.

Although the zine is available to non-artists at about a dozen bars and galleries in the Northwest, including the Hideout, Greg Kucera, James Harris, Lawrimore Project, the Henry Art Gallery and the Cooley Gallery at Reed College, it was primarily created to motivate artists to read about visual arts being produced locally. The ultimate goal? “To make us all better,” replies Offenbacher, smiling.  “The higher the quality of the conversation, the higher the quality of the work.” He doesn’t intend for the zine to continue indefinitely. “That’s what makes it an art project and not a new magazine in town,” he explains.

Upon arriving in Seattle four years ago, Offenbacher became acquainted with artist Jenny Heishman. Together they began organizing artists’ visits to studios around town, and found inspiration for the zine in the resulting dialogues.  “Collectively we felt like there weren’t enough writers proportional to the work being produced. Artists often complain about the lack of writing about visual art – but if anyone is going to do something about it, it should be us.”

Offenbacher is no stranger to collaboration. As the force behind the Gift Shop Project at the Henry Art Gallery, an almost eight-month-long project involving six collaborative installations and performances, Offenbacher connected more than seventy Seattle artists, whose collective talents transformed the museum’s abandoned gift shop into an alternative exhibition space.

Likewise, La Norda Specialo was conceived as a means of putting artists behind the wheel. The first issue appeared in April 2008. Since then, Offenbacher has produced six issues out of his home and his studio. Published contributions have appeared as poetry, art criticism, interviews and short stories. A special issue edited by visual artist Margot Quan Knight (a recent Art Walk Awards winner) included Victoria Haven’s mock e-mail advertising an artist residency program destined for space that required a nonrefundable processing fee of ten thousand dollars – unless, that is, “the artist can provide documentation of rejection letters outweighing acceptance letters by a ratio of thirty-seven to one for previous art-related applications.” 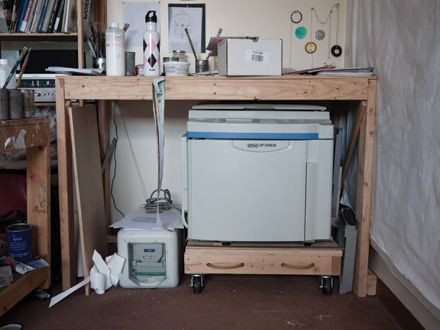 It may look like a laser printer, but a Risograph machine, shown here at Offenbacher’s studio, uses real ink like an offset printer, prints faster, and is less expensive per page.

La Norda Specialo also publishes illustrations – the type of drawing you might see while peering over an artist’s shoulder and into his or her sketchbook. In issue number five, Jenny Heishman suplemented her commentary on Seattle artist Robert Yoder’s August 2009 show, Send Me an Angel, with a loosely drawn sketch of a horse and its big-haired rider inspired by a 1983 video by pop band Real Life. “You learn a lot about something by looking and drawing,” says Offenbacher.

A 4Culture grant allows Offenbacher to pay a small honorarium to contributors. “Artists are often asked to labor for free, so I want people to calibrate their efforts to the work.”

Until recently, Offenbacher would assemble La Norda Specialo at either his home or his studio, then pay to have it photocopied in the University District. In an effort to find a locally owned digital duplicator that he could use to print his zine, Offenbacher called Witt Company, whose management offered to give him a machine earmarked for the scrap yard. It now occupies a corner in Offenbacher’s South End studio. The new acquisition creates a stencil that wraps around the cylinder, much like a mimeograph. “It’s cheaper to run than a photocopier and way faster. It’s more like a printing press than a photocopier.”

Offenbacher conceived of his zine as a print publication rather than a blog because he wanted to incite people to visit galleries and museums to pick up a copy. “In the arts community, the exchange of ideas can be too frictionless and anonymous.

“Society tells artists that what they do is only marginally important, and because of that visual artists often feel very disempowered. But the words surrounding the production of art are extremely important. If artists don’t take ownership, someone else will.” •