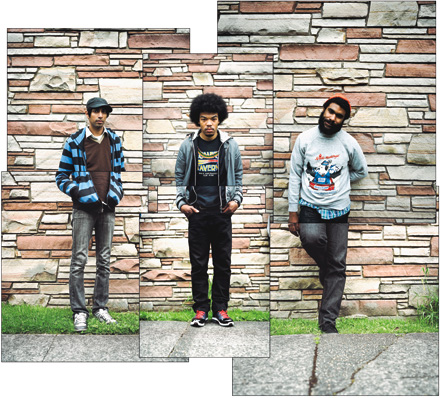 Champagne Champagne moves toward
the mainstream with one foot in
the underground.

How many of y’all know about Champagne Champagne?”

Grayskul emcee Onry Ozzborn is introducing one of Capitol Hill’s most beloved groups to a crowded room at Capitol Hill’s Havana nightclub. The small but packed crowd erupts even before Champagne emcees Pearl Dragon and Thomas Gray rush from the crowd and grab microphones.

The beat drops. It is fast and riddled with syncopation, which seems to catch Dragon off guard. As he begins his verse, he appears to be freestyling. At a moment when many rappers would crumble, the Champagne front man appears to be in his element. He emerges from the hiccup confident, even cocky, as he recites his rhymes.

Gray jumps to center stage after Dragon’s allotted sixteen bars and works his verse, although the sound levels appear to be sliding off balance. In the audience, Champagne’s producer Mark “DJ Gajamagic” Gajadhar begins to wander from speaker to speaker with a quizzical look on his face, eventually heading for the door. After a choppy couple of minutes, the track fades … and the crowd goes wild.

The performance is far from perfect, but in the world of Champagne Champagne, it is still a success.

There is a certain charm to this band that goes beyond the music it makes. The mix of Gajadhar’s sometimes poppy, usually grimy electro-smears and the delightfully vulgar coming-of-age rap from Dragon and Gray is more than capable of turning heads on its own, but what stands out most about the band is the eccentric personalities – both onstage and off – that make up the group.

After releasing its self-titled debut on the Internet in 2008, Champagne earned a reputation by throwing wild parties and late-night get-downs across the city, most notably in a monthly showcase, Phizz, at the now shuttered McLeod Residence art gallery in Belltown.

The group doesn’t play around town every weekend anymore. In fact, Champagne Champagne’s underground fame isn’t so underground anymore. In addition to playing the Sasquatch! Music Festival and Austin’s South by Southwest in the last year, the group landed an acting spot on MTV’s fake-reality indie production $5 Cover: Seattle, directed by Humpday’s Lynn Shelton, which will begin airing as a twelve-episode series on MTV this month.

After their set at Havana, Dragon, Gray and Gajadhar find seats along the low cement wall that runs the length of the lot outside the club. They seem slightly disoriented in the calm outside, and they look a bit like schoolyard pranksters who have been called into the principal’s office for questioning. Between their attempts at answering my questions, Dragon and Gray try to track down a cigarette.

The veteran Gajadhar, who has been kicking around the Seattle music scene for more than a decade as part of internationally successful punk bands like the Blood Brothers and Past Lives, sits smiling as he watches his bandmates joke, and then talks about Champagne’s new studio project. “We have about seventeen tracks that are pretty much completed,” he says.

The three are hoping to release Champagne’s new LP this September. They have also just pressed a physical copy of their first album that’s finally in stores, and they’ve dropped a split seven-inch with sister group Thee Satisfaction featuring the infectious club hit “Magnetic Blackness.” Dragon assures me that they have set aside a copy of the latter for Seattle mayor Mike McGinn, who named Champagne as his favorite local band in a recent issue of City Arts.

I ask how the group feels about being included in Charles Mudede’s “third-wave hip-hop” designation – the carefree party-friendly genre created by the Stranger’s associate editor. “At the end of the day, we’re just brown guys that make good music,” Dragon says.

After Shelton’s mock band documentary goes into wide circulation and the band members follow up their turn as thespians with a record, a lot more people will know about them. But the band, sitting outside this unmarked Capitol Hill club, will tell you that popularity on a large scale is not part of the game plan.

“When Lynn hit us up, it was more like, ‘Would you guys like to be involved in this project we’re doing that has all these Seattle musicians?’” Gajadhar says. “[She didn’t pitch it as] an MTV production. There will be a lot of people that will say we jumped on MTV’s bandwagon and that we totally sold out, but it’s such a weird, indie film.” •