What’s fascinating about longtime Seattle nightlife denizen Tom Hansen’s new memoir, American Junkie, is not the lurid part about being Kurt Cobain’s heroin dealer, or the bit about riding perilously on Layne Staley’s wobbly Harley. It’s not even the part where he describes hiding junk in Screaming Trees singer Mark Lanegan’s place, so that when Lanegan phoned at three a.m. Hansen could say, “Check inside that Stranglers LP on the shelf and pay me later.” 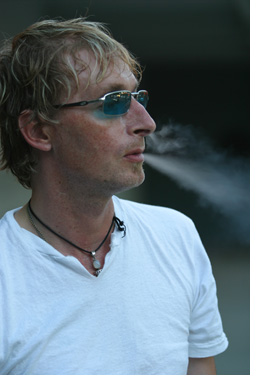 The addictive part of Hansen’s story is his attempt to sleuth out the mystery of his biological origins. “Some adopted people blend in fine with their adoptive family, but it always haunted me. It’s like not having a foundation for your house – the first storm blows the whole thing away.” Hansen says Seattle’s punk scene blew his frail ego away. After making headlines with shock-rock bands the Fartz and the Refuzors, he sank into dealing. He earned a thousand dollars a day. “I was reliable, the effect of my upbringing by my straitlaced, hardworking
adoptive family.”

When he kicked his sixteen-year drug habit in 1999, Hansen bonded with his birth mother, who confessed that his father was alcoholic Seattle painter Jack Stangle. “When she saw my paintings, she flipped out. ‘Oh my God! You paint just like Jack.’”

Stangle, the youngest-ever Seattle Art Museum annual prizewinner, debauched himself to death at fifty-two after his SAM retrospective and a New York show mounted by Ethel Kennedy. That was in 1980, as Hansen’s own talent propelled him to a tantalizing record contract, failure and addiction. “Like father, like son,” says Hansen.