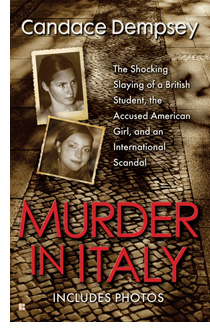 Candace Dempsey didn’t intend her Seattlepi.com blog Italian Woman at the Table to become a true-crime column, but thanks to the trial of UW student Amanda Knox, that’s just what it became. Now she has a new book, Murder in Italy: The Shocking Slaying of a British Student, the Accused American Girl, and an International Scandal. City Arts asked Dempsey what makes her tome so special.

What makes you an expert on the Amanda Knox case? I’m the only Italian American to write a book about it, the only book writer who covered it from Seattle and Perugia. I have direct access to the key players in Italy and Seattle (prosecution and defense) and documents I don’t see anywhere else. I’ve even interviewed the controversial prosecutor Giuliano Mignini. I understand Italians, the court system, modern forensics, how the Internet shapes the news.

You and Seattle’s Pulitzer Prize-winning New York Times blogger Timothy Egan vote against conviction; filmmaker and Stranger writer Charles Mudede, who tried to sell a screenplay about the case, tells City Arts, “Amanda is guilty.” Why do you think she’s innocent? I didn’t vote against the conviction; we questioned it. That’s what reporters do! I’ve never said Amanda Knox is innocent. That’s for a jury to decide. I wrote a blog called “What if she’s innocent?” at a time (January 2008) when people were openly calling for a lynching. Nobody was questioning the evidence. So I suggested alternate theories, checked the facts and argued that Knox deserved her day in court.

Why do so many Italians believe the wild Satan-sex-and-drugs fantasias of the prosecutor? The Italian jurors who condemned Amanda didn’t buy those fantasies. They described Amanda Knox and Raffaele Sollecito as hardworking students led astray by Rudy Guede. There are Italian reporters who’ve been very critical of the prosecution, but they have to be careful. Look how many journalists have been charged with defamation in the Knox case. Even Amanda’s own attorney and the West Seattle Herald have been charged. The Italian reporters have to be extra-careful lest they be thrown in jail like investigative reporter Mario Spezi as described in [his book] The Monster of Florence.

Is it all over for Amanda? Her case is still ongoing, with an appeal scheduled for fall 2010, so it’s not over yet. •