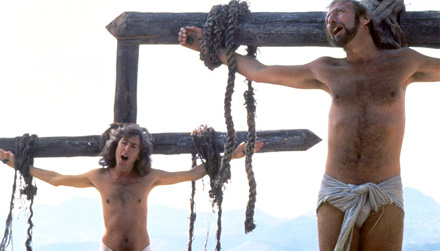 Seattle’s celebrity pastor, Mark Driscoll, recently attacked ChristianityToday.com‘s positive review of Avatar from the pulpit of his Mars Hill church. He called the 3-D megahit “the most demonic, Satanic film I’ve ever seen.” City Arts spoke with former CT movie critic and Seattleite Jeffrey Overstreet, who reviewed Driscoll’s review. “Avatar sounds like it was written by a sixth grader,” Overstreet says. “It’s like a Happy Meal. But if you’re going to call a Happy Meal ‘demonic,’ then I’m going to defend it.” Overstreet says believers should know movies, just as St. Paul knew and quoted pagan poetry in Athens. “And what’s the place where Paul did this?” Overstreet asks. “Mars Hill!” City Arts asked Overstreet to defend other films Christians love to hate.

1. Monty Python’s Life of Brian (above)
The Charge: It mocks Jesus.
The Defense: Not true. It makes us laugh as we watch gullible, fickle, arrogant humans chase a false messiah, exploit religious teaching for their own gain and misunderstand Jesus.

2. Harry Potter
The Charge: It’s witchcraft.
The Defense: No, it’s make-believe guiding kids to consider their own gifts. Rowling, a Christian, wove scripture into the stories.

3. Brokeback Mountain
The Charge: It promotes homosexuality.
The Defense: The film shows the evils of homophobic hatred, and also demonstrates that obsession can blind us and true love sometimes requires self-denial for the greater good.

4. Natural Born Killers
The Charge: It’s obscene, violent, blasphemous.
The Defense: It’s a brilliant lampoon. It exposes our national obsession with criminals, crime and scandal. Anybody who commits “copycat” violence missed the point.

5. Saved!
The Charge: It satirizes Christians.
The Defense: I attended a Christian high school. Christian teens (and their teachers) are prone to the same pride, peer-pressure games, hypocrisy and cruelty as any teens – and this wouldn’t surprise Jesus, whose disciples behaved the same way. Admittedly, the film’s conclusion – that Jesus wanted nothing more than kindness and tolerance – is severely insufficient.