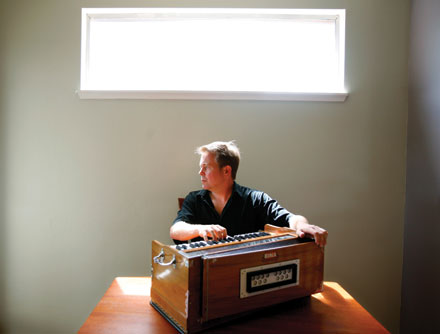 Something unprecedented happened between the February performance of Garrett Fisher’s opera At the Hawk’s Well in Seattle and its March performance at New York’s famous Judson Memorial Church: a rave review/profile by Wall Street Journal West Coast performing arts critic Brett Campbell. “Loved it,” Campbell e-mailed City Arts. He’s never covered Seattle before in his ten years with the newspaper. “Among American composers of his generation, Garrett stands out because of the way he’s assimilated such diverse global musical and other artistic influences into a distinctive, original, yet listener-friendly sound. And he’s successfully created a strong collaborative process for making multimedia productions that may be a sustainable model for independent twenty-first-century American composers.”

Fisher credits, for his success, his sister and choreographer, Christy Fisher, and his New York-based dramaturg Ken Cerniglia, who works with people like Jules Feiffer developing Disney theatricals in New York. “If you look at the credits for The Lion King, you’ll see him listed as key dramaturg. For Julie Taymor – and me.” But he calls the WSJ coverage “unnerving. More exposure brings more risk – not merely in the possibility of rejection but of informed rejection.” •