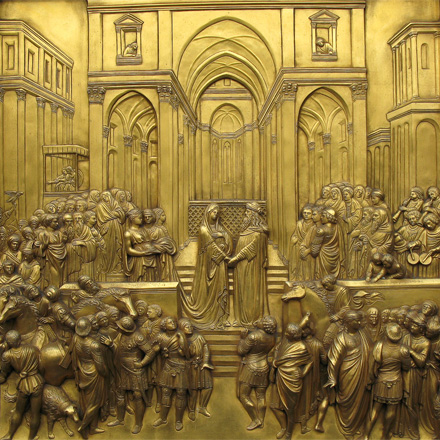 In January 2008, Lorenzo Ghiberti’s Gates of Paradise arrived in Seattle with much fanfare, like an extravagant gift of the month of doors. Three of the exquisitely chased basso-rilièvo panels from this famous Florentine portal were touring the U.S. after a painstaking restoration process almost as lengthy and meticulous as their original fabrication. They had already been to Atlanta, Chicago and New York. The Seattle Art Museum was the last place these panels — Adam and Eve, Jacob and Esau and David  — would be seen outside of Florence.

A high-profile part of SAM’s inaugural year in its newly expanded downtown space, the exhibition was a popular success. Seattle audiences stood in long lines for the chance to scrutinize them at eye level, front and back, a Janus-wise perspective no Florentine citizen standing in the Piazza del Duomo in 1452 could ever have envisioned. Installed that year on the east side of the Baptistry, just three years before Ghiberti’s death (having taken him twenty-seven years to produce), they dazzled viewers for centuries and proved a turning point in Italian art. One can see in them, for instance, the inspiration for Michelangelo’s wizardly God raising Eve from the side of a sleeping Adam on the Sistine Chapel ceiling.

Lorenzo Ghiberti, Solomon and the Queen of Sheba (Panel 10 of the Gates of Paradise); photograph by Justin Norris.

Eventually, however, their gilded surfacing fell out of favor, and they were deliberately blackened to suit the chastened more subdued taste of the eighteenth century. Neglect, weather and industrial pollution all took their gradual toll, the slow hand of corrosion memorably compounded by a damaging flood in 1966 that engulfed the lower panels in 1966. The first time I saw them, in situ, in January 1988, just before they were removed to begin the current restoration, the bustling composite narrative scenes on each of the ten panels seemed sadly mute, their shine an ancient rumor, their supple dynamism blunted. It was hard to make out any but the most obvious bodily details, even on those panels closest to the ground. Five hundred years in the open air had left the threshold of paradise in a sorry state.

Now, twenty years later, here they sat, ensconced and floating in the ambient darkness of SAM’s special exhibition room, their gilded forms suspended like time itself — multi-planar, fluid, deep. Seeing them restored was like witnessing the first gleam of the Renaissance all over again — the emergence, literally, of perspective as a compositional axiom, of naturalism in the fine shades of feeling etched into each attentive figure. I stood before them, huddled with my fellow museum-goers, not unlike those hosts of angels encircling Eve or the soldiers pressed between ranks and craning for a view of David, amazed that these doors had traveled all the way to Seattle to reveal once more their sublime minutiae — the watchful owl in the Tree of Life, the lizards scurrying among the flowers beneath a God so poised and busy — stretching liminal space in their wake. 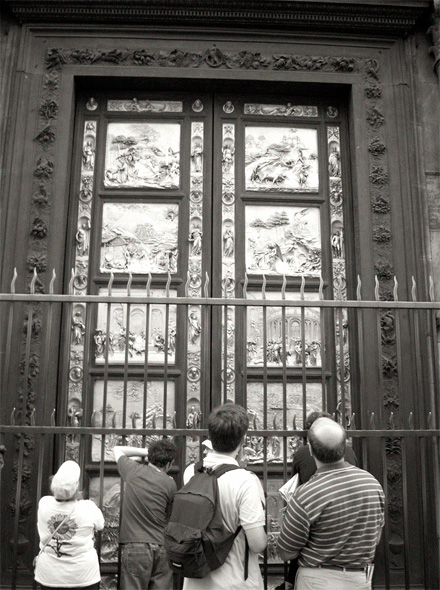 Tourists visiting the Gates of Paradise at the Battistero di San Giovanni in Florence, Italy; photo by Diana Blackwell.

A month after Ghiberti’s Seattle debut, a collection of Roman art from the Louvre came to SAM for an extended stay. Flush with the simultaneous advent of Renaissance Florence and imperial Rome, Seattle seemed, all of a sudden, like a precinct of eternity, brimming with ancient urbanitas. Curated by Margaret Laird, Assistant Professor of Roman Art at the University of Washington, the Roman exhibit was organized thematically to emphasize the detail and endeavor of everyday life. There were the customary monumental sculptures of emperors and gods, and friezes depicting sacrificial processions, but also a number of more humble artifacts — a soldier’s bronze certificate of conscription and votive figurine of Mars, a portrait of an Alexandrian woman as expressive in its realism as early Manet, a collection of women’s busts sporting the fashionable hairdos of the day — enough to bring the color and texture of Roman citizenship and superstition to life.

Indeed, the lares wouldn’t seem out of place in the Emerald City, which has more than a passing affinity with Italy and its ancient capital. We have our hills, of course — a Capitoline among them. We have our volcanoes and earthquakes and fish sauce. The Convention Center now sports a triumphal arch over Pine Street, the public market a lucky (if not sacrificial) sow. We even have the roads: Florence, Ravenna, Etruria, Piedmont, Lago. There Then there are the streets: is a Homer and a Seneca, a Republican and a Pontius, a Cleopatra and a Helen. We meander along Arboretum, Viburnum, Olive, Sylvan, Flora and Florentia. We set out for Albion, Ithaca, Ida, Lyon. We meet Augusta and Ursula, Angelo and Angeline, even Othello and Iago. We gaze upon Bella Vista and Montavista. We adore Aurora, Mars, Neptune and his Triton. We stand on Palatine, loftiest of them all. There are more Latinate names for Seattle streets than for any other constituency except perhaps pioneer citizens — an odd choice of nomenclature for the continental U.S. city farthest from that source. Unlike naming the state capital Olympia, or putting the statue of a westward-gazing George Washington in Red Square like some pious conquistador on a peak in Darien, the music of these street names inhabits the substrate of Seattle’s civic identity. They have a quiet, reflective genius to them, like a comic grin, the memory of a nostalgia we never knew we felt.

The classical allusiveness of our city doesn’t end with avenues and boulevards. A walk around any neighborhood turns up surprising resemblances, none more evident than the dome of Holy Names Cathedral on Capitol Hill, which floats above the treetops like an apparition of the baroque, or the red-brick Romanesque campanile of St. John’s on Phinney Ridge standing as warmly visible from afar as the high point of any Tuscan hill town.

On First Hill, at Pike and Boren, you even run across a neoclassical ruin in Four Columns Park. These free-standing pillars once graced the entrance to nearby Plymouth Congregational Church, demolished in 1966 (the year of the great Florentine flood) to make way for I-5. As with so many vanished temples in Rome, or Greece, the ghost of the building still hovers about the columns like a sudden rise in barometric pressure. When I see them, I think especially of the three-column fragment of the Temple of Castor and Pollux which has stood for centuries like a landmark amid the rubble of the Forum. Four Columns Park was recently renovated and now includes three large granite urns which formerly sat atop columns of the old Music Hall Theatre at 7th and Olive. Opened as the Fox Theatre just before the stock market crash of 1929, that ill-starred Spanish baroque-style building never quite found its place in the cultural life of the city. Yet if, as Keats writes, “Heard melodies are sweet, but those unheard / Are sweeter,” then these relics of the concert hall era play on, piping their spirit ditties as, below them, the freeway traffic races by.

When you come to Fremont Peak Park on Phinney Ridge, you are met by a human-sized spool of aluminum “thread” which unwinds from its cylinder and loops through the wooded grounds of the half-acre hilltop preserve. On it, an inscription invites you to step back in time:

The entrance to the labyrinth faces east to catch the first sunlight of the day. There Ariadne awaits, holding a spool of silver thread. After his journey through the labyrinth to face the Minotaur, Theseus, holding the end of the thread, retraces his path back to her. In the early light of both sun & and moon, Theseus & Ariadne embrace.

After crossing an entrance plaza imprinted with all twenty-eight phases of the moon (including a blank spot for the new moon), you can indeed follow this thread through the semblance of an outdoor labyrinth to reach, at the park’s western end, the waiting bull. This takes the form of the Hyades star cluster in the constellation Taurus, which appears as a pattern of pipe-sized peepholes embedded in an equinoctal axis wall. The thread itself splits in two to mark the sightlines of winter and summer solstice.

Designed by environmental artists Laura Haddad and Tom Drugan, this mythically suggestive landscape is one the Romans would have recognized and appreciated. They erected temples and decorated villas specifically to commemorate their links to Greece and its gods and heroes, the Pantheon being the most cosmologically significant of these buildings. Another famous site is Palestrina, which was built on a steep hillside to resemble the Lydian city of Pergamon, with its great library of parchment scrolls that Marc Antony plundered as a gift for Cleopatra. The emperor Hadrian, for his part, designed his imperial villa at Tivoli to memorialize his journeys in Egypt and Greece, with a canopus to represent the Nile and a round tholos-style temple to echo the Oracle at Delphi — his version of a souvenir, writ large. This practice was revived in the Renaissance. In the Villa Farnesina in Trastevere, for instance, wealthy banker and art patron Agostino Chigi had his horoscope — the exact alignment of planets on the day he was born — painted (by Peruzzi, among others) into the vault of the loggia in the form of astro-mythological scenes. These sites, and many others like them, were all intended to flaunt Rome’s central position in the scheme of things. And though Rome may have been caput mundi, the head of the world, here in Seattle, the Peak Park reminds us that Fremont remains the Center of the Universe.

Back at SAM, you can physically step into Italy all year round, no passport required. The museum contains a room imported and reassembled piece by piece from the northern Italian town of Chiavenna, a prosperous outpost situated on a trade route through the Alps. The room is a stua, a parlor or family room with hearth, from the sixteenth-century Ca’ Lumaga, the house of the patrician Lumaga family. With wooden paneling and an intricately carved ceiling depicting an urn wreathed with pomegranates and other fruit, the room is both spare and redolent with the passage of time. The comings and goings of the Lumaga family have been supplanted by still-life arrangements of glazed pottery pieces, many from Maiolica and Faenza. An east-facing window catches the (artificial) light of eternal day.

Not far away, past the tabula rasa gaze of a Cycladic figurine, beyond black Attic vases and a bust of a particularly thoughtful-looking emperor Claudius undeterred in his thinking by a broken nose, you stumble on one of classical Seattle’s coolest surprises, a collection of glassware salvaged from the only known grave of an ancient glassblower. The tomb belonged to Julius Alexander, who lived near Lyon in the third century CE. Born in Africa, Alexander lived most of his life in Gaul but was nevertheless a Roman citizen. In other words, Roman citizenship was not just a fact of location but a practical ideal.

His tomb contained six bottles, four bowls, two cups and a glass hairpin, all flawless in form and transparency. The glass has a distinct blue-green tint, as if, pulled from the hair, released from the hand, it’s still refracting the temperate weather of an ancient Gallic spring. As Rod Jellema writes in “Catching Light,” the color seems to let light rest, the light of the past still gleaming, its subsistence matched only by its fragility. As an optical event, the bowls and bottles of Julius Alexander are pure continuity. Skilled in the art of the mundane miracle, he reaches across to the centuries to claim a place as a citizen of our time, too. •