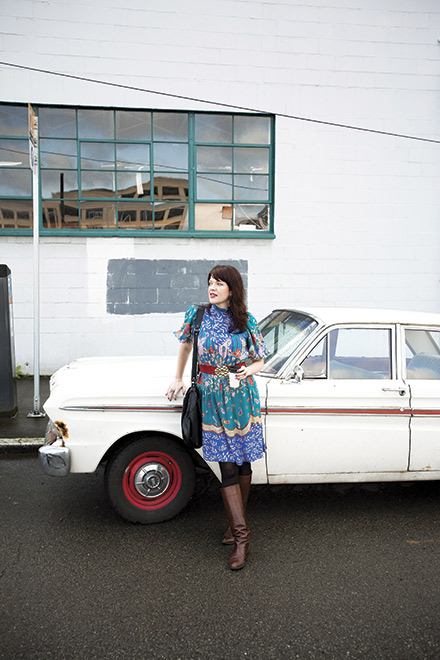 Seattle-based Shelby Earl once led a high-powered music career, working for EMP, Wind-Up Records and Amazon. But she took the plunge most artists just talk about when she turned down a position at a major New York label to record her own album while waitressing on the side. She plans to release that, her first solo record, later this year, featuring collaborations with members of Shim, Fleet Foxes and the Maldives. And while she’s juggling life in the studio and onstage (she appears this month at SXSW), we got her reflecting on how her style can sometimes be an extension of her sound.

How would you sum up your style? I have a Picasso quote written in my songwriting notebook: “If I don’t have red, I use blue.” I feel like it perfectly sums up both my songwriting and my fashion tendencies.

Who inspires you? Other musicians. I love that alt-country artist Gillian Welch takes to the stage in a simple country dress with cowboy boots and her hair down. Meanwhile, one of my all-time heroes, Björk, never walks on a stage without feathers, sequins, face paint or some kind of costume. I tend to incorporate a little of each approach: a vintage dress with boots or heels and a little flair in my jewelry or headwear. And of course, there will always be the red lips.

What item do you own, but never wear? I own one suit, but I haven’t had a single reason to wear it for over ten years. Thanks be to the music industry for having jobs that don’t require that kind of gear.

What clothing item do you most cherish? My new ugly sweater. As soon as I knew I was going to quit my job and go into the recording studio to make a record, I set out to find the perfect cozy, vintage sweater to act as my everyday uniform. I finally found the ultimate cabin-chic sweater on eBay. It’s rarely left my body since. •