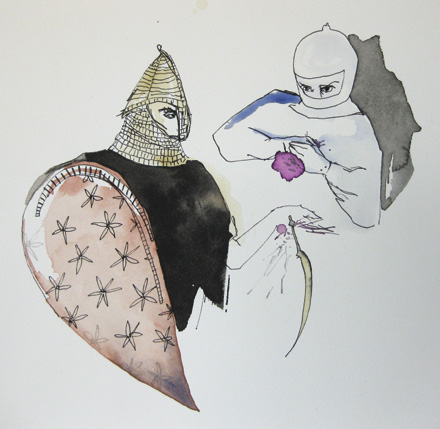 Sketch for Combattimento by Claire Cowie

Heiner Goebbels, Prince fan and founder of the experimental rock group “Cassiber,” is one of the most important — though difficult to describe — modern day composers.  Born in 1952, he studied music and sociology in Frankfurt, Germany. Early in his career, Goebbels divided his work between producing music, writing music for stage and television, and developing theatre scenes. But it was a series of audio plays in the 1980s that earned the self-described “director” (he shuns the composer label) notoriety, launching his reputation as an adventurous musical voice.

The Seattle Chamber Players and Pacific Musicworks are bringing Goebbels to Seattle in early March for the local premiere of “Songs of Wars I Have Seen” at On the Boards, one of many new and experimental music debuts presented by the group. The work’s requirements — including a compliment of early and authentic instruments played exclusively by women – will make it one of the most challenging pieces the Chamber Players will present to local audiences this season.

Named after Gertrude Stein’s memoir of the same title and described as “staged concert with words,” “Songs” was composed for the joint forces of the London Sinfonietta and the Chamber Orchestra of Europe. The piece premiered in 2007, and in 2009 “Songs” received its North American premiere during the International Chamber Orchestra Festival.

The Seattle Chamber Players’ interest in presenting Goebbels’ music started in 2005, when the group visited the Warsaw Autumn Festival. David Sabee, a member of the Chamber Players, attended the second performance of another piece by Goebbels — “Landscape With Distant Relatives.”

“It was overwhelming in scope, intricacy, and impression, with a multitude of themes,” Sabee says. “Hard to describe, it came closest to being classed as an opera. Needless to say, the impression of this two and a half hour work was very strong. Immediately, I began dreaming of somehow bringing the work of this amazing and distinct voice to Seattle.”

Driven to fill the creative space between opera and musical theater, Goebbels readily combines influences from multiple musical sources, challenging audience preconceptions. The one-time rocker readily admits to plundering material from other sources and is actively interested in a variety of vocal styles, ranging from ethnic song to spoken word.

Spoken word and untrained voices figure prominently in “Songs,” sometimes to make dramatic points. Instead of using a dramatic narrator, Goebbels requires the female baroque string players to recite different sections of the text, at times incorporating Gertrude Stein’s own words into the piece. Goebbels adds an additional element to the work, punctuating the narration with supporting, background counterpoint from the baroque instruments.

“The element that comes to the fore is that of comparison, of remixing, of a grand and meaningful collage of our shared musical, artistic and literary history, curated and finessed in such a way as to propel a strong singular viewpoint,” Sabee says.

There is one inescapable fact about Goebbels’ music that defies the various ways to describe his music – with each new piece, Goebbels is expanding on a form of music and theater that is his own. Goebbels’ music doesn’t sound like the opera or musical that audiences are accustomed to, but pieces like “Songs” wouldn’t have been possible without the efforts of operatic composers like Puccini, Verdi, Wagner or even Claudio Monteverdi, whose “Combattimento” is being performed alongside “Songs.”

Wagner and Verdi transformed opera into music drama, turning music, acting, and staging into a seamless form. Goebbels is composing and creating with this history as a guide, making pieces that are increasingly connected to the world of art, popular culture and literature. When “Songs” is performed in Seattle, it very likely will transcend On the Boards’ stage, surpass the musical forms we have become familiar with, and let the audience glimpse the future of music, theatre and opera.

Pacific Musicworks and Seattle Chamber Players present “Songs of Wars I Have Seen” March 4-6 at the Merrill Wright Mainstage Theater at On the Boards. For more information, go here.