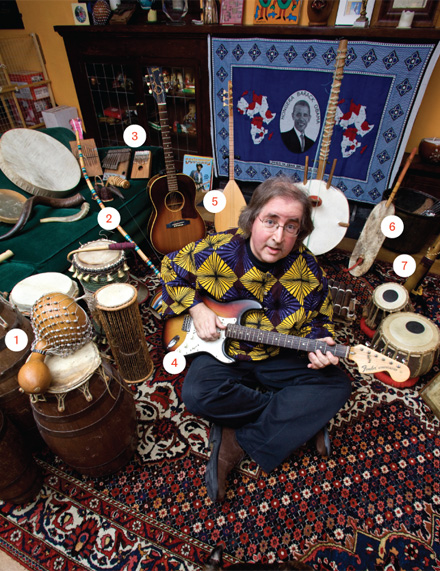 Jon Kertzer has run, like a thread, through almost every one of Seattle’s popular music institutions. He was present at the inception of the Bumbershoot Music and Arts Festival, where he booked national acts. He served as the music director of Seattle’s first FM rock station, KOL. He worked for some time as the director of multimedia and special projects at the Experience Music Project. In 1984, while studying ethnomusicology in a graduate program at the University of Washington, he began a long run with KCMU (now KEXP) as the host of Best Ambiance, a three-hour block devoted to the latest African music that he still hosts on Monday nights. So when it was announced late last year that Kertzer would be working with Sub Pop to develop a new record label devoted to the music of Africa and called Next Ambiance, it just seemed natural. On the heels of that announcement, and in anticipation of this month’s physical release of I Speak Fula by Bassekou Kouyate and Ngoni ba, his label’s first record, Kertzer walked City Arts through the many and various African instruments he has collected in his travels, along with his Stratocaster. “This is the instrument I’ve had the longest,” he said. “Got that in the early ’70s.” •

1  Ewe Drums
I played drums for a long time in London, because I found that, to learn to play African guitar, it is really useful to be a drummer because it helps you to understand the complex rhythms. I bought these in Ghana, from an African drum maker.

2  Berimbau
I brought that back from a trip to Rio. That’s a very popular instrument, very identified with Brazilian music.

3 Mbira
One of the first musicians I studied from, Dumi Maraire, is a big influence on me, and he played that one in the middle. The one on the right is a more commercial mbira that I bought in South Africa from Andrew Tracy, who is kind of a famous ethnomusicologist. His father was one of the first people to ever record African music.

4  Stratocaster
This is kind of my original instrument, aside from classical piano when I was really little. I started playing guitar when I was twelve or thirteen, playing in bands. I actually got this one after someone stole another electric guitar I had, back in the ’70s. I played in a lot of bands throughout Seattle in the ’70s and ’80s. The most successful one was a large African dance band called Je Ka Jo. We played shows at the arena and did some big shows at Bumbershoot back in the day.

5  Saz
This is my most recent instrument. I was in Istanbul earlier this year, and I went to a shop and just liked the instrument, so I picked it up. It wasn’t easy bringing it back. Before the rules got strict, I would just bring them back as carry-ons, try to get them into overhead storage. Now it’s not that easy.

6  Ngoni
This is the instrument that Bassekou plays, and that his family plays. They come in different sizes. It’s very difficult to play because there are no frets on it and only three strings.

7  Valiha
This is a tube zither from Madagascar. I went to grad school at the University of Washington and there was this great musician from Madagascar who taught there named Sylvester Randafison, and I got this from him. It’s a beautiful instrument and it’s one of my favorite African instruments. I never studied this to play, though. I did record Randafison once for a CD-ROM I did for Microsoft in ’93.