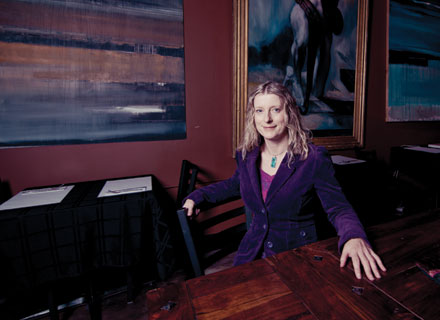 The Grammy-nominated new-age artist takes a break from her inspiration for some relaxation.

The back cover of Henta Ellis’s latest album, Laserium for the Soul, promises to provide “sonic nurturing for your inner garden.” But when I meet up with Ellis at the Little Red Bistro, a cozy café that sits on the corner of a busy intersection in South Lake Union, she looks like she could use a little nurturing herself.

The thin, strikingly beautiful musician is suffering from a mean case of jet lag, the result of her annual holiday visit with family in England and France. She’s trying valiantly to shake off the cobwebs, but I promise to forgive her if she nods off, given the low lighting and the gentle strains of Mozart coming through the sound system here.

Ellis isn’t giving herself much time to recuperate from her trip. She has a video to make for her new album, more music to write and, most importantly, preparations to make for a trip to Los Angeles for the Grammy Awards at the end of January, where Laserium is up for a Best New Age Album award.

“I am amazed,” Ellis says of the nomination, “but really, really pleased. It’s a major milestone for my career right now. It will be exciting to be there and hopefully meet some of the other nominated artists.” Understandably so, considering her competition includes new-age icons such as Japanese keyboardist Kitaro and her personal favorite, cellist David Darling, as well as ’70s and ’80s pop legend Kenny Loggins, a surprise inclusion.

The acclaim being heaped on the album and Ellis is well earned. The UK-born musician is a staunchly independent artist, having self-released three albums that highlight down-tempo electronic beats, lush washes of keyboard noise and her own haunting vocals. She also handles all of her show bookings around the city, which is how she found the Little Red Bistro.

“My husband [fellow electronic musician Marcell Marias] and I organized a dance event here,” Ellis says. “It’s just so cool. You really don’t know that it’s here. It used to be just an empty space. But I just love it.”

It’s easy to see why Ellis fell in love with the place, as it seems to match her personality and music. Both are quiet and understated on the surface but with colorful flourishes. For the café, those flourishes come in the form of the huge oil paintings that adorn many of the walls and the red velvet curtains on each window.

In Ellis’s case, those flourishes appear only when she opens up about her new album, which was inspired by her neighbor, an aesthetician who runs a spa downtown. “She had been playing my previous album [Daisy Dancing, 2008] for her clients because it has a chilled vibe to it,” Ellis recalls. “So, she asked if I could write something specifically for use in a treatment.” She responded by writing an album that would last the length of a typical massage or facial (an hour), with songs created to stimulate the eight main chakras.

By the end of our evening meeting, Ellis looks ready to tap into the soothing atmospherics of her own music so she can get some sleep. She perks up to describe what kind of music she finds nurturing.

“I could be so many different things: listening to some Steely Dan or Pink Floyd. I love Zero 7 or Trentemøller, anything with that deep bass sound. It doesn’t have to be a soothing thing. Nurturing is about therapy, whether that’s making you want to get up and dance or be completely chilled.”

At this point in the night, as Ellis heads for home, it’s obvious she’d prefer it to be the latter. •