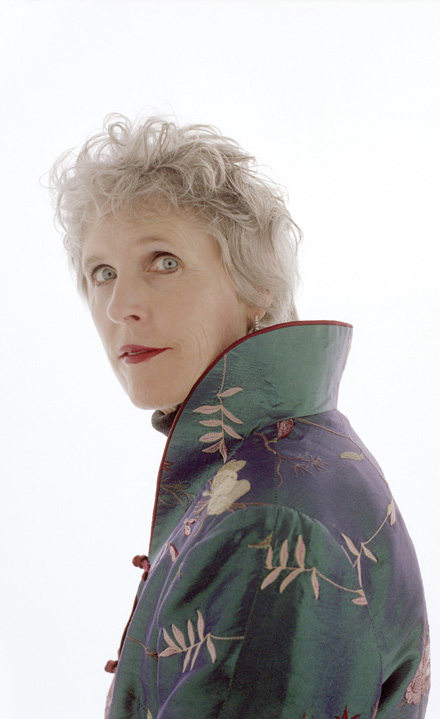 Brenda Peterson was raised to think that the chosen will be swept into heaven. A new memoir reveals how she reversed her thinking and why she now believes the chosen have muddy feet.

In the apocalyptic war between God’s apologists and assailants, Seattle is a major battleground. On God’s side are local writers like Michael Medved and Stephen Meyer, cofounder of the nationally influential agitprop group the Discovery Institute. Meyer’s Signature in the Cell: DNA and the Evidence for Intelligent Design is Amazon’s tenth-best-selling 2009 science book.

Opposing them are writers like Brenda Peterson, whose new memoir, I Want to Be Left Behind: Finding Rapture Here on Earth, critiques her Southern Baptist upbringing; Christian-basher Dan Savage of cable TV and newspaper fame, and Seattle-educated TV star Julia Sweeney, whose autobiographical monologue Letting Go of God is new on Showtime.

The God fight is the central event of our time, splitting our country in half (and the Christian right may soon split the Republican party). Both sides are hopping mad. The Discovery Institute–spawned politician Susan Hutchison claims that when she met best-selling author Richard Dawkins, she tamed his raging atheism by grabbing his face in both hands to make him be nice. He called her “a religious nut.”

In the toxic context of this battle, Peterson’s I Want to Be Left Behind is a tonic, the least acridly dogmatic of the new God books, pro or con. “The problem is, they all get so self-righteous,” says Peterson in her aerie overlooking Alki Beach. Her piercing blue eyes blaze with fervor, but not rage. And her book has humor, which the divine debate could use more of. “Have you ever seen a fundamentalist stand-up comic?” she asks.

Peterson is more of a Northwest mystic than a stand-up comic, but her act has never won more applause. A nature and fiction writer with a respectable pedigree – five years at the New Yorker, one New York Times Notable Book of the Year – she struck a zeitgeist geyser this month with her fifteenth book. It’s earned her best reviews, and it’s her first to be chosen by the American Booksellers Association for the Indie Next best books of the month list. “We’ve had film interest,” she says. Is her suitor a Hollywood name we’ve heard of? “Oh God, yes!” Clearly, Brenda Peterson’s time is at hand.

To understand Peterson, you have to know about America’s most popular new religion: Rapture Christianity. It holds that all Christians will soon be swept alive into heaven, with sinners left behind to be ruled by Satan. Popularized in 1909 by a Kansas City lawyer, Rapture theology reweaves the Bible’s most baffling prophecies into a coherent story and has formed the basis of many literary works, including the popular Left Behind series of novels. Only 39 percent of Americans believe in evolution; 55 percent believe in the Rapture. 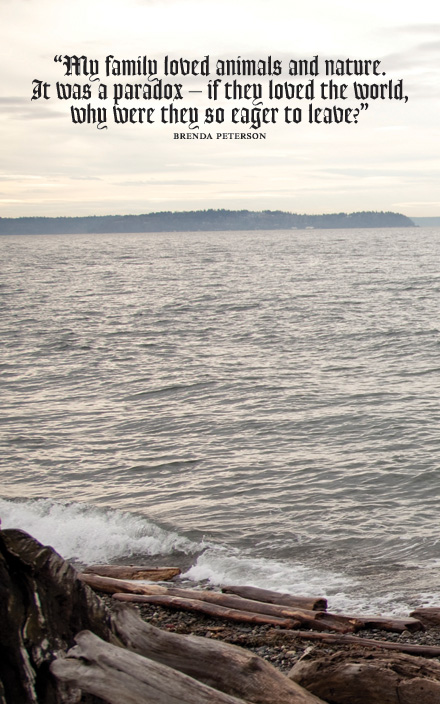 “They say it’s biblically literal, but it’s an edit job,” says Peterson. Even as a young Rapture Christian, she had trouble believing it. “It’s the flip side of Islamic fundamentalism. Each longs for a paradise beyond this earth, and shows no mercy for those left behind.”

Peterson preferred earth to heaven, partly because her Forest Service father raised her in a series of natural paradises. “I was born on a lookout in the High Sierra on the Oregon-California border. There were only ten of us there – it was pretty hard to be too human-centric. The forest got to me before the faithful did. I assumed that everyone experienced the daily raptures I felt.” She couldn’t see the Rapture for the trees, which her dad called “the Standing People.”

“My family loved animals and nature, “ she says. “It was a paradox – if they loved the world, why were they so eager to leave?” Peterson got booted out of Vacation Bible School for thinking flying squirrels miraculous. She was outraged to hear that animals would get left behind. “Why whisk only humans off to heaven? What kind of Rapture was that?”

When she was in the third grade, her father took a fellowship and whisked the family off the mountaintop. “We put on shoes and went to Harvard. It was a shock.” Then it was off to Montana, then Virginia. “I went to sixteen different schools.”

Even when they were not in the Bible Belt, her family was a traveling bubble of Southern Baptist values. But their Rapture lessons failed to take, and nature remained her true religion. When she snuggled in her Montana Sunday School teacher’s grizzly-bear fur coat to get warm, she felt close to the grizzly, but the Bible lesson left her cold. While working at what she calls “a Southern Baptist boot camp” in New Mexico, she got fired for bringing food to indigent native tribes and writing a poem called “Jesus Had Dirty Fingernails.”

Her dad complained, “Your mind is so open it’s one big hole.” But as she points out, “It’s hard for dogma to take hold when you’re constantly in culture shock.” In tenth grade, they moved to Berkeley. It was the ’60s, when folks were beginning to call it Berserkley. “That’s when my family thinks I got lost. I actually got found.” 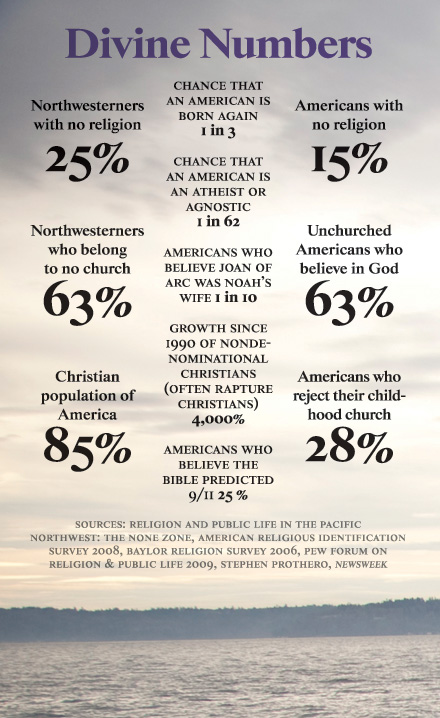 She was discovered by her University of California writing professor, Diane Johnson (Le Mariage, The Shining screenplay). In 1972, Peterson speed-typed her way into a coveted job in the New Yorker typing pool, rife with future novelists. “It had its own dogma, language, dress code.” It wasn’t a magazine, it was a religious order, and novice Peterson worshipped literature under legendary editors Mr. Shawn, Jonathan Schell and Pauline Kael. “[Pauline] put her elbows into my shoulder and leaned over to make sure every word of her Last Tango in Paris review was correct.” It was like a mad monastery: one writer lived in the ladies’ room; another imprisoned his mom in his office; a third knocked Peterson and editor Edith Oliver over with a bookshelf. “They were all so eccentric, but it gave me permission to understand that art is all about imagination – not answers, it’s all about questions.”

But it was tough to live on eighty-eight dollars a week – as a shocked Oliver gasped, “You mean you live on your salary?” Peterson puzzled her urban colleagues by planting a garden inside the New Yorker office. At the chilly dawn of Ann Beattie minimalism, the fiction department was stony soil for Peterson’s Southern-fried maximalist imagination. Her boss said, “Lose the Southern accent, people will think you’re stupid. Start covering Manhattan cocktail parties.” Peterson didn’t drink, which was like refusing to take communion. Her first novel, River of Light, had Bible Belt characters who said things like, “It’s rainin’ like a cow pissin’ on a flat rock.” Not in Mr. Shawn’s magazine they didn’t.

In 1978, God smiled on Peterson. New Yorker editor Rachel McKenzie, discoverer of Muriel Spark and Philip Roth, volunteered to edit Peterson’s book for free. “I said, ‘Oh, thanks!’ I didn’t realize it was thousands of dollars’ work she was offering.” And more: McKenzie hooked her up with John Updike and Julia Child’s editor at Knopf, the magazine’s preferred publisher.

McKenzie’s fondly inscribed portrait rests on Peterson’s desk in Seattle, where she’s lived since 1981 – longer than anywhere else on earth, her own promised land. She looks out on an Alki beach she’s helped make a National Wildlife Federation sanctuary for baby seals, watched over by her group, the Seal Sitters. “It’s just neighborhood folks taking care of seal pups while their mothers are fishing.” The scene is the subject of her next book, Pups on the Beach, due out next year.

I Want to Be Left Behind begins and ends on this beach, where she and her Rapture Christian seal-sitter friend George debated the End Times while trying to keep pups alive. She told George, “We would all miss you so much if you zipped up to heaven. We’d say, ‘Well, there goes the neighborhood.’” 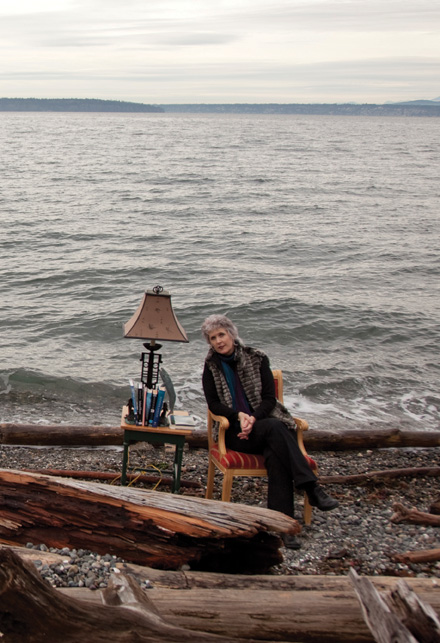 Peterson’s is a more loving rejection of Rapture Christianity than most of its opponents can manage. Her environmentalism is also cheerier than is typical these days. “Environmentalists have become increasingly fundamentalist,” she complains, “full of fundamentalist End Time scenarios. I think people are tired of being scared to death, of red alerts and orange alerts.  I want to be here on earth exploring and imagining other futures than extinction or heaven. Our religions are too focused on fear and death instead of life and joy.”

Peterson loves to get together with her Christian relatives and sing old hymns like “This World Is Not My Home, I’m Just Passin’ Through,” even though this world is her home. She says they argue constantly, “as if their afterlives depended on it.” But in between, they sing hymns in multipart harmony.

Instead of another volley in the God wars, her book can be seen as a kind of peace offering. She makes you think maybe everybody is in more harmony than they think. Who knows? Maybe the arguers are actually singing to the glory of what some call God.

In any case, I Want to Be Left Behind proves Peterson’s old college anthropology professor was right. He said, “She has a gift for rapture.” •