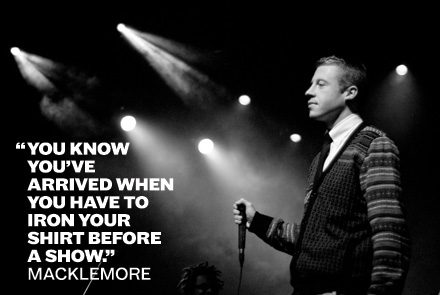 SHOW YOUR SONG
At the inaugural episode of The Song Show at the Triple Door in Downtown Seattle last month, red-hot emcee Macklemore (above) performed with his band for a packed audience between onstage interrogations from City Arts contributor Todd Hamm. Photograph by Victoria VanBruinisse

THE YOUNG AND THE PANTSLESS
Joining five thousand pranksters in forty towns around the world, dozens of people assembled at Westlake in their unrevealing undies for Seattle’s first No Pants! Light Rail Ride. The event was founded in 2002 by Manhattan college student Charlie Todd, inspired by Andy Kaufman and the Flaming Lips. In Seattle, it looked more like “The Freezing Legs.” Photograph by Victoria VanBruinisse

GRUNGE BEFORE PUBERTY
A gang of little kids from the School of Rock invaded the Crocodile in Belltown to sing classics by Nirvana, Pearl Jam and Soundgarden unnervingly well. The Long Winter’s Eric Corson helped them sing his band’s hit “Shapes.” Why did it sell out? “Epic amounts of cute,” says City Arts photographer Victoria Vanbruinisse. Photograph by Victoria VanBruinisse