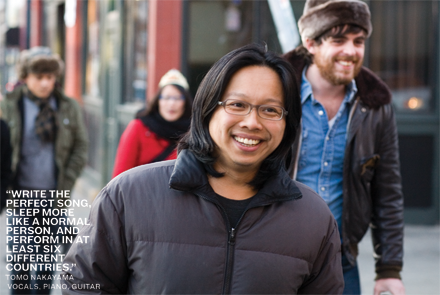 Building a Grand Hallway
It takes a village to make Tomo Nakayama’s music. 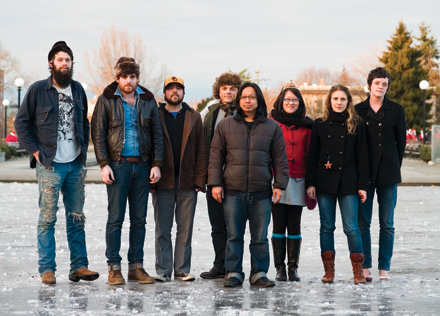 The ballard home where the members of orchestral pop collective Grand Hallway spend much of their time is a collection in itself: a fake deer head hangs on the wall, a realistic (but fake) gun sits on a ledge. There’s an old couch and a coffee table loaded with magazines. The kitchen holds a 1950s-style kitchen table and a sign that reads “Scenics and Animals.” Much like the music churned up by the house’s inhabitants, it’s a little bit rural, a little bit indie rock, populated by a creative mix of idiosyncrasies and used furniture. On a recent December night, singer-songwriter-multi-instrumentalist Tomo Nakayama sits in an old green chair, with keyboardist and accordion player Shenandoah Davis on the floor. The primary spokespersons for the band, the duo answers questions while others in their band work downstairs, printing T-shirts for the tour the band departs for in the morning. The rest of the band is out at the bar. Between the house, the buzzing community vibe and the eight members, one gets the impression Grand Hallway is equal parts band and small village.

It’s been a big year in that village. Grand Hallway’s second full-length album in as many years, Promenade, has earned positive reviews from regional press. The band has played packed sets at Sasquatch and the upper-echelon music clubs in and around Seattle. The band members are gearing up for tours of Europe and Japan this spring, and they have earned their place among the best-sellers at local record stores. It’s not the first time anyone in the group has turned heads in the Seattle music scene, either. Grand Hallway’s members have come together from some of the finest bands and side projects to have graced a Ballard Avenue stage in recent years. 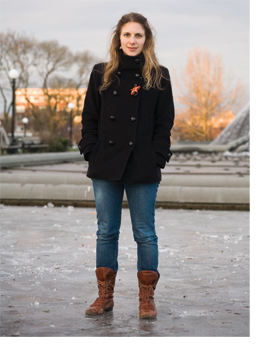 Less than a week after City Arts met with the band, the Seattle Times ran a piece about “Seattle’s musically promiscuous community.” The local music scene, the article argued, has become more about collaboration and community innovation than about competition. Grand Hallway is a perfect example. Since releasing the band’s debut album in 2007, Nakayama and his seven collaborators have solidified a style all their own through that sense of collaboration. Equal parts jazz, orchestral pop, rock and folk musicians, Grand Hallway’s members pull influence for their impressively layered arrangements from their other bands. Before starting the band, Nakayama played with Asahi, Jen Wood and the Maldives. He brought along Voyager One guitarist Jeremy Koepping, roped in Maldives multi-instrumentalist Chris Zasche and plucked Davis from Jack Wilson & the Wife Stealers.

Though he’s eager to credit Grand Hallway’s collective craftsmanship to a team effort, Nakayama is undoubtedly the creative center of the group, bringing a lyrical economy inspired by Neil Young and John Lennon and an unruly sonic vision similar to that of Andrew Bird and Joanna Newsom. Trained early in life on the viola, then on the violin and then the guitar, Nakayama first experimented with recording as a teenager, when he would create layered compositions on a dual cassette karaoke machine. Those rough mixes no doubt gave rise to an interest in songwriting, a talent that has grown to become somehow both meticulous and unhinged.

Sitting in that green chair, Nakayama looks understated. Except for the infrequent hand gesture, his body is still. His voice is full of quiet intention, the kind that pulls you closer to listen harder. It’s a far cry from the wailing storm of wild energy he unleashes onstage. All the frantic rhythm and passionate noise that happens when he steps to a mic appears to be zipped carefully beneath a suit of calm and control.

Maldives guitarist Jason Dodson recognizes the careful shaping of Nakayama’s energy, the way his creative aplomb has evolved from band to band, not solely via his songwriting, but also by his evolving collaborative spirit. “A lot of folks who come out to see a Maldives show have seen Tomo jumping around, banging on a snare drum, acting like a man possessed by the power of rock ‘n’ roll,” Dodson says. “In Grand Hallway, that energy translates a bit differently. It’s more intensely personal, more confessional, less hysteric, yet completely captivating.” 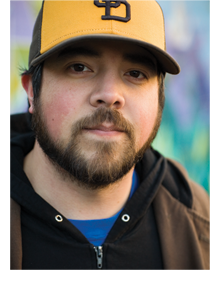 That Nakayama’s songs come off as intensely personal is due in no small part to the instrumentalists with whom he has surrounded himself. It takes a solid foundation to support a sound at once so delicate and provocative, stirring and sincere. Nakayama admits that, when starting Grand Hallway, he didn’t go in search of a crew of backup players so much as fellow artists who could outshine him if they wanted. “I decided to play with people who were better than me at what they do, so I wouldn’t have to tell them what to do,” he says. “It’s got to a point now where I hardly ever tell people what to play. Everybody just contributes their ideas, and then we edit each other’s parts. It’s a lot of fun, and I think I don’t take myself as seriously as I did when I was younger [in Asahi]. I trust my bandmates to know what they’re doing. I feel like nobody in the band really needs to be in this band to validate their existence. The fact that they don’t need me makes me want to work harder to make their time worthwhile.”

Talk turns to the complicated inspiration that comes from being a songwriter-cum-instrumentalist in someone else’s band. Having been there himself, Nakayama appreciates the input and influence of the other songwriters in Grand Hallway. While he is the conceptualist and chief writer, he’s more than happy to open up his songs to the natural evolution that eight players bring to them. Davis, whose debut solo album We;Camera is packed with its own collection of inventive and intensely poetic arrangements, finds her supporting role in Grand Hallway creatively challenging and inspiring. “[It requires] a different way of thinking,” she says. “Going from playing by myself to playing with seven other people, coming up with different piano parts for Tomo’s songs than I would for my own … there are so many other instruments, the songs are structured in a way I wouldn’t have written on my own, and Tomo’s voice is different from mine. He writes different melody lines. Everything about them is different. The parts I come up with are things I think are cool, but I never would have thought them up if I was just hanging out at a piano on my own, trying to figure something out.” 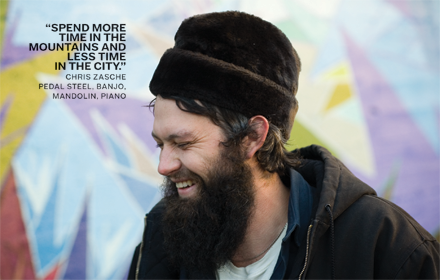 Nakayama adds, “Everyone’s contributing ideas from so many different musical backgrounds. In the past, the arrangements I was writing were limited by my imagination and the music I’d been exposed to at the time. Now, [playing with all these people,] the music is a lot less predictable.” And yet, there’s something about Promenade that feels surprisingly palatable. In all its unpredictability, the album is accessible, catchy even. “Elinor with the Golden Hair” is so syncopated that when it really opens up at the end, it feels a bit like a charming, broken windup toy that keeps running into walls. Still, each of its numerous contrasting motifs and rhythms flows seamlessly into and through the others. It’s hard to imagine such a song being born of one man’s creative impulse. Indeed, such accessibly complex music can only be the product of a free and open collaboration.

The thing about a Hallway is that it’s defined by the rooms between which it runs. Hallways imply movement; standing still in one is pointless. As a name for Nakayama’s band – whose members are constantly in transition – Grand Hallway is apt. “One of the violin players plays with a few different symphonies,” Davis says. ”One of them writes music and sound effects for video games. Joel [Harmon] is a security systems salesman. It’s all over the board. Outside of the band, everyone’s interested in different things musically, so it’s fun when we come together to practice or hang out, to find things in common with someone you wouldn’t have bothered to get to know otherwise.” 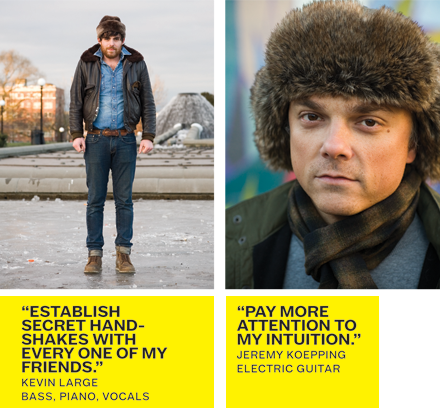 Aside from the music they make, the one thing Grand Hallway’s members do have in common, says Nakayama, is that “there are no assholes in the band.” Back on the subject of community and collaboration winning out over competition, Nakayama bristles at the notion that there must be some dramatic tension behind the scenes to make the music interesting or the stage show provocative. “I get frustrated with bands that have to have some sort of backstory to make them interesting. What does that have to do with the songs? Who cares what your home life is like or what drugs you’re using? You’re in rehab? Cool. Keep it up. That’s an awesome story as a person, I guess, but not as a musician. That has nothing to do with the songs you write.”

In Nakayana’s opinion, the most interesting thing about the group he’s built is “the fact that we found each other through all these different bands we’re in. We still have multiple projects, but this is something that’s important to all of us. I think it’s how strong the community is in Seattle. Not even Seattle as a whole, but this niche we’ve built for ourselves.” 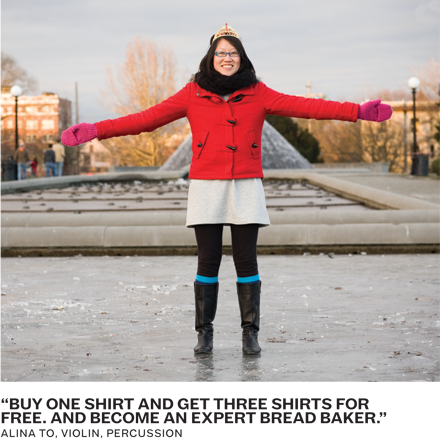 Despite the fact that she admits Nakayama is “the wizard behind the curtain,” Davis feels encouraged by spending her time and talents on a band and community whose intentions are so well aligned. “Everyone is invested in it. Everyone is putting a lot of time and thought into it. We really care about it. It’s not like Grand Hallway is Tomo and seven other people. We’re all involved in it, we’re all working on it, we’re all accomplishing this together.”