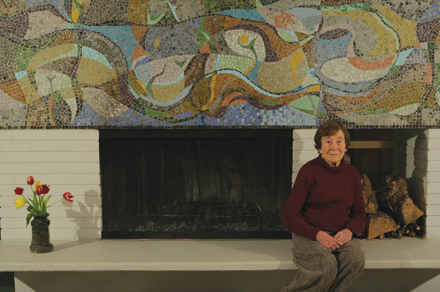 When other future Seattle painters were in art school, teenager Marika Frank spent 1944 to 1945 in Bergen-Belsen, where Anne Frank died, and in the death camps of Auschwitz, where her mother and father were separated from her and killed (as were thirty-three other members of her family). Anne Frank (no relation) had kept a diary during her time in hiding; Marika had art to keep her going in the camps. “Women would come to me to ask me to draw the kinds of clothes you wore in normal life,” she shared with Steven Spielberg’s Shoah Project in 1995. Lacking canvas, she drew on rags. After the war, she moved to Germany, but overhearing the remarks of her anti-Semitic art school classmates scared her.

So when the Hillel Foundation gave her a scholarship in 1948 to study art at the University of Washington, Marika accepted. She married Syd Abrams, the future distinguished Seattle wine industry lobbyist, and became Maria Frank Abrams, American. Some time later she bumped into titanic Northwest art icon Mark Tobey at the frame shop on the Ave. He gave her painting lessons and bought her work. Since that fateful meeting, she has had 194 shows at Seattle Art Museum, Otto Seligman (Tobey’s gallery), Israel’s Yad Vashem Museum and elsewhere. She won one of the first four King County Arts Commission awards in 1976. Her career capstone is her upcoming 2010 show at Woodside/Braseth Gallery, and the big new book Maria Frank Abrams: Burning Forest by Matthew Kangas just went to the printers.

“A true survivor!” marvels John Braseth, co-owner of Woodside/Braseth. “What a story.” Kangas calls her “a transitional figure,” halfway between Tobey’s naturalistic formalism and the more astringent abstraction of artists like Francis Celentano.

So why, at eighty-six, on her 195th show, isn’t Maria Frank Abrams more famous? Partly, it’s because she isn’t a guy. A not very respectful review of her 1961 solo show by Seattle Times art critic Anne Todd says it all: “Even though Mrs. Abrams is a mother, she also considers herself a painter.”

But there are deeper reasons why Abrams isn’t one of the Northwest School’s usual suspects. Though she kept painting, she retreated from the art world’s inner circle. “I was represented by the best gallery in the Northwest,” she says in Sylvia Rothchild’s Voices from the Holocaust. “I could be quite successful as a painter, but not make enough money to live on.” Even the top artists in town – Tobey, Morris Graves, Kenneth Callahan – only scraped by thanks to SAM director Richard Fuller’s generous checkbook. So Abrams went to UW library school, made sets for Seattle Opera, enjoyed life and painted with less self-promotion than some. 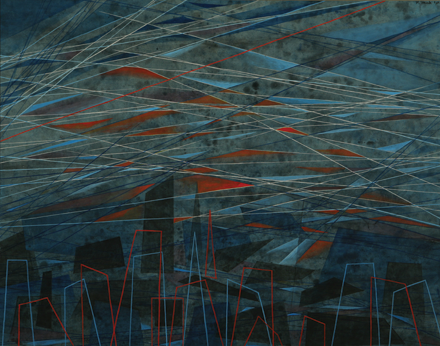 She was also so good at soaking up styles, she had a hard time defining her own. “She is a bit derivative of other artists,” says Seattle dealer David Martin, “and perhaps that is why she is less known.” But her playful variation on Tobey’s “white writing” – calligraphic brushstrokes against abstract backgrounds – looks great today, and her later, lighter, brighter, Mondrian-inflected style of abstraction often has the rich tactile quality of textiles.

Her generation’s styles are utterly unfashionable nowadays, which may be why fifteen important critics and curators declined to talk with me about her work, even if they had written about or exhibited it. It deserves a closer look.

Tough as it was for Abrams to step out of other painters’ shadows, it was tougher to escape the Holocaust’s shadow. Syd Abrams says that when she first got here in 1948, she tried to use her grisly past as grist for art, but gave up. “When somebody said a painting was about the Holocaust, she said, ‘I’m not a good enough painter to paint something about that.’” Seattle’s longest-running gallerist, Francine Seders, who bought Seligman’s gallery, recalls, “She did not speak much about her experience during the war.” What she mostly said was what she flatly told UW Holocaust scholar Deborah Lipstadt in 1976: “I never paint about the Holocaust.”

Since a stroke has made her too ill to be interviewed at her Mercer Island home, we’ll have to piece together what Abrams’ work means for ourselves. Many viewers insist she did paint about the Holocaust. “She repressed it,” says Kangas, “but it kept seeping through anyway.” Kangas’s book is full of examples of Holocaust imagery so cryptically painted the artist may not have seen it herself. Lipstadt persuasively argues that Winter Woods, painted in 1975, depicts not a winter woods but what Abrams said was the worst time of day in the camps, the roll call in the freezing dawn. 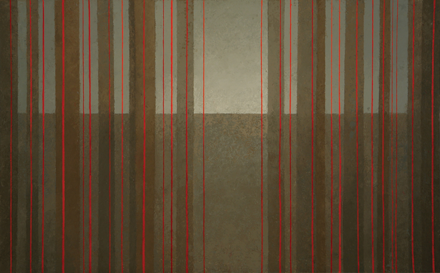 Kangas fascinatingly compares Abrams’ 1978 painting Electric Night with Mark Tobey’s 1944 painting of the same name – and with a photo of the cemetery full of her relatives in the Jewish ghetto of Debrecen, Hungary, her hometown. “The Seattle cityscape is transformed,” Kangas writes, “into a combination of past and present, Seattle and Debrecen, tokens of the living and dead.” You can’t look at Abrams’ coffinlike trapezoids and not see the tall Debrecen tombstones.

Unless your name is Abrams. “Her husband Syd was so startled when I said that,” says Kangas. “He said, ‘No! No! No! None of that’s in there! She never said that!’ Of course she didn’t! It’s unconscious.”

The evidence is inevitably ambiguous. It’s possible that we read too much into Abrams’ paintings, projecting Holocaust imagery onto them. Kangas sees in her 1986 Untitled (Red and Gray Lines) abstraction red lines signifying blood and dark bars like a camp fence. “Could this area that weighs down the overall image be the accumulation of ashes from the crematoria?”

Could be. Or not at all. Either way, right or wrong, what people think and feel about the Holocaust has informed how we see Abrams’ work. It has both elevated and limited her reputation.

Moreover, the Holocaust influenced her aesthetics in a way that kept her fame snugly contained. Her paintings, says Braseth, “reflect the positive in life, which has kept her more obscure.” Having craved normality and beauty in the camps, she found it in Seattle, and the experience affected her. “In just a few months,” she told Seattle Weekly’s Laura Cassidy in 2002, “I was responding to the landscape and this light. It was very consoling, like a healing process … I began creating things that were harmonious and peaceful. That was my desire – for life to be like that. That’s what I was painting and not the horror.”

This proved to be a bad career move. If there was anything postwar art was not, it was peaceful. “I do not want to sound harsh,” says Seders, “but I only remember pretty little paintings, nothing particularly breathtaking.”

But much of her work is both pretty and breathtaking. In fact, it’s more interesting psychologically precisely because of the insistent heavenly prettiness that bedevils it. Her 1986 After Winter Storm is emotional and brooding, bare limbs in a romantic light like the glowing orbs of Arthur Dove, but without his immediacy. She edits everything, glossing over something deep, dark and unseen. You have to look hard, past the comfort and order, to see, not necessarily coded Holocaust imagery, but a sense of something scary she’s keeping at bay.

In 2002, after the Spielberg Survivors of the Shoah interviews, Abrams at last relented and addressed the horror directly. In her landmark 2002 Nordic Heritage Museum show, she made collages using blown-up photos and postcards from her relatives lost in Auschwitz.

But her art is really from here, not there, says Syd Abrams. “When Matthew [Kangas] went to Hungary, I said, ‘Why are you going there? If you want to see her influences, go to Luther Burbank Park, or take a look at the gray sky. Two things always bothered her: to be called a ‘woman painter’ or a ‘Holocaust painter’ instead of just a painter. She’d have very commercially successful shows, but the reviewers would talk about the Holocaust, not the art.”

Syd says she likes my theory that her art springs from the healing gray beauty of her adopted Northwest home. “She smiled. I can assure you that if she wasn’t pleased, there wouldn’t be the smile.”