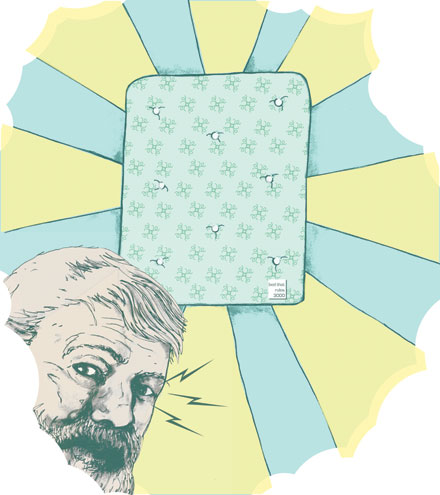 At a recent symposium I attended, the talk backstage among my fellow authors included the usual chatter about movie options, overly aggressive agents and the continued struggles of the independent bookstores we love. Yet when we weren’t talking about the business of writing, we were discussing a topic more common to a locker room full of retired athletes: aching knees, hip replacements, sore backs and strained necks. Some of these osteopathic ailments can be explained by the fact that most successful authors have been at it a while, with gray beards as common on the podium as corduroy jackets. Perhaps many of the same issues would come up at a conference of, say, distinguished and aged plumbers, but I doubt it. One Seattle physical therapist I know — who sports three New York Times best-selling authors among his clients — told me that sitting at the keyboard was harder on your back than professional boxing.

I’ve never done any boxing, but Ernest Hemingway famously tried to teach Ezra Pound the sweet science with little success. No one knows whether it was boxing, fighting fascists, alcoholism or writing that damaged Hemingway’s back, but he had so many problems he began to write standing up. I tried that myself, but I paced all day. I did discover, a few years back, that taking a month off to move — and carrying heavy boxes all day — was easier on my body than the heavy lifting of coming up with metaphors and similes at my iMac.

So when a writer friend suggested I try a new mattress, I trotted off to the local mall to do some prone research on those adjustable inflatable beds. Buying a mattress is harder than purchasing a decent American-made car, and as the salespeople immediately pointed out, you spend a third of your life in bed. A mattress is also not the kind of purchase you can easily exchange, a lesson I learned taking one back to Costco once. As I stood in the return line, with the gigantic mattress hanging over the side of my bright orange cart, the shoppers leaving the store looked at me as if they had never seen a mattress before, or at least never seen anyone with the gall to return one.

To avoid a repeat of that tragedy, I visited my inflatable-mattress store several times over the course of a week, bringing along a nineteenth-century English novel, exactly the kind of reading material that put me to sleep in college, when my back felt better. By my third visit, I knew the salesperson well enough that I could recite her whole life story, which included a multi-year stint as a stand-up comic. I jokingly asked her if being a woman in a predominantly male field meant she had to spice up her act. Her response: “I was dirty, not because I had to be, but because I liked it.”

On my fourth visit to the store, when I was one chapter of Thomas Hardy away from actually buying a bed, Miss Potty Mouth was again on duty. That day the store was as crowded as the Tukwila Denny’s on Mother’s Day, and, much like an overworked waitress, the salesperson had that glazed look in her eye as she tried to help several people at once.

I patiently waited and started playing with the air pump on a bed, when a woman came up to me and asked how it worked. Perhaps I looked professional, or my black sweater made me look like an employee, but to fill the time I helped her learn how to use the bed. I had her lie down on the mattress, and I showed her how to use the remote to control the firmness. I told her the pricing structure since I’d memorized it for various sizes. She wanted to try another model, so I moved her over to a plusher pillow-top and showed her how to operate that.

Meanwhile, the erstwhile stand-up comic was still helping another couple, but she gave me the same “thumbs-up” sign that President Reagan offered after being shot, so I continued demonstrating the beds and showing off the features. It was clear that my potential customer thought I was an employee. She was not a native English speaker, but I was able to communicate effectively with hand gestures. Beds are not as complicated as computers, so even with her limited English, I was able to demonstrate the pump.

After I had shown her every bed in the store, while Miss Comic kept giving me the thumbs-up, my potential customer announced that the top-of-the-line five-thousand-dollar model was the one for her. “I come tomorrow with husband,” she said. “I buy.” Great, I told her, the economy needs the stimulus. Then she put her finger on my chest and asked, “I come for you?” Either this was a marriage proposal or she thought I worked on commission. I couldn’t tell her I didn’t work there; the deception had gone on way too long. “I ask for you?” she asked again. “Sure,” I said. “Ask for me.” “Your name are?” she asked once more. “Just ask for Charles,” I announced. I declined to give her my last name, thinking that if she googled me, she might find some nasty reviews of my last book, and that might lower her opinion of salespeople in general. 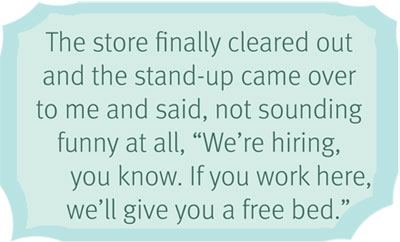 After my customer left, the store finally cleared out and the stand-up came over to me and said, not sounding funny at all, “We’re hiring, you know. If you work here, we’ll give you a free bed.” It says a great deal about how hard the work of writing is, and perhaps how less-than-lucrative it is at times, that I actually asked her if that offer was for part-time employment. It was only for full-time, she informed me, and I quickly realized that I was not yet destined to work in retail at the mall. My Willy Loman moment was over.

I don’t know if my customer came back the next day and actually bought a bed, and if she did, I don’t know whether she was disappointed that her favorite salesguy was gone. Still, I bought one of the beds. It’s only been a week, but it gets my provisional thumbs-up. Later, I called up a comic friend of mine and asked if he knew the comic salesperson. “She’s very funny,” he told me, “but positively filthy in her act.” I’m sure when she goes back on the road, working in a bed store will give her some ripe material, just as I had hoped it might give me.

If my bed doesn’t work out, there is a thirty-day return policy, a point that I emphasize with all my customers in the mall, even the ones that don’t understand English well enough to know what I’m saying. If the bed doesn’t work out, I’ll be back at the mall, but instead of working there, I’ll have a king-sized mattress draped over a shopping cart that I’ll be maneuvering through the throngs. Would Hemingway have done any less?