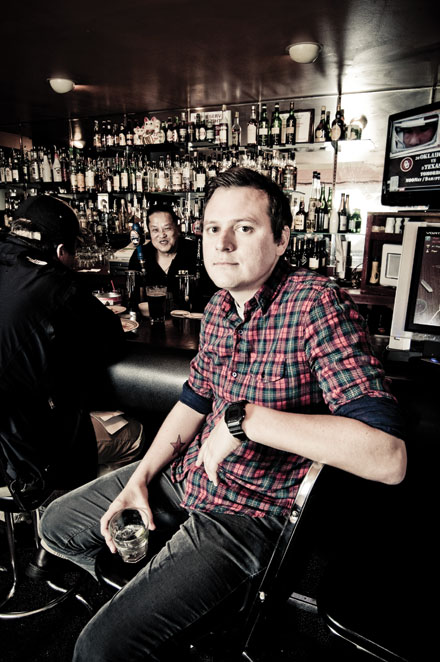 It’s been just a month since your radio show, Too Beautiful to Live, was unceremoniously bounced from a daily broadcast program recorded at the KIRO studios to a podcast recorded in your home office. How has that transition treated you?
I have to say that the podcast is so much work. I’d say, conservatively, I am doing four times the work I did on the radio show. I think that the problem with a lot of podcasts is that it’s just a guy who may or may not be wearing pants, hunched over the computer microphone doing some horrible commentary on the world, saying, like, “Give me a break Paris Hilton,” and you hear his mom opening the door in the back. There is no production value. Some people can do that well. But I’m not that smart and not that funny and not that well known, so I have to make sure I have a really clear plan.

Can you describe what your studio setup is like?
The setup at home is getting upgraded, which I am pumped about. But right now the studio is in my office, in my house, on a table I bought from Ikea for sixty dollars, and it consists of some leftover materials from KIRO. This is the stuff that they didn’t think was quality enough for the live remote from the Boat Show. And I bought a Mac Mini to record everything on GarageBand and I have a webcam. I also bought a rug from Ikea. And there is a bathroom attached to the studio.

You have guests in your studio. Do you make them pancakes?
No, but one of my major concerns every day is, Is the house clean? So, I’ll be in bed and maybe I’ll want to sleep for five more minutes, but I’ll have a guest — and we’ve had some really good guests, like Ira Glass and Adam Corolla — and my concern is not how should I prepare for this interview, but how many dishes are in the sink.

Is it embarrassing?
No, because my home is really cool.

What is your selling point for getting guests to come on?
Well, we are averaging well over one hundred thousand downloads a week. That’s a lot of people. But most of the big names I have gotten already — Ira, Anthony Bourdain — those are people I already know. So, I have been calling in every chit I have. Going forward, if anyone is resistant I just tell them that we reach a ton of people now, more than we did as a radio show.

Is this the first time in your career that you have been bumped from the airwaves?
It is. I’ve never been told before, “You’re not doing this very well. You can’t do this anymore.”

What did your managers want the show to be?
They wanted more of a focus on local news. More coverage of dumpster fires, because they aren’t going to cover those themselves. More of, “When news breaks, we fix it.” Stuff that I wasn’t interested in doing. And I knew that, even if we had done this stuff, we might have been able to bump our ratings up from twentieth to seventeenth in our time slot. And it didn’t make sense to make those changes for such a small gain on the radio when we were seeing consistent gains with our podcast audience.

Where does your obstinate streak come from?
I have two motivating forces in my life; they are revenge and vanity. That’s what get’s me out of bed in the morning. So, on the vanity side, I couldn’t the show from a tire center in Federal Way because it would embarrass me in front of my friends. And I couldn’t do an interview with Matchbox 20 because my friends would hear it and be like, du-u-ude. I wish I was more principled, but that’s it. I’m very prideful and very vain, so to do a show that was corny just so I wouldn’t get fired, wasn’t an option. I mean, we did corny shows, but not ones where we knew it was going to be corny from the start. I mean, we never had an interview with, like, the kid from Two and a Half Men.

It used to be that when a personality got booted from radio, they were just gone and the audience had to find someone else on the dial. How has podcasting changed that dynamic?
There was a time when – and this was about 2 years ago – but there was a time when you would hear that somebody got laid off and they would be like, “I’m gonna do a podcast,” and they would start a janky Web site and they would do one update and then they wouldn’t do another one for three months. And it was like, well, have fun with that hobby. It just didn’t catch. It was like, let’s be honest, no one is listening; it’s not really a viable alternative. But now, it’s about to become a really big alternative on the podcasting side. There are a few people that are making a lot of money at it. And then there are a few people that are right on the the edge. Like, if we are getting 400,000 downloads a month, and if that really represents 100,000 people who download the show throughout the month, if half those people were willing to pay one dollar each month, that’s $50,000 a month. That’s way more than I make. That’s not what is happening now, but I think that we are getting to the point where this could become a real way to make a living.

So, are you fantasizing about monetizing Too Beautiful to Live or are you actually figuring out how to monetize it?
My personal little timeline is that, in the first month, I just wanted to get the show mounted each day and on the air. Now that I feel like I have a pretty good handle on how that works, the next three months, until January 1st when I am officially off of KIRO’s payroll, will be spent figuring out how to make money on this. The problem is that you can not charge for podcasts on iTunes, so you have to do merchandising or, hell, you can do a pledge drive. I mean, I used to work in public radio, I know how that goes. But to me that is Plan C. I definitely want to do it in a classier way. There is another option where we might just keep working for the KIRO website, because they are super pumped about the show; it’s driving increasing numbers of people to the website. All they have to do is sell a couple ads on the podcast and they will have cleared the show budget of TBTL; it’s not a very expensive show to put on. And it’s possible because the website people are not the same people as the radio people. They have their own budget because they generate their own money. They might just resign me as a podcast. And I’ve had a lot of meetings with other people about this, and some with people who run websites and want me to bring TBTL over. So, no matter what, I think that the show will live on. Even if I get another radio job, I’ll still want to come home and night and do TBTL.

You’re the Golden Boy.
I think I was Golden Boy. I was definitely Copper Boy. But here is the thing; if you’re just the regular radio guy who goes on the air and yells about property taxes, and you get fired, I think it’s really bad. But if you are doing something that is kind of weird and people recognize it as weird, you will find somewhere else to go. I know it will sound cocky, but I think that, though it lost in the ratings, TBTL had a kind of panache that I think other people in radio are kind of into. It’s so rare that anyone gets to do anything weird.

Too Beautiful to Live streams live every weekday at noon. Go to tbtl.net to listen to new shows and the archives. Might we suggest you listen to the show from November 16, wherein Burbank describes his experience giving a crack dealer a ride home at 3 in the morning.