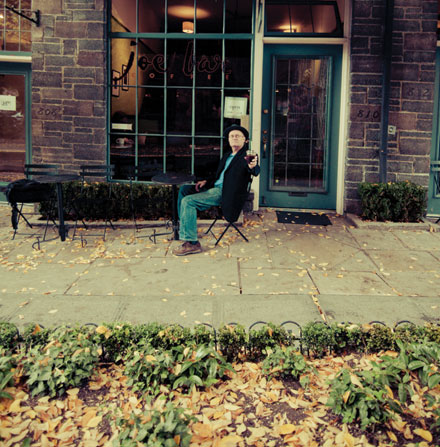 Joe Bar, across the street from the Harvard Exit, Seattle’s venerable art theatre, is the ideal spot to rendezvous with Seattle’s venerable art filmmaker Karl Krogstad. He’s there so much he orders a special crepe by name, the “Karl Krogstad.” It mixes ingredients eccentrically, just like his experimental collages, dramas, animated romps and documentaries, as well as his first book, Shot to Death: How and Why Karl Krogstad Makes Films. This month he screens six flicks at Tacoma’s Grand Cinema, and he unveils forty-three of his paintings at Two Vaults Gallery on November 19.

When I take two-thirds of the Krogstad crepe, he protests. “Take more!” That’s what he’s been saying to film fans since 1968. “I’ve done twelve short films in the last five years.” he says, “and I do about sixty paintings a year.”

And how many films has he made since 1968? “Aaugh! When you get old, you don’t know anymore. Over seventy.” He’s sixty-one.

The last time I saw Krogstad, in 1986, he was laughing like a madman while directing Debra Winger, who asked me, “Do you want me to unbutton my pants?” Disappointingly, she wore pants that, when unbuttoned, only revealed a foldout fabric pouch. She disappointed Krogstad too. “My experience with her was extremely negative. The real magic is somewhere else.”

The Winger video, scripted by their mutual friend Tom Robbins and shot to a click track, then shopped around for matching tunes, almost became a Randy Newman project. But Newman was getting divorced and depressed. “I’ve never seen a more sad person, and I was clumsy. If you could go back in your life…I’ve met an enormous number of people, big people, that I wish I’d handled differently. I mean, I was the guy who told B. B. King what music video was. I spent a day with Bonnie Raitt. I was not taking her seriously, and that was stupid.”

He could have ridden music video to the top of Hollywood like David Fincher or Spike Jonze. Or he might have made it like his friend Gus Van Sant, who has seen all Krogstad’s films, wrote the introduction to his book and sees him annually at the joint birthday party Krogstad throws for himself, Van Sant and Tom Robbins.

“One year Tom brought Debra Winger,” Krogstad recalls. “It was hard to see her.”

Krogstad had torpedoed an even better chance at the big time in 1973, when he used to take regular meetings with the great cinematographers — about forty geniuses, from Sven Nykvist on down. One day he decided to see how animators filmed the Pillsbury Doughboy. Some guy named Peterson called Krogstad up to his office to show him the commercials he had made for Japanese TV — as wild as anything Krogstad had concocted. Then Peterson said, “I want to hire you as a director.” It could have been an entrée to mainstream Hollywood work.

“It’s 1973, OK? I’m really young,” says Krogstad. “I said, ‘I’d like to get better at what I do. And I don’t see myself moving to LA. Give me another year or two.’”
Krogstad says the friend he was staying with was horrified. Here’s how Krogstad recalls the conversation going:

Krogstad: I met Peterson.
Friend: YOU MET PETERSON? He’s
the biggest commercial maker in LA! He’s like Howard Hughes! No one has met him, ever.
Krogstad: Well, he offered me a job.
Friend: Did you take it?
Krogstad: I said I’d wait and think about it.
Friend: [Pause.] OH NO!

“Do you regret it?” I ask Krogstad.

“No,” Krogstad replies. “All of my life has been this amazing success. I think it’s my Norwegian side that lets me turn down things other people would never turn down. Also, I have a huge problem with suits.”

Krogstad does have some regrets. “I owned eight houses in Seattle,” mourns Krogstad. Eight average Seattle houses now cost $3,296,712. “That all went away in the ’80s through, dare I say, basic mismanagement.”

Still, he thinks his life is a good bargain. “I’ve had more happiness than I think anyone deserves.” He often talks with Van Sant about the tradeoffs they’ve made: “Gus tells me, ‘You can do things I can’t do, and I can do things you can’t do.’

“I’ve won over thirty film festivals, and blah blah blah,” he says. “Film festivals and I over the years have discovered we don’t love each other. I still love vodka, but the bottom line is, vodka and I are no longer friends. It’s just like that with film festivals. But none of that really makes much difference. It’s really the quality of your life — that’s the stuff.”

As Charles Bukowski used to say, “It’s all flash and shadow.” Krogstad still has the flash, and casts a shadow.