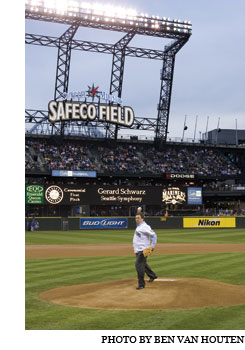 In Safeco Field’s luxury boxes and bleachers, early arrivals settle in for the Seattle Mariners’ contest against the Kansas City Royals. In the clubhouse, players are waiting to take the field for a game that means very little this late in the season. And deep in the bowels of the stadium, the conductor of the Seattle Symphony is throwing me curve balls.

Maestro Gerard Schwarz, 62, has been asked to throw out the first pitch of this, the 132nd game of the Mariners’ season. I am playing catcher during his warm-ups. On my hand is Schwarz’s glove. It is a yellow fielder’s mitt made by Franklin Sports, well worn from years of playing catch with Schwarz’s now-grown children but now stiff from recent neglect. “It’s from 1925,” says his wife, Jody, laughing as her husband loosens up in the hallway outside the greenroom. Inside, two singers from Seattle Opera are doing their own warm-ups for “The Star-Spangled Banner.”

The maestro is no rookie. He throws hard, first from thirty feet, then from forty-five feet, and then from the full sixty-six feet stretching from the fake pitcher’s stripe painted on the concrete floor in front of him to the fake home plate painted in front of me. The first full pitch hits the glove with a satisfying pop. He pumps his fist. The second comes in low, ricochets off the concrete floor, strikes my knee and careens towards a door where, with a loud bang, it temporarily halts the national anthem rehearsal. I have been beaned by the maestro. After a few more pitches, he says, “That’s enough,” and I limp into the green room where Schwarz has agreed to hang out with me until he gets the call from upstairs.

While the Mariners have already lost hope of post-season play, the Seattle Symphony is just barely in the preseason of its season, its twenty-fifth with Schwarz at the helm. His is the longest tenure the orchestra has seen, and it is credited with a dramatic growth in the Symphony’s audience base. The maestro’s silver anniversary is the reason for his first-ever major league pitching invitation, but it is not his first encounter with the Mariners, a team he has followed since moving from New York to Seattle in the early ’80s. It is the Mariners who reignited Schwarz’s love of baseball, a part of his life that remained dormant since his beloved Brooklyn Dodgers moved to the West Coast in 1958.

Back in the green room, Schwarz reminisces about his first time at Safeco Field. “We played a concert here in 1999, before the inaugural game,” he says, turning to Jody, sharing the memory. “It was an hourlong concert of Mahler and a few others and we ended it with the national anthem. Bud Selig, the commissioner of baseball, was there. He said that it was the best anthem he ever heard in his life, and he said, ‘I’ve heard a lot of anthems.’ We opened Key Arena too, you know? It wasn’t a ball game that was first played there, it was a symphony.”

Schwarz is not generally nostalgic. Filled with an intense passion for his work and a frenetic energy, he is more apt to look forward to the next season, or the next project, than back on past accomplishments. Still, he has reason to reminisce. Earlier this year he announced that he will step down from his post at the end of the 2010–11 season. He acknowledges that he will still be around, composing and acting as conductor laureate at the symphony. He also acknowledges that he is in the early stages of a long goodbye.

Mariners president Chuck Armstrong pokes his head in the green room. “Maestro!” he shouts, beaming. “Are you warmed up?! Are you warmed up?!” Schwarz leaves the interview to embrace the man he first befriended in the early ’80s when both men were new to the city, Schwarz having moved from New York, Armstrong from Los Angeles. The two men make their way back out to the hallway. Armstrong puts on Schwarz’s glove and starts giving the Maestro pitching advice.

“Always aim a little higher than you think,” Armstrong says to Schwarz, squatting behind the fake home plate. The maestro pitches. Smack! “That’s it,” Armstrong booms. “We should add you to the roster.”

They head to the field, where Schwarz is introduced by announcer Tom Hutyler as “one of the most influential conductors of our time.” The maestro takes the mound wearing an oversized Mariners jersey bearing his last name and the number one over his conservative khaki slacks and blue fitted shirt. He winds up and throws another curveball to the catcher. Smack! Right in the mitt. He shakes the catcher’s hand and walks back, smiling and gracious, to his hosts.

Upstairs, before retiring to the president’s box, Schwarz takes a moment to consider his career.

“For me, it goes in two progressions,” Schwarz says. “It is, how lucky I am to have done what I’ve done, but it’s also how lucky I’ve been to be allowed to do it. If you don’t have the opportunity, you can’t do it. It’s like being a ballplayer. If you have a great ballplayer on a lousy team, it’s very hard to make the impact you can if you are on a great team.” 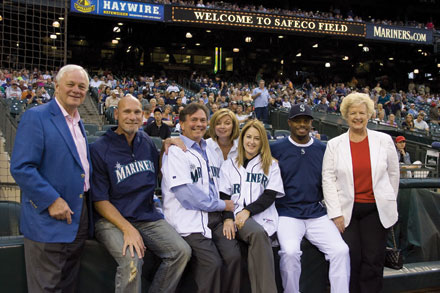 This month, Gerard Schwarz will lead the Seattle Symphony through performances of Mendelssohn’s Violin Concerto in E minor, Mahler’s Fifth Symphony and Dvorak’s Symphony No. 8, as well as the score to Alfred Hitchcock’s Psycho. Visit seattlesymphony.org for a complete schedule.