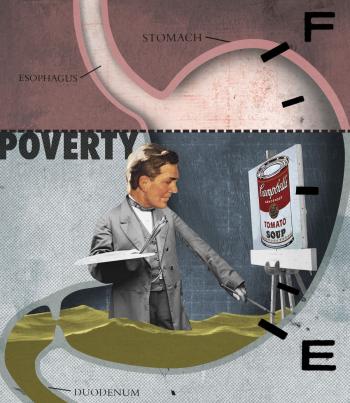 Professional artists are the last hired and first fired — and twice as likely as non-artists to be unemployed, according to the National Endowment for the Arts. “The artist unemployment rate grew to 6 percent in the fourth quarter of 2008,” says an NEA study, “compared with 3 percent for all professionals.” That’s a merciless 63 percent gain from the same quarter in 2007.

One was filmmaker/painter Sarah Jane Lapp. She had taken nine months off paid employment to complete a decade-long animation project, Chronicles of a Professional Eulogist, which premiered at the South by Southwest Festival in Austin. She was excruciatingly aware of how unpropitious it was to release the film in the valley of the recession. Says Lapp, “This is not even funny,” though Lapp herself is.

So are the ways of fate. Last December, in a moment of desperation, Lapp “applied for every frigging job on Craigslist.” How did it feel when she couldn’t even land a job as a dishwasher in a Queen Anne nursing home? “Humiliating!” But then Harvard hired her to teach animation next winter.

You can never tell where you’ll land in a tornado economy. In Seattle, 52.8 percent of artists earned less from their art than last year, but 10.4 percent actually did better, and 26.7 percent made the same. Even since the October crash, 5 percent have seen improved fortunes, and 8.3 percent remain eerily unscathed, like avant-garde cellist Lori Goldston, who’s played with David Byrne, Nirvana and Cat Power and makes her living mostly from teaching in her Ballard studio at about forty dollars a lesson. “Music lessons are one of the last things to go out of somebody’s budget,” she observes. “People cut big fancy vacations, but not music lessons.”

Other teachers who have not, like Goldston, played on albums with over ten million sales, find they are losing students. And even non-losers are running scared. Performance artist Amy O’Neal of the company Locust teaches at Seattle Theatre Group’s Young Choreographers Program and at Velocity Dance Center, which lost its home when the Oddfellows Building was sold. “That is how I make a big chunk of my income and how I survive and how I’m able to live my life as an artist — by having those classes that I’ve built up for over eight years,” she says. Fortunately, Velocity will move into a new home at the old Capitol Hill Arts Center in September. But, says O’Neal, “That ambiguity was really, really scary for a while.”

Chris Crites, whose arresting Depression-era acrylic portraits on brown paper bags made the cover of The Stranger’s “Economic Survival Guide” issue and show at galleries around the country, says his sales are down and few shows are lined up. Galleries aren’t calling as before and collectors who inquire through his Web site “just don’t write back.” He doesn’t expect business to improve soon. As with 52 percent of those surveyed, his morale is down. In the Artist Trust survey results, artists report cutting back on health care, studio space, food and sleep; 38 percent can’t afford proper art supplies.

According to 59 percent, what they need now are small artists’ grants — harder to get now that everyone’s applying. Artists are spurning juried shows and those that require travel expenses, and, like painter Juan Alonso, they’re seeking more public art commissions than ever before. Alonso is represented by Seattle’s blue-chip Francine Seders Gallery, but lately he’s opened his own studio in Pioneer Square to host First Thursdays and reaches out more aggressively to the public on his new blog. But at the same time that he’s marketing himself, he’s not ready to compromise his vision. “If I’m going to do art with all its difficulties, I’m going to do what’s really true to myself.”

Mostly, artists are sticking together. At the nadir of her economic woes last fall, Lapp heard a woman preach about tithing. “I did an emotional 180,” she recalls. Giving is empowering. She keeps a spreadsheet of the 10 percent of her income she pays forward. Last Yuletide she sent her friends in need handmade cards announcing the “Lappy Happy Hour” with five dollars stuffed inside.

“I have many, many friends,” she says. “I don’t think anybody’s gonna let anybody starve.” •

Artist Trust is a resouce for local artists in need of funding and support. Learn more about everything they have to offer on their Web site.