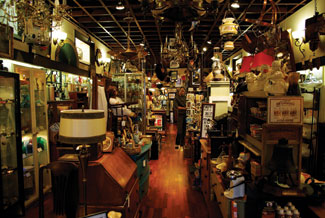 An antique store built in honor of a beloved woman with fabulous taste. Yes, they even have fox furs.

Yet Emma Jean’s is named after a woman whose own past is being erased by Alzheimer’s. Owner Thomas Grant, a tall, thin, graceful man of forty-nine, started the shop after his mother’s 2004 diagnosis. When friends called, saying, “Something is wrong. She lost her car,” Grant brought Emma Jean from Tacoma to Seattle and found her a room in a group home whose caretakers really care. Her sudden frailty shifted the gears in his life.

“I was active in theatre,” he says, “but I had to put that all on hold when she got sick.” The store seemed like a good way to pay the bills — better than theatre, at least. 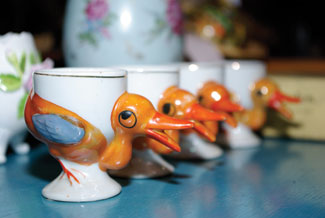 Many of the items Grant sold in the shop’s first years came from his mother’s treasure trove, assembled with fabulous taste. “She was of the hoarding generation,” he explains. Wasn’t it sad to sell his mother’s things? “There are some I can’t sell, too sentimental. When I do sell her things, I often tell the person, so they know there is a history.”

After more than four years, the shop now also sells consignment items and antiques: discoveries from estate sales, other people’s histories. Each object echoes Emma Jean’s elegant tendencies: a blue glass perfume sprayer, a pair of feathery high-heeled mules. At press time, Emma Jean had been transferred to hospice care; she was on her way out of the world. As she transitioned, the shop became her son’s way to hold her close and let her go at the same time.