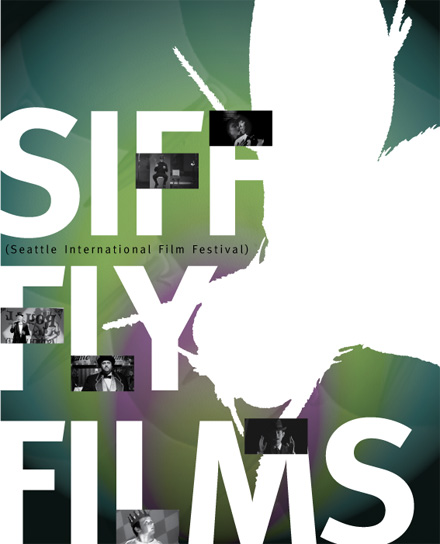 While most of the films in the Seattle International Film Fest were years in the making, four were made in a matter of days. A look inside SIFF’s Fly Filmmaking Competition, where a film is made on the fly, and where the operating belief is: great things can happen overnight.

His armor gleaming and clattering, King Arthur strides through the sinister fog that creeps between the pews of West Seattle’s First Lutheran Church, its tendrils reaching for the stained-glass saints overhead. He thinks this is his castle.

And it is, in a way, because I’m watching Jean Cronin make her new movie, Arthur, one of four insta-flicks commissioned by the Seattle International Film Festival’s SIFF 2009 Fly Filmmaking Challenge.

God made the earth in six days; SIFF gives the four Fly Film directors eleven days to shoot, edit and finish each movie. Arthur’s script, written by Joshua Bourland, won the SIFF Great American Short Screenplay Competition. Now Cronin is shooting it with a crew of twenty-five. Unlike most indie flicks, it’s guaranteed a screening (at SIFF May 21 to June 14), and probably to a sellout crowd. Past Fly Film directors have gone on to glory: Lynn Shelton (Humpday) won prizes at both the Sundance and the Slamdance film fests. It’s been six years since she screened her work at Fly Films, and now she’s on the verge of becoming an indie-film power player.

“We have four days to shoot, and five rolls of film,” says Cronin. “It’s film on the fly, flying by the seat of your pants, a fly in the ointment.” Like all of this year’s Fly Films, Arthur falls into the genre of film noir. It’s about an eight-year-old boy who fantasizes about being the king and tries to save his family from a thug named Bob.

SIFF’s quadruple-Emmy-winning producer Virginia Bogert settled on noir as this year’s theme, and that’s fine by Cronin, a worshipper of Double Indemnity, The Maltese Falcon and Sunset Boulevard. Fly directors each drew a winning noir script from a hat, then raced to make it a real film on old-fashioned celluloid, since noir and video do not mix.

The other 2009 Fly Film noirs are Bao Tran’s Black Coffee, about sex and blackmail, and Shawn Telford’s Safe Passage, about a nightmare ride on the Monorail. Pirates of the Caribbean veteran Shannon Hart-Reed is making a fourth film, Anatomy of a Fly, documenting the Fly Filmmaking process from behind the scenes. 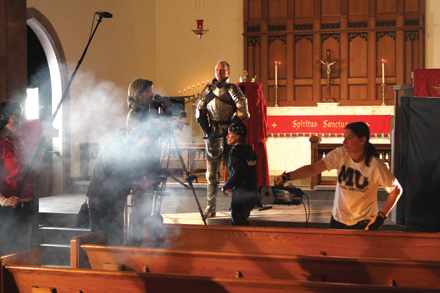 “The whole idea of Fly Film is to create a lab space, a safe space for filmmakers to hone their craft,” says SIFF director Carl Spence. Speed is of the essence. “I’m not naming any names, but last year a filmmaker who would’ve taken a year to make something was forced to make it in a week.”

Up until now, Cronin has never taken less than a year to finish a film; one of her six shorts took three years, so Arthur was a new and welcome challenge. It’s also a nice career launchpad, and not just for her. Actor Paul Reese says, “This is my first featured role. I play a little boy thinking he’s King Arthur.”

In his other life Reese is one of the Seattle Knights, a troupe of medieval wizards who specialize in hand-to-hand combat, seen in stunt scenes in films and TV. “We just did our first stage show as the SK Players at the Jewel Box.” Reese highly recommends the theatre-like concentration of the Fly Films process. “This has gone more smoothly than projects I’ve worked on for a couple years.”

Reese looks forward to slaying the Beast, whose scary look is taking shape in the church basement below his shiny feet. “I’m gonna sneak up on him. Very difficult to do when your armor clanks.”

“We’re gonna have a little blood,” says Sherril Johnson, who’s responsible for stunts and effects. “I’m working on the prop where the blood is going to be coming out, in the knife wound area. We’ll give it a little low-lying smoke they’re walking through, so it gives a little eerie feeling when the lights hit it.”

Johnson sees Fly Films as part of a larger effort to grow the local community. “We love Seattle, but we work outside Seattle because it’s a bit lacking in film. We really need to work on bringing the film industry here.” Fly Films isn’t just a one-shot opportunity — it’s a process that brings film workers together and provides an ongoing networking nexus.

Off in an alcove, Jennifer Popochock paints the Beast’s long claws black. “He’s getting a scar all down his face with stitches in it, some moles with hair coming out, some boils and all sorts of hair in places that you don’t want hair.” She savors the fact that, unlike most indie films, this one is commissioned, wanted. “It’s definitely a mood-enhancer. Like, everyone’s excited ’cause they know it will succeed.” 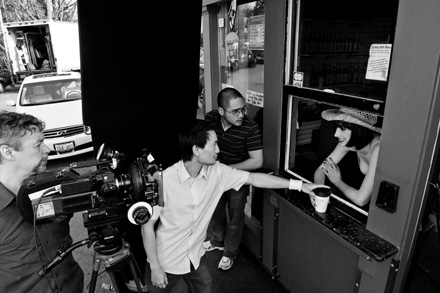 Behind the scenes of Black Coffee: Director Bao Tran rehearses a scene with actress Nina Carduner.

Nevertheless, if you want to make a film on the fly, you’ve got to be flexible. “I thought I was playing Bob,” says Daniel Wood, a rising fringe-theatre actor whose performance in the title role of Theater Schmeater’s American Pilot won raves. “They sent me this shot list, and I said, ‘I don’t really know why I’m in these scenes.’ They said, ‘Well, you’re playing the Beast Arthur slays, too.’”

Wood hasn’t even seen his hairy Beast outfit yet, but he’s ready to step (or stomp) into the role. “Time can be an enemy. Actors can get too theoretical, too involved with theme. I have a tendency to overanalyze my work.” But not when he’s making a Fly Film. “For each scene we may do a half hour’s work in rehearsal. It takes away a lot of the fears, because you don’t have time to think so much.”

There is a bit of time reserved for editing — five days, one more than is allotted for filming — plus two days of post-production. “Editing is a crucial part of shaping a film,” says Spence, citing the famous duo of Martin Scorsese and his editor Thelma Schoonmaker.

SIFF Fly Films are monuments to the city: each director is required to work in one Seattle landmark, chosen from an approved list. “The challenge is to mix that into the plot so it isn’t obvious,” says Cronin. And each movie is a monument to the director, too. “The director has to make a Hitchcockian appearance somewhere in the film.” In an age of quickie cell-phone cinema and faceless multiplex blockbusters, SIFF Fly Films strike a blow for auteurs, local talent and movies like they used to make them. “There’s nothing quite like it,” says Cronin. Then she turns to carry out a bloody hit on a hairy, evil Beast. •