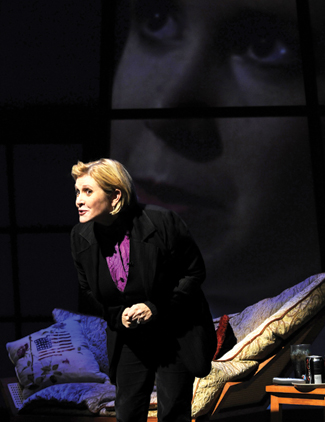 Talking with Carrie Fisher as she prepares for her one-woman show at the Rep.

Carrie Fisher (above), who performs her memoir-monologue Wishful Drinking at Seattle Rep from April 2 to May 3, has a gift for describing the ways she has screwed up her life. “I tend to narrate a life I’m reluctant to live,” she told me when I visited her LA home — once owned by Bette Davis and Edith Head. Carrie has added a backyard Buddha statue with Howdy Doody’s face, sitting beatifically beneath a crystal chandelier.

She took the acting advice George Lucas repeatedly gave her when she played Princess Leia in Star Wars — “Faster and more intense!” — and applied it to her life. “My way of protecting myself against it was to verbalize it somehow, to put it into wacky, askew prose. Mike Nichols says it’s a twitch that some of us are lucky enough to be able to turn into a talent — if it’s an amusing twitch.”

Nora Ephron told me Carrie was, “without any question, the funniest person I know. If I were Carrie, I would just tape-record everything I said and sell it.” At last, after decades of coy roman-à-clef novels, Fisher has taken Ephron’s advice and spills the real beans in Wishful Drinking. It’s a good thing she wrote down her memories, because life-saving electroshock therapy has erased some of them.

Here’s a quick refresher: Carrie grew up fast — Michael O’Donoghue called her “the Hollywood Devil Baby.” In the Brad Pitt–Jennifer Aniston–Angelina Jolie scandal of its day, her dad, Eddie Fisher, dumped Carrie’s mom, Debbie Reynolds, for Elizabeth Taylor. “Elizabeth Taylor was my stepmother, but it was nothing personal,” Carrie said. In 2001, Carrie wrote a TV movie about their love triangle, These Old Broads, starring Debbie and Liz. Carrie plans to see Debbie in Seattle. “My mom’s coming up to do a show, and we’re gonna celebrate her birthday.”

At nineteen, Carrie became Princess Leia. Soon she was in the fast lane, stealing Paul Simon from a heartbroken Gilda Radner after spurning a proposal from Gilda’s ex, Dan Aykroyd.

Not until Wishful Drinking has she dared to write about her eight years with Simon, who’s not as nice as his hit songs (the ones on Hearts and Bones skewer Carrie). “This is the thing Paul does,” she said. “He’ll disagree, split hairs, so it’s always like — not an argument, more like a debate club.” She thinks he’s like other power males in her life: Richard Dreyfuss, Harrison Ford, David Geffen, David Mamet. “They have this expert energy. It’s not that you disagreed with them, you just didn’t agree with them in the right way.”

Her addiction alienated Simon. “The Blues Brothers was the beginning of my being bad, an epic in its most abyss-like form. Belushi told me I was just like him. Then he dropped dead. I got into drugs for pain reduction and mind expansion, but I wound up with pain expansion and mind reduction.”

She found what looked like happiness with Bryan Lourd, an agent tougher than Ari on Entourage. But after they had a baby, Lourd dumped her for a man. Carrie exacerbated her manic-depressive illness with occasional drug relapses, then milked them with books and screenplays. “Good anecdote, bad reality,” she told me. After her first quasi-memoir, Postcards from the Edge, made forty million dollars, she sold her second one, loosely based on her years with Paul Simon, for one million.

Carrie’s bottom line: “If you look up ‘romance’ in the OED,” Carrie told me, “the second definition is ‘not founded in reality.’”

Carrie’s art, on the page and onstage, is very much founded in reality. I’m not sure which wild stories she’s going to tell at the Rep. Maybe she’ll recount how George Lucas taped her breasts flat to her chest so they would stop jiggling under her white robes in Star Wars because “there are no boobs in space.”

“It’s a performance piece,” she explains, “so I shape it according to how the audience reacts. It’s just sort of different anecdotes from my life. We’re working on a deal to go to Broadway, not till next spring. They don’t want to pay anybody too much, and it’s got to be worth schlepping out there.”

But Carrie’s act is not strictly for laughs, or tears, or money. George Lucas clarified it for me: “I’m glad she’s found something that gives her control over her destiny.”