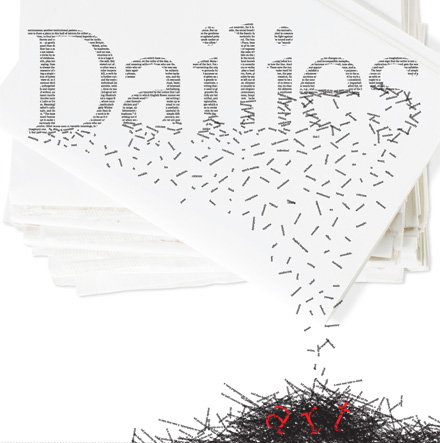 Newspaper culture critics are an endangered species. What does this mean for Seattle artists?

Sheila Farr chooses her words carefully when she describes the day her job disappeared. She makes a practice of being careful with language, and this is a story she wants to get right. “Here is how it was put to me,” she says, scrupulously recreating her conversation with Seattle Times higher-ups. “They were eliminating my position as art critic. The position would be gone.” A fine-boned woman with a meticulous manner, fifty-seven-year-old Farr was the paper’s staff art critic for eight years, and a dominant voice in the city’s visual arts scene for over twenty. She is a very good art critic and she knows it. So the news she’d likely be the last staff art critic in the Times’s 112-year history was a surprise.

“They told me I could stay on at the paper and write some previews for Ticket and work as a general assignment reporter,” she says, “or I could request a voluntary layoff.” “General assignment reporter” could be code for a really bad gig – chasing “breaking news” on slow-to-no-news days, writing celebrity puff pieces generating a lot of hits online.

She took the layoff option (as did Patrick MacDonald, Seattle’s best-known rock critic since he was eighteen in the ’60s). Her last day of work was December 12.

Gossip erupted in the local art scene: there goes another one. Local newspapers have lost critics with over two centuries’ worth of collective experience in recent years; the Times alone lost art, classical and pop critics in 2008. Farr’s departure was especially regretted. She was an original voice, distant and passionate. “Sheila is a poet,” says painter Tori Ellison. “She’s got an eye, not just an opinion, a gift for putting visual experience into language. For the best critics, it’s a calling, not a power trip – they’re trying to discover what they think. Sheila does. She unearths things that people wouldn’t have seen or noticed.”

In her final weeks, Farr continued reviewing; it was important to her to get as many shows down for the record as she could. On November 21 she introduced readers to painter Grant Barnhart’s show Remember Me When. Farr painstakingly describes his feverish talent: “Barnhart’s addled brand of neo-Americana is built on order, chaos, dark omens and a touch of humor. . . . The imagery turns from innocence to a nightmarish medley of brutality and glitz, testosterone, bare midriffs and vicious girl fights.”

In the review, you can almost see the work – you want to see it, perhaps even to drive across town to see it, the way people come out to see a rare star when it appears in the night sky.

Yet like a telescope snatched from an astronomer at the moment of discovery, Farr’s Times gig was obliterated. Remember Me When is news because a critic noticed it. When the critics are no longer there to discover art, who will call attention to it?

Newspapers went into recession years before the country did, losing classified ads to Craigslist and losing readers to free online content. The Times and the Post-Intelligencer were coaxing employees into early retirement back when 401(k) meant safety net. Now, with no safety net in sight, people are placing bets on which Seattle daily will die first.

As the meltdown continues, certain values become clear: the most basic of these is that breaking news is more important than anything else. This breaking-news panic is a product of Blogosphere Fear – terror that the blogs will get the story before the newspaper gets it. And since most newsrooms operate under the unexamined, cultlike belief that sports coverage must be preserved, arts coverage is what’s targeted for elimination. The logic goes something like this: How many people go to all these little plays anyway? How does someone looking at paintings translate into web hits, dollars, an economic stimulus? Yet as Farr pointed out in her Times farewell essay, U.S. museumgoers outnumber sporting-events audiences by more than six to one (850 million vs. 140 million).

So when Joe Adcock, P-I theatre critic for twenty-six years, retired last summer, the paper did not replace him. In corporate-speak, his position was left “dark.” In the theatre community, some were glad he was gone: his reviews were cryptic and sometimes unforgiving. Nevertheless, Adcock went to everything. He went to plays happening in living rooms, at Intiman, in malls on the Eastside. After he’d been gone for a while, theatre groups began to realize: Maybe our play won’t get reviewed at all. Maybe no one will ever hear of it, and it will pass unnoticed.

By pushing out distinguished writers whom readers trust, the dailies are sinking themselves, warns the great chronicler of the media crisis, New York Times columnist David Carr. “Having missed the implications of the Web and allowed both their content and their audience to be scraped away by aggregators and ad networks,” writes Carr, “newspapers are now working furiously to maintain audience, build new ad models and renovate presentation. But they won’t stay relevant to readers with generic content ginned up by newbies with no background in the communities they serve.”

The “newbies” Carr refers to are of two tribes: (a) low-paid staffers too young to have costly families on the health plan, or (b) freelancers with no health plan and little stature. Brave souls who work for cheap, hustle a dozen pitches at once and only get paid on publication, freelancers are awash in work as unemployment soars – and they’re still broke.

Seattle native and LA Times staff rock critic Ann Powers describes the freelancer’s plight this way. “A [freelance] critic is never able to be comfortable that they own a space in the dialogue, that they will have a true place in the community conversation.” If staff critics like Farr and Powers feel compelled to articulate the cultural history of their cities, the freelancer’s survival instinct compels him or her to secure the next paycheck before embarking on any history lessons.

At the time of our interview Powers had just seen three of her close friends axed from their writing jobs, and she was having nightmares about getting the axe herself. On December 8 the Tribune Company, which owns the LA Times, filed for Chapter 11 bankruptcy protection. Like David Carr, Powers has been trying to articulate why the business strategy taken by so many dailies is wrong-headed, resulting in a doomed parade of goodbye parties for people who should not be leaving. After much contemplation she settled on the metaphor of hamburgers:

“Just to take it out of the professional realm for a moment, think of it in terms of hamburgers. Would you trust someone’s opinion about a hamburger joint if you did not know what kind of food they liked or if they even ate hamburgers? Or would you go to a trusted friend who you knew ate hamburgers all the time?”

Critics come to know the town just as reporters get to know their beats: they find their sources, their deep throats. As Tori Ellison phrased it, they learn how to “unearth” truths about the scene – digging into the underground instead of running over its surfaces.

Some say: forget the daily papers, the really great arts criticism is happening on blogs. I have searched and searched Planet Blogosphere and have yet to find this to be true. Of course blogs, twitter, myspace, all of it is in some sense revolutionary (Obama’s win proved this). But the blogosphere is not a place that produces great, careful writing. Perhaps this is because bloggers don’t generally craft and revise their work: it’s all about back-and-forth discussion, diary entries, lists.

“A staff critic is by nature a generalist,” says Powers. “Their job is to cover as wide a range as possible. The blog world does not encourage generalists it encourages specific passions.” It also encourages?xenophobia – fear of those who are unlike you. “Who do we have in common?” asks the social networking site. The staff critic binds society together, if only by giving everyone someone to disagree with. The new, unknown critic splits audiences into interest groups. The critic starves on $125 a review; artists and audiences, starved of comprehensive coverage, drift into separate, solipsistic twilights.

Looking into her future, Farr thinks about big book projects she wants to write (she is the author of three books already: James Martin: Art Rustler at the Rivoli, Fay Jones and Leo Kenney, a Retrospective: Celebrating the Mysteries) . She battles dark money worries; sometimes it’s a losing battle. She regrets leaving the Times at such a historic moment – it is widely documented that in eras of economic insecurity and depression, people turn to the arts in greater numbers. In such times we seek escape and news of future stars. Nevertheless, she looks forward to attending First Thursday art parties now that she is no longer The Critic from the Times. She looks forward to chatting with painters without the hovering anxiety of being On Assignment.

On November 20 the Times published an editorial about the Wallace awards: seven million dollars given to local arts groups by New York-based philanthropists. The Times editorial, entitled “Applause Goes to Wallace Foundation,” gushed about this glorious windfall and declared Seattle was once again being seen as a city where “rich cultural and artistic offerings help attract the best and brightest to work here.” The fact that the Times published this piece of fluff at the very moment their best and brightest culture critics watched their jobs go dark, portending a long cold winter for the arts, seems to be a remarkable example of bad taste. But then again, in the dumbed-down world of daily newspapers, taste is an overrated virtue that never quite pays off.? •