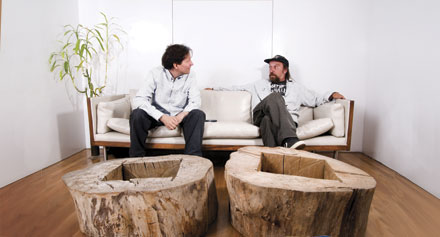 At the Ace: Tim Appelo (left) and Larry Reid. Photo by Grant Ellis.

A walk through a neighborhood that’s gone upscale uncovers the ghosts of arts eras past.

You climb twenty-three steps to stay at Belltown’s Ace Hotel. But it used to be about one step up from sleeping in the street. At different times in olden days it was a halfway house, a Christian mission, a flophouse and a brothel. “It doesn’t feel like a hotel,” says former Belltown resident Steve Fisk. “More like a haunted house.”

The Ace looks futuristic. Renovated astoundingly in 1999, its décor is white as George Lucas’s THX 1138, with huge, arty photomurals of gorgeous Northwest scenery. Once a crash pad for transients and thieves, the Ace is a steal for cool cravers of comfort: rooms start at $99.

“This was a wild neighborhood,” says Larry Reid, who worked in his dad’s Belltown garage in 1961, ran the local gallery CoCA in the ’80s and designed the retro sailor’s bar look of the Lava Lounge in the ’90s. “Mostly SRO hotels, rooms with a hotplate. But there were artists here even then.”

Gentrification happened: “My dad’s garage was condo-ized; now my daughter’s doctor is over there.”

Starting at the Ace, Reid takes me on a tour through Belltown’s old art haunts. “Louie Raffloer’s blacksmith shop [Black Dog Forge] used to be a film vault.” Hollywood sent movies bound for Northwest cities to the Belltown vaults for storage and distribution. The celluloid was prone to burst into flames, like an artist after one drink too many, so the vaults had to be secure.

“Buena Vista, Paramount and MGM had offices here and screening rooms, like the Jewelbox Theater,” Reid recalls. “Really well appointed in the day. They wanted to impress the distributors.” Reid first saw Mary Poppins with his dad at a Belltown screening room.

Walking down the block, we approach the ’90s. “Pearl Jam used to rehearse in Louie’s basement,” he says. “Nirvana headlined a big show at CoCA. I gave ’em $250. They didn’t know what to do with it. Kurt was kind of . . . not homeless, but he was a bit of a waif. A throwaway kid. What I liked about him was, he wouldn’t just show up at the door like every other punk rocker and pester you to death. He used to come, like, an hour early and say, ‘Can I do anything?’”

Reid cites a now-vanished building near the Ace: SCUD, the Subterranean Cooperative of Urban Dreamers. (“It’s a magical place,” said R. Crumb when it faced demolition. “Like a tree house of artists.”)

“We were on borrowed time,” says ex-SCUD resident Fisk, who paid maybe $150 rent for a space to live and work in. Fisk’s former neighbor Ashleigh Talbot calls SCUD “the true heart of Belltown,” immortalized in her fantastically elaborate Web archive, madametalbot.com/pix/scud/scud2.htm.

Though you might have stepped aside to avoid scary-looking SCUD kids back then (especially when they set off explosions in their parking lot to protest the new condos going up), Fisk notes that some of their mad dreams came true. SCUD spawned artists Talbot, Art Chantry, Katherine Wolf and Arthur Aubry. Fisk himself recorded Nirvana’s early masterpiece “Been a Son” and co-scored the brilliant film Kurt Cobain: About a Son with Death Cab for Cutie’s Ben Gibbard.

“I’m a little too nostalgic,” admits Reid. “You can’t stop progress.” But neither can you stop remembering old subterranean culture heroes. When Polyester premiered in Seattle, he recalls, “They dropped John Waters off at my doorstep. I took him to Tugs, a Belltown gay bar. Within a half hour, every weirdo in Seattle was parading through, sort of auditioning for him. I didn’t know what I was in for. I crawled out of the bar on my hands and knees about 8 a.m. I guess he closed the place down.”

He muses a moment. “It’s all changed so much.”

Fisk finds it funny how Belltown has been so gentrified. He laughs, pointing to the condo that went up across the street from where SCUD used to be. “It’s supposed to be where Frasier lives on TV,” he says. “But if you look out his window, it’s a view west from Queen Anne Hill.”

Steve Fisk doesn’t mind so much being driven out of Belltown, to Ballard. “I’m a homeowner now,” he boasts. “Thank you, urban renewal!”