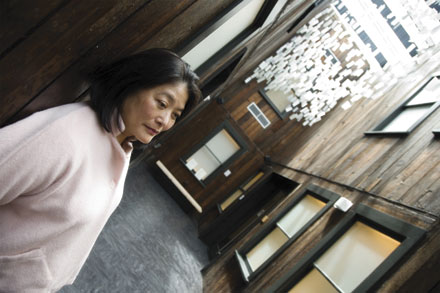 How Do You Get a Mayor’s Arts Award? Have a Vision. And Practice.

Mayor Greg Nickels’s favorite painter is Jacob Lawrence. Mozart is his favorite composer, though Tales of Hoffmann is the opera he loves most; it was his daughter Carey’s first opera and he shared her excitement that evening. If you ask him, Defending Your Life and It’s a Wonderful Life are the best movies ever made. Excellent picks, all. As, to be sure, are the local artists and organizations selected to receive the 2008 Mayor’s Arts Awards. This year the Seattle Arts Commission reviewed more than two hundred nominations from the public and recommended six to Mayor Nickels. The selections comprise a snapshot of Seattle culture at this moment; they cast a spotlight on creators who are a strong bet to prove of historic importance. It’s fitting that the city’s chief executive honors stellar achievements in Seattle’s creative community: art knits tight the fabric of society. This year’s recipients define and prove Mayor Nickels’s favorite saying: Anything you put your mind to, you can accomplish.

Wing Luke was the Northwest’s first Asian American elected to public office; he served on the Seattle City Council from 1962 to his death in 1965. It’s fitting that Luke, who had a hand in saving Pike Place Market, today lends his name to an Asian American museum that’s transformed a crumbling International District landmark built by Asian Seattleites into a giant gem of historic preservation.

“A lot of people thought the only thing in here was pigeons,” says Beth Takekawa, the Wing Luke Asian Museum executive director who took over when longtime director Ron Chew retired last year. “The pigeons on Canton Alley still buzz the windows of the Gary Locke Library on the top floor of the museum. They still think it’s home and what are we doing here?”

What the museum is doing is transforming a neighborhood and galvanizing a community. The glorious sixty-thousand-square-foot building brilliantly manages both to preserve a sense of history (including a replica of the Yick Fung Company, a Chinese store that opened in 1910) and to bring the architecture into the new century.

Relying on community input rather than a curatorial staff, the museum also gives a new voice to disparate local Asian communities, from Hawaiian to Sikh. Last year Chew asked, “Are we a history museum? An art museum? A genealogical center? We’re a mixture.” Cleverly incorporating contemporary art and historic spaces, the Wing Luke Asian Museum, an affiliate of the Smithsonian Institution, brings the past to life. 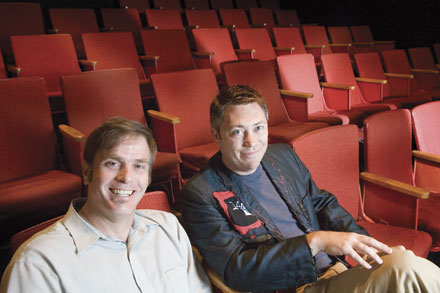 If any arts event in Seattle was unlikely to last, it was Michael Neff and Jodi-Paul Wooster’s 14/48 theatre marathon. The event was first presented in 1997, featuring plays written, designed, rehearsed and performed within two days. But “the world’s quickest theater festival” would not die. “It’s not a one-off,” says Wooster (above, right). “More like a forty-off. We’re in our eleventh year, two weekends every six months.”

The event, which has now created over five hundred plays, was born in dire times. “Companies were closing, budgets crunching, animosity growing between theatre groups fighting for money and audiences. So we invited everyone to work together. And it started a burgeoning community — just a billion relationships. Many people get work from 14/48.”

What’s 14/48’s secret? “It’s very anti-theatre,” says Wooster. “It doesn’t have the things I hate about theatre. Auditioning? Miserable! Rehearsal takes so long. It’s a living art and that gets squeezed out of it. Go with gut instinct!” At 14/48, ideas for play themes are put into a hat at 8 p.m. on Thursday. Writers create a ten-minute script overnight.

Directors each draw a play and cast members from the hat and start rehearsing Friday morning; so do musicians who’ve never worked together before. At 8 p.m, you get seven world premieres.

Wooster claims he’s really glad he gets to draw up his festival’s list of invited participants; there are no auditions. “If I hadn’t created 14/48,” he says, “I probably wouldn’t be invited.” 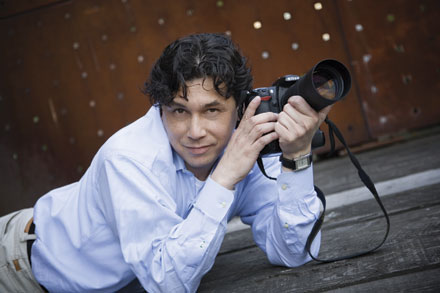 Though he’s first and foremost an artist, Hugo Ludeña is also a human bridge, joining Latino people to the mainstream and with each other and helping immigrant artists gain entrée to the fine-arts community.

Born in Lima, Peru, he came to America at eighteen and to the Northwest in 1993, where he’s compiled an unequalled photographic record of the local community. “I chose Hugo for the reason I often choose artists,” says Greg Kucera, whose blue-chip gallery represents Ludeña. “Audacity.” Ludeña’s eye celebrates weddings, quinceañeras and folk events unsentimentally and with the energy of the moment captured intact.

Ludeña also mentors youth by teaching photography in the South Park PhotoVoice Project. “I’ve been shooting in the community for fifteen years, so they know my face,” he explains. He teaches the kids to see their world and imagine a better one. “They photograph things they want to change in their community: graffiti, old housing, drugs on the street.”

He publishes Latino Culture Magazine to spotlight other talents and works tirelessly to connect Latinos to the larger art market. “There’s a lot of frustration for immigrant artists,” he says. “They come from good fine-arts schools in their home countries. Now they’re working in a restaurant, going to art fairs. The process of getting into a gallery here is difficult.” Ludeña alerts the art world to the artists’ existence and the unseen wonders they can contribute. “They say, ‘OK, Hugo’s there, so we’re all gonna get there pretty soon.’” 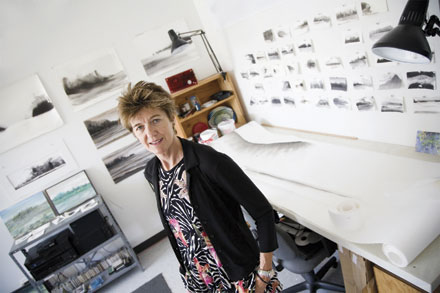 Cathryn Vandenbrink learned from firsthand experience about the difficulties artists have finding affordable space in which to live and work. “I was living in a loft in Pioneer Square and became aware of how fast buildings were changing,” she recalls. Rents skyrocketed and artists fled. “We once had over five hundred artists’ studios in Pioneer Square,” she says. “We lost about eight buildings in two or three years.”

Vandenbrink figured out how to help reverse the seemingly irreversible exodus of artists out of the city. She’s devoted
the past dozen years to advocating for affordable artists’ spaces, and along the way she learned how to tap into the complex machinery of municipal government. “It was all
new to me, but everywhere you look, people want to help — the Office of Housing, Department of Neighborhoods, people in Planning and Development and in Transportation. They saw how important it was to the health of the city and
said, ‘Let’s do it.’”

Artspace, the leading nonprofit real-estate developer in the nation, saw the opportunity in Seattle to play a part in coherent civic planning. They made Vandenbrink the regional director of Artspace Projects. “Artspace had the real-estate expertise and I had the relationship to the city,” she explains. 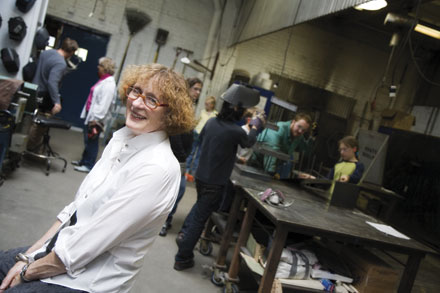 Marybeth Satterlee spent seventeen years teaching fifth and sixth graders. Then she spent some years at home, raising a child. An acquaintance proposed that she lead an after-school program. Soon, six kids were meeting at her home for a physiology class. That’s how it started.

In 1986, Satterlee and Greg Ewert, a fellow teacher, began adding workshops — dozens of them, on filmmaking, tree house building, glassblowing, welding, pastrymaking, cartooning and more. Since it was founded more than ten thousand kids have participated in what they called Coyote Central. It’s now a richly conceived three-ring circus comprising hands-on workshops under the Studio Coyote umbrella; Hit the Streets, a public art project for low-income youth; and City Works, collaborations with local businesses that commission Coyote-trained artists to make public art.

“The model is: find talented professionals to lead the workshops, get access to work spaces and teach kids how to be activity oriented, problem solving and creative,” says Satterlee.

Kids in our passive, TV-sedated culture respond positively and dramatically to the chance to do something real and under their own control, Satterlee reports: “It’s their tree house, their cartoon, their flan.” Coyote kids aged ten to fifteen have made soapbox derby cars, learned magic, staged a mock trial at King County Courthouse, sung gospel and studied animation and rocket science, among other fun subjects. They’ve built major public artworks in collaboration with professional artists. And no child is ever left behind at Coyote: a scholarship program enables every interested youngster to participate. 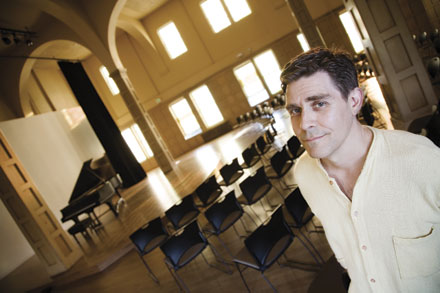 The Chapel is a stunningly lovely space with fine acoustics. It’s become a nurturing home to way-out-there performers, an epochal new-music epicenter. “We provide a congenial space for many artists to present challenging work and make it possible for them to take creative risks without having to worry too much about money,” says Peters. “For most of this music, forty people is a big audience. We believe that artists should not be punished for that. In fact, they should be encouraged to experiment. Here they can stretch out and try things that they might not have done otherwise.”

It’s a salubrious brew of musical influences. “Gathering together all these individual avant-garde sub-genres — modern classical, improvisation, fringe jazz, electronic and computer music — in one high-profile venue increases visibility for all of them and makes connections between them,” says Peters. The city benefits, too. “We help keep the margins from getting erased and give cutting-edge artists one more reason to stay here. And keeping creative, visionary people around makes Seattle a more interesting, exciting place to be. For everyone.”