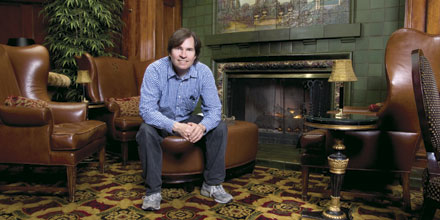 Our intrepid reporter settles into the Fireside Room on First Hill to talk movies with a visiting father-and-son act.

A 1908 monument to Seattle’s gold rush prosperity, the palm-tree-fringed Sorrento Hotel still looks deluxe and de-lovely despite hospitals that now dwarf its seven-story elegance and the skyscrapers that block some of its once-vast view of Elliott Bay.

Currently up for official landmark status, it feels like history, and it’s hosted history-making guests, Guggenheims and Vanderbilts back when, David Bowie and Eric Clapton more recently.

My favorite part of the hotel is the first floor: the Fireside Room, the Hunt Club restaurant and the bar. “It is an elegant bar with flawless Manhattans,” says my pal, Seattle powerhouse attorney Kate Pflaumer. “Just lounging here allows me to imagine I have something clever and literate to say.”

Exactly! When Pflaumer and I attend a group of culturati that sometimes meets at the Sorrento, we feel like the Algonquin Wits of New York in the ’20s. “It’s the wood that does it,” maintains another group member, Lesley Hazleton, author of Jezebel: The Untold Story of the Bible’s Harlot Queen. “There’s something about all the burnished Honduran mahogany paneling that’s a perfect match for a glass of Laphroaig and a smile of contentment at a good week’s work done.”

The hotel attracts talent, particularly authors on tour. I recently met up there with David Gilmour, whose irresistible memoir, The Film Club, tells about the winter his high school son was flunking out. Gilmour felt as if he himself was flunking out of life: he’d lost his job hosting a Canadian TV chat show and wondered if anybody would hire a fifty-something literary type ever again.

He let his son Jesse drop out of school and stay home with Dad on one condition: the kid had to watch three movies a week and talk about what they meant. The book is like David Sheff’s Beautiful Boy: A Father’s Journey through His Son’s Addiction, the hit memoir (as featured at Starbucks!), only in this case the addiction was cinema and Dad was definitely an enabler.

When Jesse started correcting David on cinematographer credits, they had arrived together in movie heaven. In the end, the father-and-son film course turned both guys’ lives right around.

David, Jesse and I sat at a tiny, roundish table, accessorized by bulbous goblets of nice wine, and matched wits about the films that would’ve been on pay-per-view if the hotel had it. “Juno is the worst movie I’ve ever seen!” growled Jesse. “So glib it’s embarrassing.”

“Utterly unconvincing,” agreed David. “An older actress pretending to be young. In acting school, there were two rules: never appear onstage with an animal, because the audience won’t pay any attention to you. And never try to play anyone younger.”

No Country for Old Men was, well, no movie for Jesse’s old man. David hates the Coen brothers. “They’re making it for their hip friends. ‘We’re hip, bleak and fearless — we’re gonna kill these characters, ’cause that’s part of the joke!’ Do you really need to be told there are evil people in the world?”

“No, no, no, absolutely,” said Jesse, seeming to concur and disagree simultaneously. He insisted the visual style, pacing and acting overcome the hip nihilism. He even likes the notoriously inconclusive ending: “Tommy Lee Jones’s dream about seeing his father is quite profound.”

As for the famous aesthetic duel between the film’s director Tony Scott and writer Quentin Tarantino (who was bitter that Scott turned his mass murder into a happy ending), David Gilmour sides with the director. “It didn’t have enough truth in it to justify a tragic ending. It’s a comic book.”

The Fireside Room waitress came by with a revisionist aesthetic announcement of her own. “I switched your wine from the one I recommended,” said the waitress. “I tasted it, and suddenly it was like I was dancing with some lady wearing too much cheap perfume. You are having the cabernet instead.”

The Gilmours had just seen the new Indiana Jones film and wished the director had our waitress’s good taste. “Stop trying to create child-culture cartoons!” David ordered Spielberg. “Grow up! I mean, Harrison Ford is my age. When you spend two years on a project, you don’t get those years back.”

David and I started swapping movie star stories. “Harvey Keitel has got a brain like a hot dog,” said David, “but he’s an idiot savant — such a graceful, sensitive actor.”

“He subscribes to Marine magazine,” I said. “I spotted it on his coffee table.”

“Whenever I ask people who’s the best actor,” said David, “they say Brando. But Dennis Hopper said James Dean, his Rebel Without a Cause costar.”

The Gilmours agreed that Seattle seemed a marvelous place. “But,” said David with a diplomatic pause, “is the weather always . . . like this?” Seattle was colder than Siberia this year. Yet we do have some cultural heat that radiates way past the city limits. “My favorite radio station is here,” said David. “KUOW. I always listen to my favorite show, The Swing Years and Beyond.”

Just as KUOW is streamed worldwide, perhaps back in Canada, where pay-per-view is as ubiquitous as moose, the memory of the Fireside Room will warm the Gilmours.
Make mine Laphroaig. I’m glad I can go there anytime.