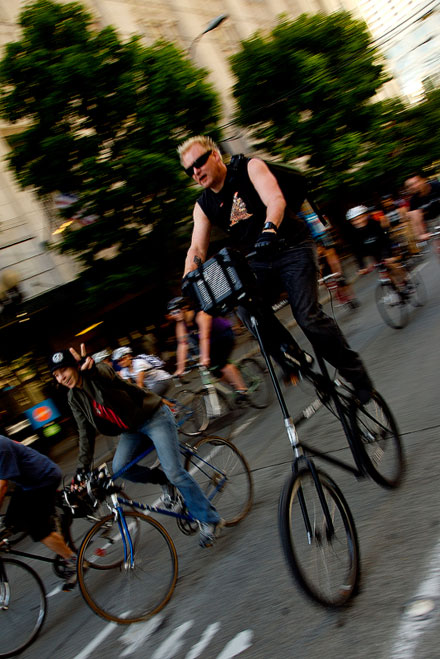 Get on your bike and join up with hundreds of merry pranksters. Take over the town. Never mind where you’re going. It’s summer in Seattle and the fun just doesn’t get much larger than this.

The great body of riders find in the bicycle a new pleasure in life,
a means for seeing more of the world, a source of better health
through open-air exercise, a bond of comradeship.
– “The Reign of the Bicycle,” 1894

There are numerous scientific studies prescribing exercise as a cure for depression (and all sorts of less heady ailments), but the best reason to put yourself on two wheels is that it will make you happy. Biking puts you in a good mood. And if a simple solo bike ride can make it seem as if all’s right with the world, how about a tour with, say, three hundred friends and strangers, on a Friday afternoon, when y’all take over the road — in a way, even the city — yourselves?

Sun helps, of course, but Critical Mass — there is such aggregation of cyclists for you to join and that’s what it’s called — is a blast even if there’s grey overhead. Damn the weather: this monthly ride is where you enter the complex and multifaceted bike scene, non-competitive and barely athletic division, that’s thriving in Seattle.

Critical Mass takes place on the last Friday of the month. You start downtown at Westlake Center around 5:30 p.m. From a distance, the crowd on bikes can be a bit intimidating. Who are these people willing to face off against Seattle’s ugly Friday rush-hour traffic?

From three-thousand-dollar-titanium-racing-cycle riders to punk kids on fixed-gear bikes (a.k.a. fixies), Critical Mass draws a diverse group. You might encounter a woman who otherwise mounts her road bike on a sunny day for a twenty-minute jaunt. And her dad, who usually enjoys a little two-wheel speed through the Arboretum on a Sunday.

There will be goofy customized vehicles, perhaps three pink Malibu Barbie bikes, stacked one atop the other and rigged to be ridden by a cyclist more than six feet off the ground. BMXers on their miniature bikes will do tricks in the middle of the street, spinning and popping wheelies, then pedaling madly to keep up.

There’s a huge contingent of riders here who bike simply because it’s cheap transport. “Fixies overlap with bike messengers,” Nate Boxer, a seasoned Critical Mass rider, tells me. “And then there are always hippies, in dreadlocks and sparkle.” There’s also a discernible punkster/hipster/DIY aesthetic, where what’s important seems to be the fact (and satisfaction) of getting around under your own power. “It’s not the counterculture excursion it used to be,” says Boxer, “probably because of the price of gas.”

The best way to check out the scene is to show up and join the crush. Don’t expect to be going anywhere at 5:30; it’s not that kind of excursion. A rider who participates often explained to me: “There are no organizers.” I didn’t quite understand what he meant until recently when I rode my first Critical Mass. It took the throng five circuits around Westlake Plaza to get the bikes into the street and going. No one was leading, unless you happened to be in the front of the pack. Then you were.

Critical Mass originated in San Francisco in 1992, with a sixty-odd-person ride, and has ballooned into a worldwide phenomenon. In cities from New York to Stockholm to Seoul to Seattle, bicyclists take to the roads in groups ranging in size from small posses to battalions numbering in the thousands.

What purports to be “the most complete directory of critical mass rides worldwide” is online at critical-mass.info. Here you’ll learn that the name for this social network on wheels derives from Return of the Scorcher, Ted White’s 1992 documentary on bicycling. “Critical mass” is what happens in China, where there are too many bikes, too many cars and no traffic signals. Individual cyclists wait to cross the congested road. More and more gather until, with sufficient magnitude, all the bikes spill into the road, compelling car traffic to stop.

If you click around on the many Web sites supporting what’s referred to as “CM,” you’ll see that each site is careful to declare itself not an official site. There isn’t one. It’s an enormously sprawling organism, Critical Mass, anarchy on wheels, as you will witness in the charming messiness of the ride.

My inaugural ride started the way CM does every month, circling, as if the assembled riders were trying to get up their collective energy — or find the guts to go out and play in traffic. But traffic was polite and supportive. Surprisingly perhaps, drivers looked happy to see us. We were a band of hundreds of freewheeling bikers, shouting and waving to pedestrians and drivers: a strange urban tourist attraction, some sort of cheerfully irresponsible, self-celebrating parade. So much smiling and bell ringing at passersby in staid, keep-to-yourself Seattle! We were having a good time and it was contagious.

This ride is not, as some people think, a protest. That’s not the intention. There’s an edge of rebelliousness to Critical Mass, sure: you experience a certain powerful glee with the ability to stop traffic. But the pleasure has as much to do with the rare experience of riding in the company of so many fellow bicyclists. Yes, there’s an illicit thrill in sailing straight through a red light, when one of your fellow bikers has corked traffic, blocking cars at an intersection so that the massive stream of bikes can flood through.

Critical Mass is about pleasure more than about making any sort of political statement. There are cyclists in the group who have given up their cars (or never owned one), for whom this mode of transport is an everyday political fact. This event, however, is meant to be a celebration, a gentle, if intimidating, assertion of cyclists’ right of way on the roads.

It was more fun, by far, to ride in the middle of the mass, with bikes as far as I could see, in front and behind. The sheer quantity of bikes makes the rules. Bikes take up all lanes, filling the road, curb to curb. With the force of this crowd, all it takes is a single bicyclist to stop traffic at a cross street. We don’t need no stinkin’ green lights. Remarked a fellow cyclist: “We don’t create traffic, we are traffic.” 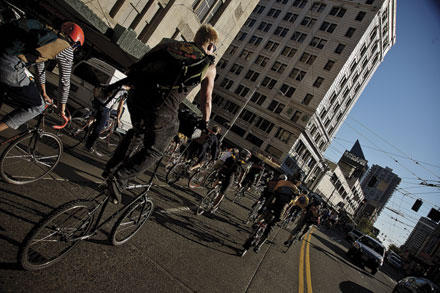 This is when the car people get impatient. One angry SUV driver bumped a bike and many cyclists came to rally around the insulted rider. They simply let their presence be known. The nine-miles-per-gallon guy rethought his strategy and the rest of the two-wheeling crowd rushed by. “Don’t stop! Don’t stop!” came the calls. We didn’t stop. The flow of bikes moved on. No one got hurt; the ride continued.

Riding en masse you get to see the city at street level. You’re in a gaggle of boisterous riders. Boom boxes (old-school, eight-D-battery-taking ghetto blasters) are strapped to handlebars and rear racks: it’s a slow-rolling party.

The contentment has to do with solidarity and frolic. At the end of a work week, the whole city is your playground. A flask or two is passed around, everyone’s in a good mood, the flume of bicyclists lazes its way along the street.

This could be the sport of the Slow Movement. Even the spandex-padded-shorts types take their time along this route. It’s more about the journey than about getting there. The there, in fact, is by no means a foregone conclusion. The endpoint of the CM ride is not predetermined. The next turn — right or left? — is not clear until the intersection happens.

The power in numbers is tangible in these monthly rides. It takes that critical mass to feel all right running the light. When the crowd of riders thins at some intersections, there’s less likely to be a flouting of the traffic laws. I was told that my first CM was an especially polite one. It’s been several years since there were altercations with the police. Not so long ago, Critical Mass headed south on the Alaskan Way Viaduct. It was an annoying snarl for car drivers, but a beautiful ride for the bicyclists. A motorcycle cop dismounted and directed the unusual tangle of traffic.

If you’re stuck driving in downtown Seattle during rush hour some Friday evening, you might curse the horde of bicyclists happily careening in the streets. Or you might, like many of the drivers I passed, smile and honk, thinking, maybe: That could be me.

“It’s basically a ride around town,” Boxer summarizes. “You end up somewhere pretty and open a beer. Sure, it’s chaotic. But three hundred bikes is just a really great feeling.”