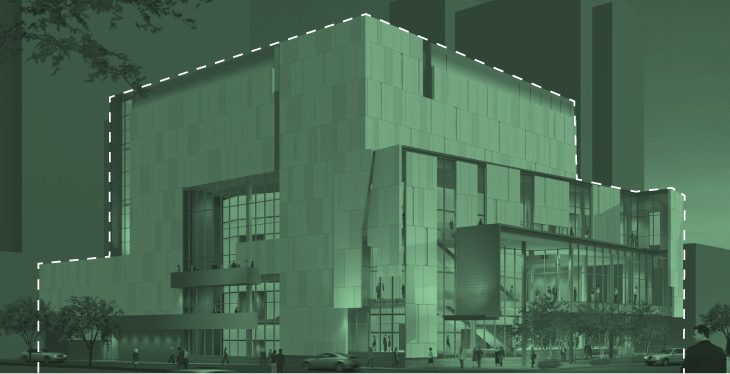 After all the buzz from A $25 million Eastside arts center grant, a $100 million question remains.

The space formerly known as PACE (Performing Arts Center Eastside) is now the Tateuchi Center, thanks to a $25 million grant from the Atsuhiko and Ina Goodwin Tateuchi Foundation. “After what has seemed like an endless loop of cutback stories, it’s a much-needed booster shot to the arts and culture scene of Bellevue,” says Yoko Ott, director of Bellevue’s Open Satellite.

“It’s just a huge adrenaline rush,” says Stephen Elliott, manager of the Theatre at Meydenbauer. “Maybe it turns a few heads and opens a few checkbooks.”

The grant by Atsuhiko’s widow, Ina Tateuchi – who lives just down the street from the PACE site – had better open quite a few checkbooks. Even when the grant is added to the $35 million already donated by the center’s board, Kemper Freeman, Bill & Melinda Gates Foundation, Microsoft, the City of Bellevue and many others, the campaign remains $100 million shy of the cash needed to build. But the Tateuchi Center is not just a construction project; it is a 135,000 square-foot, LEED Gold–certified symbol of the Eastside’s desire to be a destination of its own, one that doesn’t have to commute to Seattle to get its big shows.

“Big” is key. Pacific Northwest Ballet, which calls Seattle’s McCaw Hall home, is looking forward to performing on the Eastside. Tateuchi organizers suggest the Seattle Symphony may be interested too. Eastside arts organizations, however, are conspicuously absent from fundraising events or planning initiatives.

“What we have on the Eastside.” adds Elliott, “is a lot of organizations where four hundred seats is all they serve.”

But Bellevue Arts Commision chair Betina Finley feels the size of the Theatre at Meydenbauer is what’s holding groups back. “You need so much space – you have nothing like what Tateuchi will offer on the Eastside.” And the Tateuchi design is flexible, with a 2,000-seat theatre that can be lit so that a five-hundred-person crowd isn’t dwarfed. There’s also a 250-seat cabaret, designed to attract nightlife and the younger generation.

Also cool: $3 million of the Tateuchi donation will fund “Japanese and Japanese-inspired performances.” Board member Alka Badshah says the Indian Community Eastside (ICE) has already raised half of the million dollars it has pledged for programs there. In 2008, Bellevue, Washington’s fifth-largest city, had the state’s highest percentage of foreign-born residents. Many are happy that their influence is on the rise.

Building the Tateuchi Center is already the biggest arts campaign in Eastside history. But if another $100 million doesn’t get raised in time to for construction to begin in 2011, the center will be a big fat embarrassment instead – and will bolster the cynical argument that Eastsiders care more about high-end shopping than high art.

If I were on Tateuchi’s board, I’d gather my neighbors around me – those that have already built Eastside audiences – and show that there is such a thing as Eastside art right now, and it’s worthy of a home. •