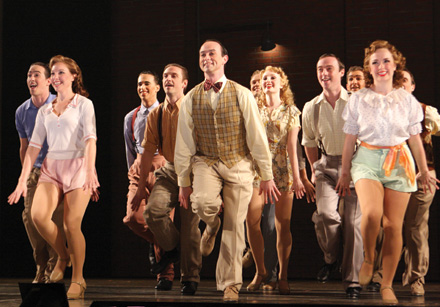 City Arts barely caught up with Village Theatre executive director and frequent flier Robb Hunt as he was racing to Sea-Tac for yet another whirlwind trip to New York, where VT regularly exports big-name musicals and basks annually in Tony Awards glory. VT’s most recent export is Stunt Girl, a 2005 Issaquah world premiere given a staged reading last month at the prestigious Manhattan Theatre Club, which could be a springboard to Broadway and to future Tonys.

But another exported show is closer to home, and of more practical importance. On July 3, the ambitious, tapdance-tastic, thirtieth-anniversary-season-finale musical 42nd Street goes dark in Issaquah and shuffles off to Everett Performing Arts Center to run from July 9 until August 1.

“Bringing our mainstage productions to Everett is a unique model that certainly allows us to increase production values and serve many more subscribers and patrons than if we were just in Issaquah,” says Robb. “Everett has allowed us to continue to grow in sets, costumes, lights and props without the level of contributed income that many of the Seattle major organizations enjoy.” And the two theatres are almost precisely the same size, making for a relatively painless transition.

“Roughly one third of Village Theatre’s audience attends at the Everett theatre,” says communications director Michelle Sanders. “The other two-thirds attend in Issaquah.”

In fact, you could argue that New York owes a chunk of its Tony-worthy entertainment to Everett’s support of Issaquah. “We are able to contribute a portion of this added income to our new-works programming,” explains Robb, “which has allowed us to develop new musicals such as Million Dollar Quartet – currently on Broadway and nominated for three Tony Awards.” •