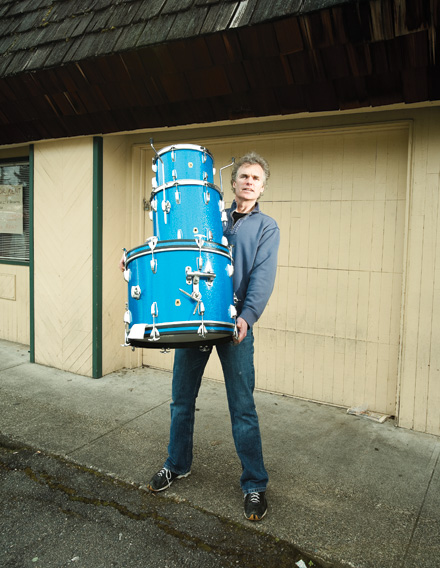 Donn Bennett’s Drum Studio in Bellevue is churning out young beatsmiths while giving the veterans a place to hang their sticks.

Bennett holds a stack from his vintage collection. Photography by Andrew Waits for City Arts.

The Donn Bennett Drum Studio is an unassuming store. It’s tucked away on a side service street in an industrial and storage complex, and its small sign, obstructed by a barred window, is the only indication of this incredible store, drum school and musical hub that serves the Eastside as well as the entire music industry.

Though the studio may not make much of itself from the outside, its owner doesn’t mince words when it comes to his shop: “No one in the world has a shop like this,” he says, taking a break from his work on a recent afternoon. 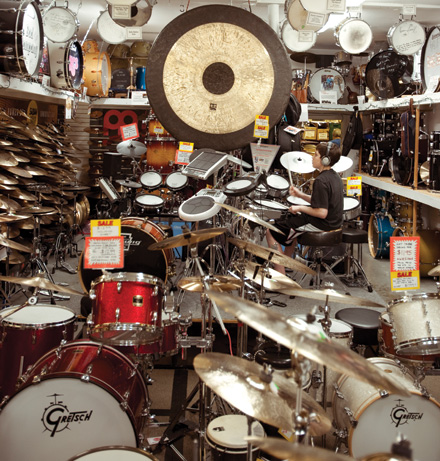 A massive gong dominates the shop amongst hundreds of pieces of equipment.

Bennett doesn’t lie. The store is packed floor to ceiling with everything a person could ever want for a drum kit, whether for a tiny garage band or for a massive touring super-group. The store’s center revolves around a thirty-five-thousand-dollar gong suspended from the ceiling that is a few feet shy of hitting the floor.

Bennett has been teaching drummers of all levels in the Puget Sound for more than twenty years. His shop grew out of his teaching studio in Seattle, and after it moved to its current location it slowly evolved into a drum store supplemented by Bennett’s ample collection of vintage sets. Those drums have attracted both record producers and some of the world’s most famous drummers.

Bennett sells the latest models, but his specialty is vintage products.

Set above the packed floor is a collection of kits given to Bennett by some of his famous customers, including Ringo Starr, Hal Blaine and Bun E. Carlos. Signed snare heads fill in the ceilings and the wall, with a melted drum set that Green Day’s Tre Cool once set on fire during a performance rounding out the collection.

“At first I wanted to collect all these rare sets, but now, I’d rather have someone playing a [vintage or signed] set, rather than have it sitting in storage,” he says, declining to pinpoint a set he would never sell. “They’re meant to be played.” 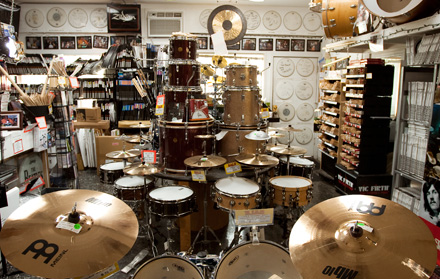 While Bennett may get a lot of attention when the rich and famous drop by, the shop’s greatest impact on the community comes from its role as a school that employs ten teachers. Bennett has built a huge musical network through his school, he says, adding that Woodstick, the massive drumming event he has hosted in the Puget Sound every fall for the last eight years, is where that network comes to life.

As Bennett gets back to work, Alan White, drummer for British rock giant Yes and now an Eastside resident who teaches at Bennett’s school, stops in. He wants Bennett to join him in making a phone call to a drummer who is undergoing surgery. The man is thinking about giving up drums because of an illness. Bennett and White want to make sure he keeps at it. 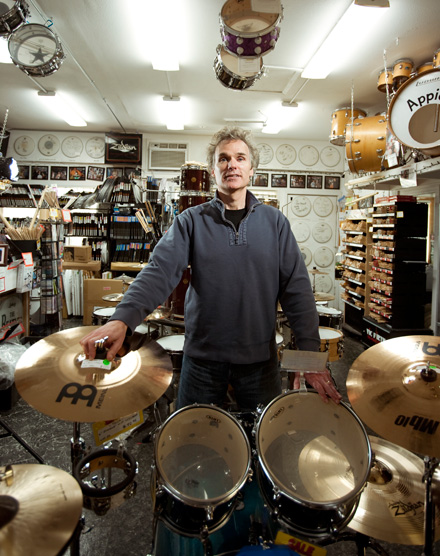 Bennett’s signed collection is impressive, but the drumming community is his pride.