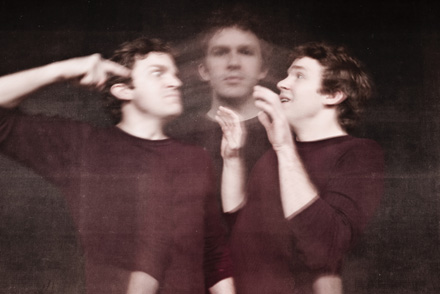 Back in the Northwest after a stint as a rapping basketball fan in Los Angeles, the player takes on two roles at once in The Gypsy King at the Village Theatre.

You’ve just finished playing the title role in Seattle Children’s Theatre’s production of Peter Pan. What was the most difficult part about playing the child-man?
You know, flying, in the harness, toward the beginning of the run was a little uncomfortable, and I realized why it would be a little bit easier to be a woman in that harness than a man. But at this point it’s just really fun.

How is it playing for an audience of five hundred children?
The lack of censorship with that audience is phenomenal, because they’ll just shout at you constantly. I love that. It makes me feel like I am in Shakespearean times when there was a crazy mob out there. Sometimes it was a battle to keep a smile from creeping across my face. One time, when Captain Hook poisons my medicine and I’m sleeping in a rocking chair, there was a kid who kept talking to me, really nicely. He kept saying, “Peter. Peeeter. Your friends are in danger, Peter. Wake up, Peter. Here comes Captain Hook. Here he comes.”

Sports fans might recognize you as a character named Paul Brogan who raps about sports in a series of viral videos. How did that happen?
You know Paul Brogan. [Laughs.] Well, we did one of those videos and then MySpace called us and wanted us to create more exclusive Paul Brogan episodes for them. It was a tough time to be with MySpace, though, because they kind of lost their identity in the Internet world, and as they went down, so did the money for hiring exclusive video content. It was an awkward time, but we had to cash in. Paul is still alive. He actually just made an appearance on an NBA TV show a couple weeks ago. And there might be something during the NBA All-Star game this year.

In the upcoming production of The Gypsy King at Village Theatre, you are playing two characters who sometimes share the stage. Have you ever done anything like this before?
I’ve done Shakespeare plays where I play different characters. But the difference is that you exit and then you change clothes and then you come back on. I have never done or seen a show based on the gimmick where I change characters onstage. We have a body double in the production, so my two characters can do scenes together.

Did you get to pick your body double?
I did not. If they had let me, I definitely would have demanded somebody really buff and really handsome. •