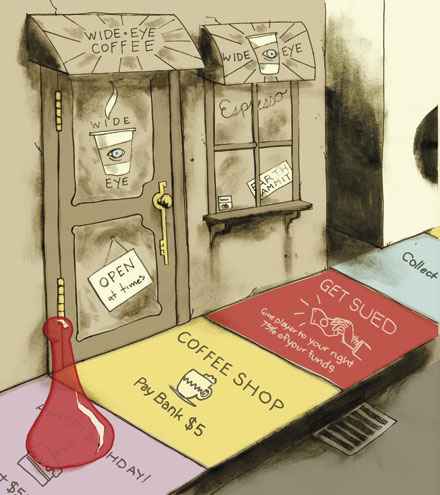 Pour yourself a cup of coffee. Stories of a couple of civil suits may leave you needing a jump-start.

I’m pretty sure God invented the coffee house to help the freelance writer in two important ways: First, it gets me out of my house (and pajamas), away from the ringing phone, Gummi Bears and reality TV. Second, cafés have the go-get-’em grind, the caffeine rush at the ready to energize the mind (green tea is a lame substitute) and turn writer’s block into a free-flowing frenzy of impossibly lucrative ideas. I’m not afraid to admit it: I work better when I’m jacked up on coffee.

I recently went in search of a cool indie café on the Eastside and wound up at Belvi Coffee and Tea Exchange at 108th Avenue NE and 10th.

Belvi lies in the shadow of massive construction on all sides. I hate to complain, but I grew up in the area, when you could head down Main Street and pick strawberries till your hands bled. I was hoping for maybe an apple tree.

Belvi’s signage is obscured by scaffolding, but once inside, the Italian flair — deep red paint and gilt framed artwork — takes you away from the ceaseless development boom outside.

In 2006, the owner of this café, Penny Stafford, sued Starbucks for antitrust, claiming the java giant was a big, bad monopoly, gobbling up every corner, keeping small coffee shops such as hers from securing leases on prime real estate. “We settled out of court,” Stafford told me, and I can only hope that means the corporate behemoth is funding her kid’s college education.

Just hearing the word “lawsuit” sent me reeling back in time to my own stressful encounter with the legal profession. In 1989, my friend Mike Schiller and I invented a board game that combined interactivity with trivia about nature and ecology. Players had to perform environmentally affirmative activities around the house: turn off the light that didn’t need to be on, write a letter to the president opposing offshore drilling, and so on. Our slogan: “Saving the Planet Has Never Been So Much Fun!”

All we needed was a name. For days on end we drank heavily and tossed out catchy titles. We eventually narrowed it down to two: The Earth Game and Earth Alert. My favorite, Earth, Dammit! didn’t poll well with friends.

We hired a lawyer and paid for a trademark search. Turned out a game from the seventies was called The Earth Game, so we settled on EARTHALERT, The Active Environmental Game, and went to market.

We printed one thousand games (on recycled paper, of course) and assembled them by hand. The game sold out and we donated over $5,000 to environmental causes, keeping a high-minded promise. With the twentieth anniversary of Earth Day on the horizon, we were feeling pretty good about our chances for success. We got a bank loan, and printed ten thousand more games.

Bad news. A summons arrived from the Los Angeles County Superior Court: we were being sued by a small environmental group called Earth Alert! (note the exclamation point) for “Irreparable harm and trade name infringement.” We were instructed to cease and desist all sales forthwith.

Earth Alert! (a recycling club comprised of about twenty members in Reseda, California) felt we were cashing in on their name recognition. The nonprofit had a powerful legal firm representing them pro bono. They wanted all we’d made so far. Our lawyer thought we would be OK; all we had to do was give him all our money.

I drove to LA (I could no longer afford airfare), hoping to make a deal with the recyclers. I offered to put a disclaimer on every box, include a brochure about Earth Alert! (of Reseda!) and hinted that they were high on the list for our next round of charitable donations.

They wouldn’t budge, insisting we cease sales, destroy our inventory and pay them off. I drove home depressed and wanting to club a baby seal.

Long story short, with 8,940 games in my dad’s warehouse and the Christmas selling season upon us, we caved. We changed the name to Earth On Alert, figuring we could squeeze in the preposition without forking out a ton for a total redesign of our logo. Our one demand was that we be allowed to sell all remaining inventory within sixty days.

In a legal maneuver that would make the Enron guys proud, we printed a ton of EARTHALERT games and sold them within the sixty day window. The results: profit to us — finally — and over $20,000 in donations made to deserving eco-groups.

The bitter taste of my old lawsuit did not spoil my cappuccino at Belvi. In fact, I was in the mood for another, but Penny Stafford was shutting down at 3:45, a quarter hour early. There was more work to be done; where to go? Craning my neck around the cranes, I spotted Starbucks on the corner.