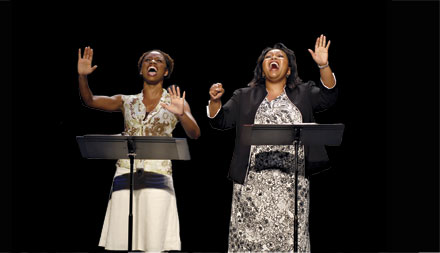 What’s hot right now in American theatre? Musicals. In fact, this might be the best time for musicals since the glory years of the ’40s (Oklahoma!) and early ’50s (My Fair Lady).

TV’s American Idol and Dancing with the Stars are inspiring couch potatoes to take voice and dance lessons, and Disney’s Hannah Montana and High School Musical have tweeners enthralled.

Revivals of classic musicals like South Pacific (directed by Bartlett Sher, artistic director of the Intiman Theatre in Seattle) dominate Broadway. Then there are new avant-garde musicals like Spring Awakening and the off-Broadway sensation Passing Strange.

Here’s something even more unlikely: one of the epicenters of this tuneful seismic activity is the former farming community of Issaquah, now the home of the Village Theatre.

Founded in 1979, the Village has featured new musicals as part of its mandate nearly from the beginning. And since 2001, the theatre has produced its own Festival of New Musicals each August. Executive producer Robb Hunt describes it as “six new musicals in four days with five parties.” Each script is given a single workshop performance in Village’s First Stage Theatre: no set, costume or lights and actors still “on book.” Sound a little dry? Hunt cheerfully notes that the festival plays to capacity almost every night.

Workshops and readings are now standard components of the development process for new plays. But when you’re dealing with a musical, the first airings of a work in front of an audience are particularly crucial. The works are complicated collaborations between lyricists, composers and book writers. Sometimes other authors are involved, too — of original works, novels and films. Even non-fiction works are sometimes the basis for a musical, like Intiman Theatre’s unlikely hit Nickel and Dimed, adapted from Barbara Ehrenreich’s exposé of minimum-wage employment. (Bart Sher sure has an eye for musicals. He also birthed the celebrated show The Light in the Piazza at Intiman and exported it to Broadway.)

What’s more, musicals invariably pick up directors, actors and other theatre artists who travel with a project as it develops. Such complicated collaborations mean that it’s easy to lose sight of just where a musical is in  its evolution until the creative team sees an audience’s reaction. “We get to a point where we look at each other and think: we can’t just keep reading this to each other any more,” says Marty Casella, the book writer of  St. Heaven. The show, featured in last year’s New Musicals Festival, gets a full production this year on Village’s mainstage. “So you need a bigger bunch of people who don’t have any stake in whether it’s going to be good.”

When Casella is watching one of his own plays, he’s not really watching the show. “Usually I’m watching the audience. When they cough, rattle papers, make noise. And when they’re completely quiet, just when you want them to be listening. You only learn that from a workshop or a reading.”

Audiences are vital to musicals, but so are another component drawn to the festival: producers. Musicals, even pocket musicals with a handful of performers (a popular form with regional and midsized theatres), are an expensive proposition. But they can have a big payoff too: megahits like Wicked, Mamma Mia! and The Lion King have pulled box office in the hundreds of millions.

Starting with Beauty and the Beast in 1994, Disney’s been a major player in musicals. This summer Disney rival Dreamworks tries out Shrek, its first foray into musical theatre, at Seattle’s 5th Avenue Theatre.

“Competing on the level of a huge hit like Wicked is daunting,” acknowledges Kevin MacDonald, St. Heaven’s composer. “We’re not a presold property, we don’t have a brand name. Independent versus corporate is a tough row to hoe.”

Fortunately for indie creative teams, there are theatres like the Village, which between the festival, workshops and mainstage premieres has helped launch seventy-five new musicals. Next to Normal, the winner of this year’s Outer Critics Circle award for Outstanding New Score, was featured at the festival in 2002 under the title Feeling Electric.

Hunt endeavors to mix up musical genres, from ethnic to rock-and-roll to traditional Broadway. But Next to Normal is a fine example of the offbeat fare often featured in the festival. It’s a musical about a clinically depressed woman who decides to try electroshock therapy — hardly the stuff of Hello, Dolly!

“Musicals can talk about anything,” asserts Hunt, citing Terezin, the story of Jewish musicians in a Nazi death camp. The show has been workshopped at the Village and gets a co-production with a New York company next year.

Other shows are unapologetically ridiculous, like The Last Starfighter, Village Theatre’s current workshop adaptation of the cheesy ’80s movie. Or Robin Hood: The Legend Continues, a Sherwoodian romp by Tony Award winners Martin Charnin (Annie) and Thomas Meehan (The Producers, Hairspray) that was developed at the Village back in 2004.

Artists like Charnin and Meehan are drawn to the Village because it’s a safe place to nurture new work. “Part of the beauty of developing shows in Issaquah is that it’s pretty far away from The New York Times,” Hunt says with a laugh. The other key to the festival’s success is the active interest of local audiences: “They’re all opinionated and dedicated,” Hunt explains, “because they see themselves as part of the developmental process.”

To grow the festival, Hunt plans to grow the theatre. “The First Stage is a 1913 building with no foundation, so we’re planning on a reconstruction, with new and more flexible seating, a new lobby and new stage — pretty much everything new.”

At least one of the influential artists drawn to the festival is sticking around. Martin Charnin moved to town after his positive experience with Robin Hood and recently collaborated on a new musical with local composer Richard Gray entitled Love Is Love. A musical-theater festival that’s so much fun it causes a Tony winner to relocate? Now that’s a success.