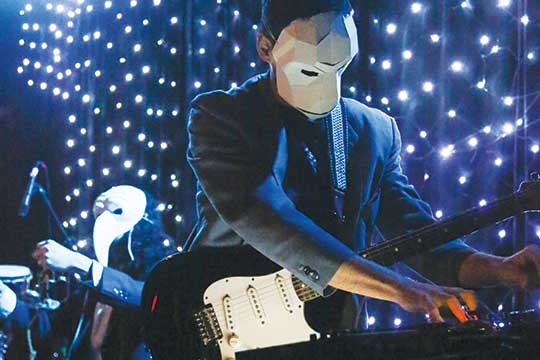 Terror/Cactus at Space Craft on Bainbridge Island in March 2018

Kimberly Trowbridge is best known in Seattle as a painter but her contagious energy and prodigious creativity seemingly permeate every crevice. Tonight, witness her wielding an axe as one third of My Future Self, a rock band whose songs draw on melancholy, dreamy undertones—the same that can be found in her haunting visual work. —Amanda Manitach
Vermillion

This night of lunar-inspired performance, featuring the dancers of Au Collective and a host of QTPOC musicians, promises to be a feast for the senses: New movement rituals in extravagant costumes set to neo-soul music, served along with the culinary stylings of That Brown Girl Cooks, whose black-eyed pea hummus will change your life. —Kaitlin McCarthy
Neptune Theatre

We published an excerpt of Benjamin Benne’s beautiful play Alma (or #nowall) last year, and now you can see it live in this workshop production directed by Brandon J. Simmons. Theatre Battery is building a reputation for creating compelling work in a Kent mall storefront; this swirling, poetic story of Mexican immigrant Alma and her daughter Angel promises more of the same. Runs through Sept. 1. —Gemma Wilson
Theatre Battery

Maceo Parker, saxophonist and funk-soul architect via his collaborations with James Brown, George Clinton and Prince, plays a four-night stand at Jazz Alley to commemorate his new album, and his 75th birthday. He’s still a class act and a talent to be reckoned with. This is a no-brainer. —Tony Kay
Jazz Alley

Four awkward adolescents fielding a terrifying threat against an ’80s backdrop can’t help but draw comparisons to a certain Netflix series. But this indie chiller about pals investigating a cop who may be a serial killer reputedly stakes its own turf early and goes to some batshit-nutty places, so color me intrigued. —Tony Kay
Grand Illusion Cinema

Trying to keep a finger on the pulse of Seattle’s performance community? Reserve yourself a free seat at Intiman Theatre’s fourth-annual Emerging Artists Showcase. These diverse cohorts soak up professional training and development via this program led by Sara Porkalob, and if the past is any indication you can bet you’ll be seeing more of some of these folx in the future. —Gemma Wilson
Cornish Playhouse Alhadeff Studio

Two days of summer heat from the Northwest’s most inventive artists on Seattle’s Pier 58.
Pier 58