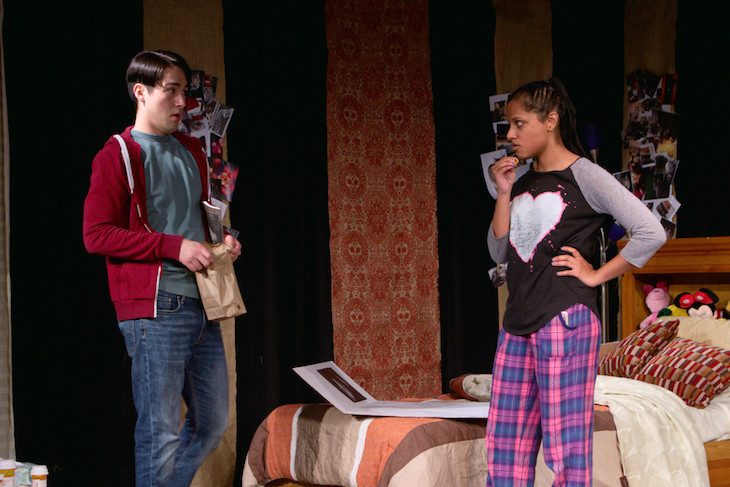 Lauren Gunderson was the country’s most-produced playwright in the 2017–18 theater season, and her deceptively ambitious I and You makes up a good chunk of that number. At first, it’s easy to see why I and You, which premiered in 2013, is so popular: There are only two cast members in one location, and their dialogue pings like firing synapses as a pair of high schoolers moves rapidly from combative strangers to compatriots.

Once the play is over, it’s even easier to understand its appeal. Gunderson’s slice-of-life two-hander bursts open in its final moments, a metaphysical undercurrent suddenly coming to the foreground in a conceit that could easily skew hokey if not for her sheer enthusiasm for its sentimentality. “This is the culmination of everything,” reads one of the play’s last stage directions, bolded and underlined. Gunderson may as well have added 100 exclamation points, and maybe a “mind blown” GIF. Still, in the moment, I bought in to her exultation.

Much of the credit for that, of course, belongs to Josh Kenji and Varsha Raghavan, who star in Pratidhwani and Theater Schmeater’s co-production, directed by Agastya Kohli. The duo’s push-pull dynamic generates enough friction that anything from an irreparable blow-up to true love’s first kiss seems possible.

The play begins with Anthony (Kenji) in Caroline’s (Raghavan) bedroom. She’s screaming for her mom to explain why this boy is here. He’s quoting Walt Whitman. “I and this mystery, here we stand,” he repeats over her protestations. Whitman’s mystical “Song of Myself” is a foundational text in I and You, but first, it’s a laugh line.

Anthony has arrived, woeful poster board in hand, to work on an English project with Caroline, whose serious liver condition keeps her cooped up in her room (Disney plushies on one end; a table of pill bottles on the other in Pallavi Garg and Swati Srivastav’s set). She’s been keeping up with schoolwork, but had no idea about any English project. There was an email, Anthony offers. “Who checks email anymore? There are like 40 cooler ways to communicate,” Caroline retorts, in what is not the only bit of miscalibrated teen-speak.

Eventually, he convinces her to pitch in on the project, and she becomes intrigued by Whitman’s poem and the fluidity of its narrative voice. In accordance with the unwritten rules of young adult literature, the sick girl and the popular boy bond despite their obvious differences. He’s a garrulous basketball player who loves jazz; she’s a shy arty kid with hundreds of photos of her cat on her walls.

Raghavan jumps instantly to a 10 on the rage scale before settling in and bouncing between playful defiance and wounded quiet, a volley that Kenji dutifully follows along with, his demeanor adjusting to suit hers as their two characters grow closer. Conversation follows a similarly circuitous path, veering from the frivolities of high-school minutiae to the ramifications of death—a subject Caroline is reluctantly familiar with. Anthony revels in the spiritual seeking of John Coltrane’s A Love Supreme before Caroline punctures the moment, awkwardly dancing to “Great Balls of Fire.” If these seem like unusual reference points for teenagers, well, these are unusual teenagers on an unusual path.

Pratidhwani and Schmeater’s production synthesizes Gunderson’s surface naturalism and stylized details into a satisfying amalgam. One of Whitman’s most famous lines in “Song of Myself” is “I contain multitudes,” and I and You would like to lay claim to that too. But its go-for-broke finish wouldn’t work without the small details of new friendship ringing true, and they do in this likable staging.

I and You runs through Nov. 3 at Theater Schmeater.