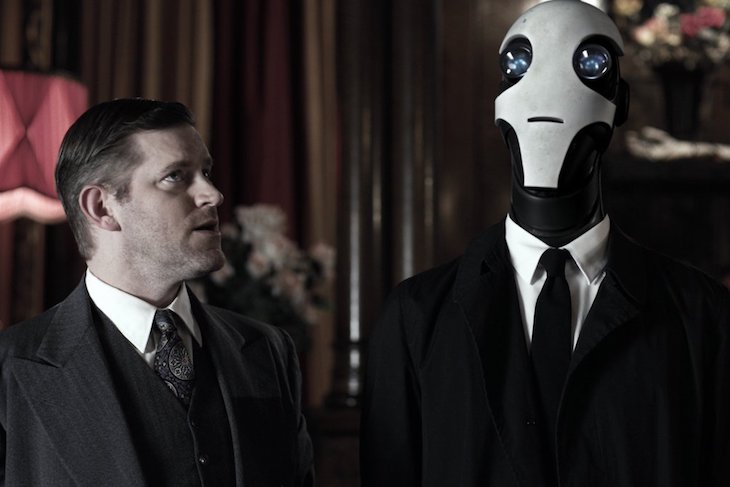 One of the most enjoyable genre movies at the 2017 Seattle International Film Festival wasn’t technically a movie. Writer/director Webster Crowell’s Rocketmen, a web series about forgotten rocket-toting peace officers brought back into service to save the world, played in its entirety on big screens, to packed houses, during the festival last year. The series’ pulp thrills, wry humor and lovingly crafted visual style played with surprising efficacy on a big screen.

This year SIFF rolls out another web series in its entirety for big-screen consumption. And the good news is that Automata, a series helmed by local writer/director Van Alan, is every bit as enjoyable and beautifully handmade as its SIFF predecessor. Alongside Prospect, another strong homegrown science fiction offering at SIFF this year, Automata is further proof that a genuinely fertile genre-film scene is growing in this neck of the woods.

As Rocketmen lovingly acknowledged old cliffhanger serials, Automata acknowledges its own retro influences: the detective novels of Raymond Chandler and Dashiell Hammett, and the film noir movement that began in the 1940s.

The premise is Sam Spade with a steampunk twist. It’s the height of the Prohibition Era circa 1928, only the target of this alternate-universe Prohibition isn’t alcohol. The government’s suspended further production of automatons, sentient androids who are usually consigned to servant status. Human cop-turned-gumshoe Sam Regal (Basil Harris) and his automaton partner Carl Swangee (voiced by veteran character actor Doug Jones of Pan’s Labyrinth and The Shape of Water) make a living as a PI team, digging up dirt on unfaithful spouses. They expose Madeline Avery (Lisa Carswell), the adulterous wife of business magnate Henry Avery (Dan Kremer), and shortly thereafter a Pandora’s Box of murder, betrayal and xenophobic mob violence is opened.

Based on a one-off web comic in Jerry Holkins‘ and Mike Krahulik’s Penny Arcade web-strip series, Automata treads very familiar ground, employing a through line of private-eye pulpiness and noirish grittiness. But Alan and company have created something supremely entertaining within those self-defined genre confines.

There’s dense, truly immersive detail in what’s been crafted here. Vivid period touches abound, and the low-tech but wonderfully effective automatons (played by human actors) fit elegantly into this alternate world of rain-spattered streets and darkened alleyways. In the process, Nacime Khenis’s photography sharply riffs on everything from The Maltese Falcon to Fritz Lang’s Metropolis, and the score by Daniel L. K. Caldwell strikes a firm balance between retro comfort and brooding suspense.

The actors play their stock roles to the hilt. Local actor Harris has been show-stealing wholesale on stage and in front of the camera for years, and with his five o’clock shadow, distinctive jawline and spot-on dialogue delivery, he’s pretty much born to play this part. Jones and physical actor Dylan Smith combine skills to create in Swangee a memorable foil for Regal, and there’s considerable buddy-cop chemistry between man and machine. Kremer gives great misanthropic old rich guy in his supporting role, Jen Taylor turns in some solid work as a possible femme fatale, and character actor Richard Carmen’s superbly gruff and growling detective Tommy Egan coulda stepped straight out of The Maltese Falcon.

The mystery at the center of Automata isn’t exactly groundbreaking (though there’s an interesting twist late in the film), and at just 50 minutes, there’s not enough time to dig into the origins of these sentient robots. But that lack of exposition often works in the series’ favor, creating a refreshing sense of being thrown into the thick of this world with minimal pedantic narrative hand-holding.

A strand of blunt but extremely involving metaphoric semaphore also runs through Automata. The automatons are a marginalized group that triggers xenophobic fears of The Other, and of science, in one fell swoop. The angry xenophobes in this alternate 1920s universe may wear fedoras and trench coats, but they could just as easily be clad in MAGA caps and swastikas.

Automata screens Sunday, June 3 at SIFF Cinema Egyptian and Tuesday, June 5 at Pacific Place. It is also part of SIFF’s Episodic and Webfest, which runs this weekend, June 1–3.