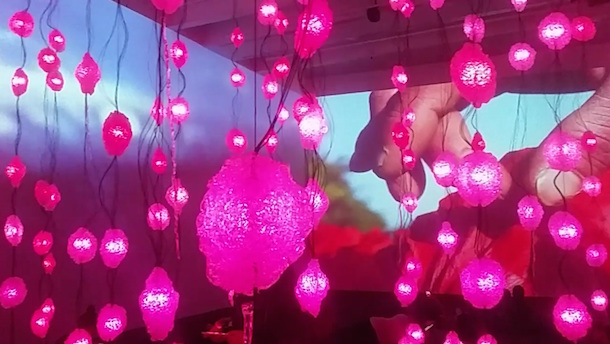 I recently had the pleasure of seeing Pipilotti Rist: Pixel Forest at New York’s New Museum, a retrospective of the artist’s work ranging from 1980s-era single-channel video to today’s environmental dreamlike installations. I enjoyed seeing Rist’s older work firsthand, such as the infamous video Ever Is Over All, which Beyoncé referenced when she danced through the streets smashing cars (and the patriarchy) with a baseball bat. But I fell in love with her fully immersive environments.

Pixel Forest was a room filled with endless pulsing garlands of what looked like holiday lights. It occupied the entire third floor gallery with color, sound and music. An accompanying two-channel video, Sip My Ocean, played larger-than-life across two adjacent walls in the distant corner. The lights were actually handmade plastic bulbs in large, rough-hewn shapes resembling chunks of salt or ice, each containing an LED that slowly changed color, representing a single pixel from the video beyond it. The lights shimmered and alternated in duration and hue depending on what was on the screens. In this way, the interaction between the “forest” and the video seemed to perform a call and response: The video looped and the forest glimmered in a cataract of brilliant flickering color.

As I found my way through these illuminated crystals, I felt a sense of unbridled, magical wonder. On the walls ahead of me, waves swelled and crashed over the camera, intermittently hovering just above and beneath the waterline to reveal sea and sky. The projections depicted hyperchromatic flowers, petals, leaves, a teeming jungle of aquatic plant life and a kaleidoscopic array of mirrored images and bizarre camera-zooms of a pubis holding a small globe. The music pulled me into a trance, like a lullabye formed by a repetitive series of simple guitar notes. During breaks between the music, the room filled with the sweet sound of insects, birds and other animals—evocative of an evening forest.

When was the last time a work of art had induced in me a state of magical being? Maybe when I saw Yayoi Kusama’s installation Fireflies On the Water at the Whitney 2004 Biennial, an installation in which one walks into a dark room encased in infinity mirrors with one inch of water on the floor below and lights suspended above. As with Pixel Forest, the dark, twinkling immersive environment transported me to a place where I stopped examining what I saw from a distance because I was now a part of it, drawn in by its surreal splendor.

Rist’s and Kusama’s installations provoked an emotional experience, jolted out the ordinary, a catalyst to confront our experience as humans among things that are bigger than us.

I’ve felt a similar tenderness in three recent Seattle shows: Hannah Patterson’s exhibition at Interstitial, Wish You Were Her; Brit Ruggirello’s 4Culture show, Blue Hotel; and Sam Vernon’s Rage Wave, also at Interstitial. These artists didn’t employ the same sensory overload in their installations as Pipilotti Rist in Pixel Forest, but they provoked an emotional experience through the substance and authenticity of their dramatizations, which explored gender, post-Internet corporeal existence, exploitation and vulnerability in a gentrifying landscape.

Blue Hotel, Ruggirello conceived a series of still-lifes, with gradient backlighting and kitschy candy-colored objects, such as bright fake flowers, ceramic tigers, glitter-filled lava lamps, metallic mylar fuzzballs and a giant cloud-shaped balloon that slowly deflated over time. She then documented the scene in a print that she framed and inserted into a diorama on the wall. The staged arrangement created a nostalgic dream-state in a hyperfeminine color treatment. The work spoke to the consumptive nature of documentation and possession, and the clash of our physical life with the ephemera of online existence. Ruggirello set up her work with the Internet in mind: Each image a visitor took of the show became a further replica of the scene, adding to the recursive nature of the installation. In this way, the piece was completed when someone took a photo of the space and posted it on social media.

Patterson’s 2015 installation Wish You Were Her revelled in surrealist glitter-infused, abundantly floral and hyperfeminine themes. Like Ruggirello, Patterson often presents a meticulously composed scene made of flowers and plant life, strategically placed lights, steam and, on occasion, live insects and reptiles. In Wish You Were Her, a large video projection of a forest scene dominated the room. Frogs chirped, bugs droned, clouds of mist entered the frame. Occasionally, breaking the suspension of disbelief, an arm reached into the frame to rearrange a tuft of fur, add flowers or otherwise adjust the scene. Lights shifted to suggest a passage of time and the scene turned toward a glittery desert, where elaborately clawed, sparkling hands emerged to dance, contort and undulate as the main characters themselves, responding to a heartbeat-like thumping soundtrack by Crater. Humorous, slightly self-deprecating and otherworldly, these hands are both metaphor and animus—a stand-in for the monstrous feminine and shape-shifting figure.

But beauty isn’t always the point of magical realism. For Rage Wave, New York artist Sam Vernon transformed Interstitial into a desolate abandoned space, buried in a colorful mountain of photocopies. The copies were made from photographs, handwritten lists and other drawings, including audience contributions on subjects like colonization and murders by police. The accumulation of paper strewn across the floor crept up the walls to the ceiling and around the skylights as projections flickered and disappeared. Black paint was splattered across the walls and down the stairs; meanwhile large swaths of colorful spray paint obscured and revealed imagery and handwritten text, like “MAKING SPACE” on a pillar. Rage Wave, with storytelling specific to Georgetown, was like a hyperreal darkened alley or city street plastered with posters for the revolution. This scene felt grim, dirty, exhausted and angry—yet the space was also actively communal, collaboratively narrative, hopeful and potent.

By catalyzing an empathetic emotional experience, environmental installation artists like these give us an opportunity to question the way we consume ideas, bodies, space and imagery. They offer a kind of theatre, engaging multiple senses to jolt us out of our usual analysis and awaken us on a deeper level, where we can connect to perspectives outside of our own.

This focus on human experience and connectivity is precisely what defines work in the tenderness movement. Science fiction offers a distanced perspective from controversial subjects and apocalyptic scenarios, but the femme lens of women creating full-scale and immersive environments closes that distance by asking us to literally step inside. Our experience of feeling is guided by surreal splendor, abundance and accumulation, to take us out of what we know and into knowing each other better.