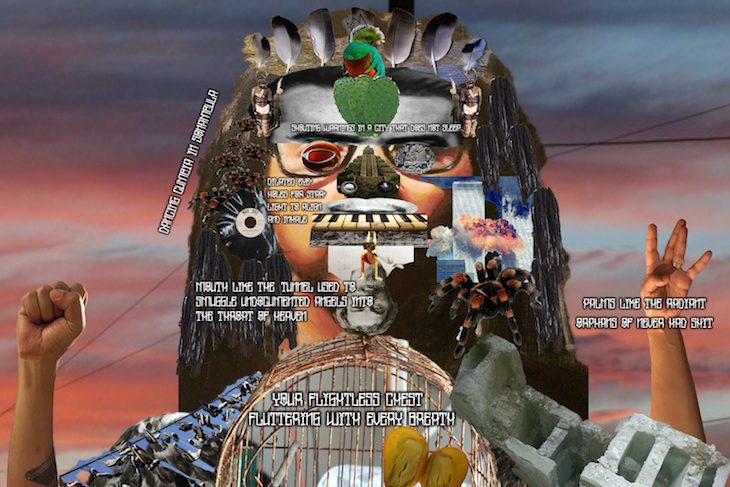 Stepping into the Alice is like unwrapping a birthday gift: The surprise is expected but nonetheless wonderful. Since 2014, the Georgetown gallery has been reaching beyond the Seattle bubble to reel in artists from all over the U.S. and connect them with writers-in-residence. In /what are we but lying single surface/, a compact but exciting group exhibition combined with a series of readings, co-curators Molly Mac and Natalie Ann Martínez ramp up the Alice’s literary links.

The connections between the works on display—paintings, videos, photos, collage and text—are unclear at first glance, as vague as the broad strokes of the exhibition statement describing “themes of identity, place, family, language, collaboration and self-making.” But a patient eye allows the show to reveal itself gradually.

There are some immediate surprises, like the “video poems” of LA-based Kenji C. Liu. He layers historic video fragments of Taiwan and U.S. bomber planes attacking Japan with his unadorned poetry to explore lineage, language and erasure. In “A son writes back,” Liu’s voice beams through headphones: “Eighteen Liu generations from the mountains of Taiwan to the malls of New Jersey. My papers state ‘medium’ complexion, the threat level to their city on a hill,”. The stanzas are a response to a qilu poem written by Liu’s ancestor 760 years ago.

Another standout is a pair of stark photos by Katherine Simóne Reynolds, a St. Louis-based photographer and performance artist, titled “You Can Find Beauty Walking Down Jefferson.” In the images, brown bricks border a scruffy white wall. The colors are reflected in the photos’ subject—a man leaning against the corner, dressed in bright white pants that contrast his elegant, slender body. In the other photo he looks straight at the viewer. I couldn’t untangle myself from his gaze.

Even more gripping are the four eyes of Phoenix-based poet and artist Rashaad Thomas’ self-portrait “Double Consciousness.” Two superimposed, blurry photos—one of the artist and one of his daughter—depict two people whose eyes, and even souls, seem to betray nothing. Writing about the photo, Thomas quotes W.E.B. Du Bois: “This peculiar sensation, this double-consciousness, this sense of always looking at one’s self through the eyes of others… One ever feels his twoness, an American, a Negro.”

The photos are arresting. Whether the subjects look straight at us or turn their heads, their stares linger. Although these works question and negotiate the concept of the gaze of a Black artist making Black portraiture, their connection with the exhibition theme becomes evident only after examining the poem and book after which the show is named, Palm Frond with Its Throat Cut.

In the intriguing poetry bundle by LA-based poet Vickie Vértiz, which was released earlier this year by the University of Arizona Press, the author writes ekphrastic poems about artworks and she stages LA as one of her main characters, an amorphous map bearing the scars of the displacement of its Latinx community.

“There is no one else but me for you,” reads the first line of Palm Frond, the words projected on the gallery wall. “The shape you’re in/What are we but lying single surface/Subatomics/Your fronds decay/Your remaining life is spiky particles/A golden rot.”

Vértiz named her poem after a 2007 sculpture by Danny Jauregui, an LA-based artist who created a series of works about the erasure of bodies, history and gay spaces due to gentrification in LA. In his sculpture “Palm Frond with Its Throat Cut,”  a parched frond rests on a red 50-inch rectangle. Its thorny leaves resemble a scorpion waiting to suck the life out of a new victim. The sculpture is not included in the exhibit and its leafy spine, arched with tension, feels notably absent here, most poignantly because gentrification and the erasure of historical neighborhoods and identity keep coming up in the other works.

In “Phantasmagoric Me,” a digital collage-cum-visual poem by Joel Salcido of Phoenix-based poetry group the Gutta’ Collective, these themes are suggested by a green street sign reading Roosevelt below large pigeon wings. The large thoroughfare of Roosevelt St. is one of Phoenix’s many markers of downtown gentrification. But Roosevelt could be any large boulevard in a formerly POC neighborhood in any American city, overtaken by colorful murals and white business owners. It could also be the “Jefferson” in the title of Reynolds’ portraits taken in St. Louis.

Through these links, /what are we but lying single surface/ unfolds as a mental map of various cities and neighborhoods, their borders always in flux under gentrification. What emerges is a not only a topography of erasure, it’s also a landscape of the demarcations between art and poetry: markers of belonging, a reclamation of the gaze, an acknowledgement of the intricacy of having multiple homelands, languages and identities. Their beauty, as seen in this exhibition, lies in their complexity.

/what are we but lying single surface/ runs at the Alice through Nov. 18. The gallery will also host readings by Kenji C. Liu and Vickie Vértiz on Nov. 11 and Joel Salcido and Rashaad Thomas of the Gutta Collective on Nov. 18.