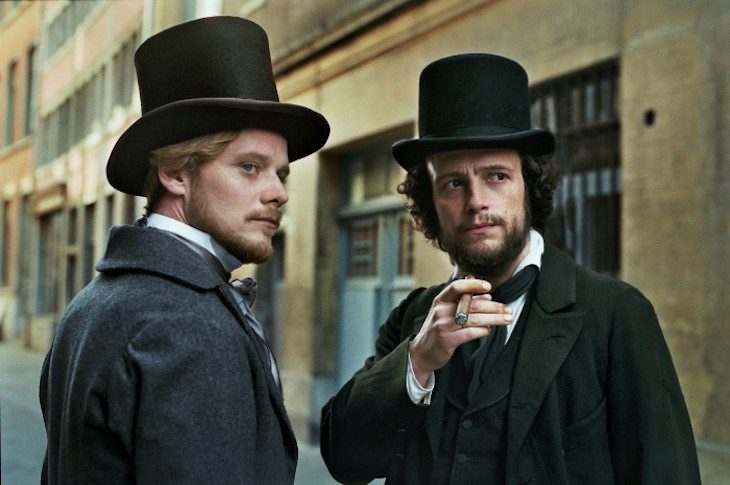 The great directorial masterstroke of Raoul’s Peck’s new film The Young Karl Marx was making his actors learn each of the languages spoken in the social tapestry of 19th-century European radical politics. By resisting the bland trans-Atlantic British accent that often mars historical dramas set in Europe, Peck prevents us from glossing over the ethnic and national differences of the embattled world he portrayed. In so doing, he has created a wonderful, if unwitting, commentary on contemporary leftist politics. Because while so-called “Bernie Bros,” self-styled “dirtbag socialists,” and non-intersectional Marxists go on erasing the importance of identity in anti-capitalist politics, Pecks how the particularities of race and gender implicate Marxist politics at their very source—in the life of Karl Marx (1818-1883) himself.

Available now on iTunes after a brief theatrical run, The Young Karl Marx picks up with its subject in his mid-20s, on the run from police persecution in the colonial backwater of Prussia. What follows is a border-crossing saga of socialist organizing and speech giving, showing how the bearded prophet of communism failed to support his family while decrying the ills of capitalism. The film’s plotlines relay the broke Marx’s audacious marriage to aristocrat Jenny von Westphalen, his budding bromance with cotton magnate Friedrich Engels and his petty crusades as a leftist in-fighter. With so much going on, The Young Karl Marx may have worked as a Netflix series spanning several seasons and dozens of episodes. The silent specters haunting this densely packed drama are the intersecting forces of class, caste, and gender, with Marx’s problematic life choices saying as much about capitalism as the words he wrote to denounce it.

“The first premise of all history is the existence of living human individuals,” wrote Marx in his 1845 treatise The German Ideology. “The production of ideas and consciousness is interwoven with the material activity of men.” Indeed, The Young Karl Marx shows how the philosophy of communism—adapted globally by billions of people in the century following Marx’s death—was rooted in a set of racialized geographic rivalries in Europe.

Absent from the quest for colonial spoils until the conquest of Tanzania in 1880, and largely ignored by intellectuals in more advanced industrial nations, 19th-century German philosophers like Herder and Hegel took refuge in elaborate theories that represented society from a distance, as a set of abstractions and tedious propositions. This philosophical lineage produced the term zeitgeist, a vague descriptor still used by armchair social theorists to describe ideas that float mysteriously in the air. As evidenced by the writings Critique of Hegel’s Philosophy of Right and On The Jewish Question, Marx’s main preoccupation in the years covered in The Young Karl Marx was linking Germany’s straggling economic state with the confused metaphysics of its most famous philosophers. As such, the identity politics of Marx’s milieu were a key signpost in his arrival at socialism.

“There is nothing I can do in Germany,” Marx wrote to his editor about the country of his birth in 1843. “One debases oneself here.” Indeed, Marx and Engels understood their great contribution to philosophy to be their expansion of it to include thinkers from countries that had advanced beyond German’s primitive agricultural status quo. “Your critique of religion and idealism will leave a mark,” Engels admonishes Marx shortly after the latter was expelled from Germany for seditious activity in The Young Karl Marx. “But what your writing lacks is the work of the English economists.” Henceforth, the writings of Marx and Engels combined an alchemy of English economics, French political history and German philosophy to produce the pan-continental theory of society called communism.

Much of young Marx’s literary and theoretical expansiveness was grounded in embarrassment about his origins. His identity as the son of a converted Jew was a constant source of anxiety, particularly in his twenties as his inassimilable Jewish surname was a strike against Marx in worldly metropolises like Brussels and Paris. The Young Karl Marx touches on Marx’s self-hatred in a scene where an anti-Semitic remark from a slimy English businessman momentarily humbles the normally mouthy Marx.

But if national and ethnic disprivilege informed Marx’s public life, gender privilege defined him privately. Like most men in their twenties before and since, Marx in the 1840s had no problem passing off his problems onto the women in his life. The Young Karl Marx shows him skipping out on collecting milk money to drink and smoke with Engels, happy to offshore the duties of childrearing to his dutiful wife Jenny. The film depicts Karl and Jenny’s marriage in the 1840s as a difficult yet faithful one, but contains no allusions to an earlier indiscretion in which Marx openly courted another woman in front of Jenny.

Then, of course, there was that one time Karl impregnated the family maid in 1851. Marx made Engels take the blame for the bastard son, initiating a decades-long cover-up that ironically overlapped with the years Engels spent writing The Origin of the Family, Private Property, and the State (1888), a book still cited by Marxist-feminist scholars. Marx and Engels’ misdeed eludes the timeframe of The Young Karl Marx, but the memory of it sabotages the film’s attempt to present the coupledom of Karl and Jenny as a cute romantic comedy.

For those seeking to understand the reemergence of Marxist thought as a force in American politics, recalling these episodes from the life of the young Karl Marx is not an academic exercise. They speak to the ways that the country’s emerging left is understood and misunderstood, as a movement that centers redistributive justice philosophically, but one that also has work to do in terms of centering those whom capitalism has historically disadvantaged the most: minorities and womxn.

In the 2016 election cycle, supporters of democratic socialist candidate Bernie Sanders were frequently maligned and stereotyped as gender-oppressive, colorblind white males. This stereotype of the “Bernie Bro”—kept relevant by self-proclaimed “dirtbag leftists” who flaunt political correctness with the same veracity as Trump’s “deplorables”—is actually erasure: As he recounts in his 2017 book Our Revolution, Sanders carried strong majorities among Millennial people of color in the 2016 primaries, and remains at least as popular nationally as African American Democratic Party insiders like Cory Booker and Kamala Harris.

Nonetheless, the plank of the stereotypically white socialist is lodged in the public imaginary about the left, aided and abetted by actual white socialists who see concerns about intersectionality and anti-racism as the unwanted liberal pollutants of a pure Marxist focus on “the working class”—a working class that is browner, queerer and more feminine than ever.

Ultimately, how one feels about the question of identity politics in Marx’s life and work hinges on how one feels about the question of “social reproduction”—a concept advanced by Marx himself in Chapter 23 (“Simple Reproduction”) of his 1867 magnum opus Capital. As Marx wrote, “capitalist production is a continuous connected process, a process of reproduction, that produces not only commodities and surplus-value, but also reproduces the capitalist relation.” Human relationships under capitalism legitimate and reproduce capitalism, meaning that every social interaction—friendship, dating, marriage, even interactions between fellow socialists—is potentially a “workplace” divided between elites and serfs, capital and labor. Watch a wife make her mansplaining husband feel smarter and more interesting than he really is, or a person of color stomach their revulsion to casual racism to placate whites on whom they depend for access to resources, and you’ll have an idea of how capitalism socially reproduces its hierarchies.

On the one hand, this lens is not what is commonly thought of as “orthodox” Marxism. One cannot unionize women in relationships who contribute a disproportionate share of emotional labor any more than one can reliably organize people of color strictly on the basis of their shared antipathy to white people who say and do dumb things. However, one can organize these groups to strike, support candidates or protest once they join official unions or workers associations. The wave of teacher strikes in the last month indicate the lasting potency of Marx’s vision. The Young Karl Marx ends with the authorship of The Communist Manifesto of 1848, a massively influential pamphlet that ended with the ringing phrase “workers of the world unite, you have nothing to lose but your chains!”

But as important as it is to elevate the pitfalls of the laborer in the established workplace, it is critical that the invisible labor contributed by capitalism’s most disadvantaged are not erased. Marx’s brilliant 1844 essay about the illusion of “free time” under capitalism notwithstanding, many Marxists suffer from a lack of imagination, focusing only on the exploitation that takes place during the workday while not realizing that capitalism itself does not punch a clock.

Far from diluting concerns about “the working class,” the concept of social reproduction should make us hyperaware of the way work is unevenly distributed and uncompensated in all social relations. This ought to raise the bar for what it means to be on the broadly-defined Left, by asking adherents to take an anti-capitalist awareness with them to work, and also to after-work beers with friends, to dinner party conversation, to dates and to the bedroom. We can strive to create a world where Karl Marx does not have to make himself appear “less Jewish” to the capitalist Anglophone world, but also one where he does not unfairly make Jenny Marx responsible for managing the emotional fallout from his absentee fatherhood and affairs.

The Young Karl Marx gives flesh and bone to an often-disembodied intellectual tradition. It puts us in the social world that created socialism, showing that the problems of identity and anti-capitalism are as inextricably linked, as one scene puts it, as “a hand in a glove.” Tempted as we might be to get lost in the historical drama of the film, there’s more than one script for fighting injustice. Representations of the Marxist tradition have only interpreted it in various ways—the point, however, is to change it to suit our own times.