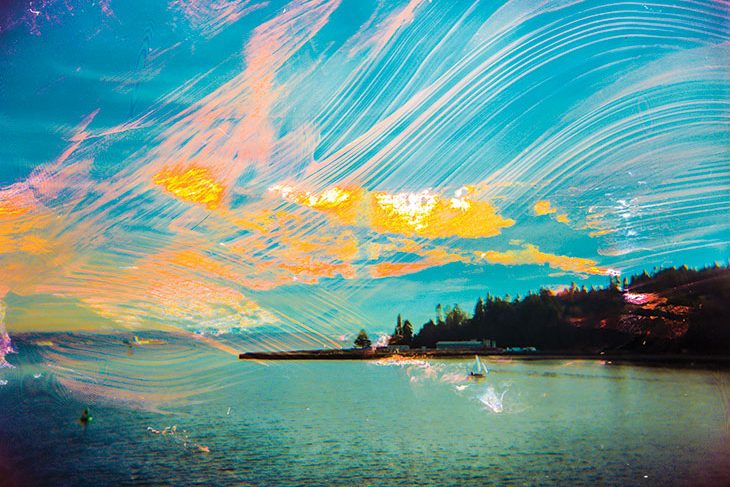 Iain Mangum relishes in the tension between pristine images and the obstructions he superimposes on them. His large-scale prints are made through a process that subverts the typical photographic processes by taking 120 format color negatives shot with a Holga and scanning them with an improperly calibrated scanner. He then prints them onto acetate, which is transferred again as a print onto a new negative. Streaks and smears result from the handling and multiple transfers—and are left as part of the final print, mounted on dibond, an aluminum composite material.

“The process is, in essence, a dialogue about loss,” says Mangum. “Many of the snapshots feature images of local waterfronts or photos taken from the ferry. This piece is made from two separate photos taken on Puget Sound. The name is inspired by Death Cab for Cutie’s song “Gold Rush,” about the rapid gentrification that’s taken place in Capitol Hill. While the photograph doesn’t directly relate to urban gentrification, the sentiment of grief and loss that stems from being unable to prevent change is nearly identical.”

On view as part of You Can’t Take Everything With You at Linda Hodges Gallery through Oct. 27.