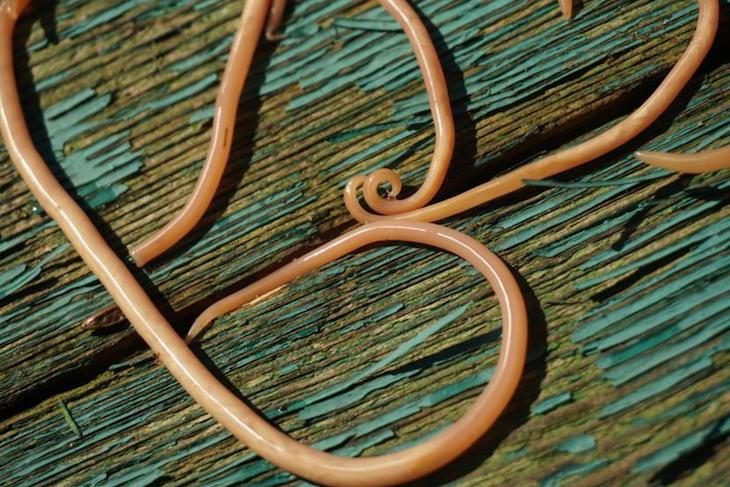 You might’ve heard that a group of Russian scientists recently revived a pair of worms that had been frozen in Siberian permafrost for 42,000 years. My name is Mudka and I am one of those worms. We’re actually called roundworms—nematodes if you’re nasty. I’d like to share my story with you.

Before the freeze I lived deep in a squirrel burrow working a really rich patch of bacteria with my comrades.

Those were heady days, when there was a strong sense of shared purpose. We felt like we had a shot at carving out a tiny little corner of the big cruel world where we could finally all thrive. Seems so naïve now.

It’s all been a blur since Clayleem and I were reanimated. She’s the other nematode, also female. She’s younger than me by about 10,000 years—she’d just moved out of her parent’s host carcass right before the big freeze, so she’s annoyingly chipper and enthusiastic. She’s always having these obvious “insights” that she thinks are super deep. Deca-millenials, am I right?

Nevertheless, we’ve come to depend on one another through this whole ordeal, and I consider Clayleem my sister.

It’s nice to be pampered here in the lab, but where were all these doctoral students back in the Pleistocene when I was slogging my way through a dead locust thorax for weeks on end? They give us all the bacteria we can eat, but it’s pretty bland. I guess it’s true what they say: White people don’t know how to use spices.

The most common reaction to our new life is, “Uh-oh, this can’t be good.” They’re referring to the scenario portrayed in Jurassic Park in which a bunch of lab-grown dinosaurs run amok. I’m here to assure the people of Earth that you have nothing to fear from us. What are we gonna do, release slightly more nitrogen into your soil? This knee-jerk alarmism is par for the course among humans, who are, after all, the ones who woke us up in the first place.

I’m enjoying my moment in the spotlight, even though the lab used a very unflattering photo for the press release. Sometimes I wish I were back out there in the loamy Siberian soil stuffing my stoma with root rot, but ultimately I’m glad I ended up here. I really think I can make a difference this time around, you know?