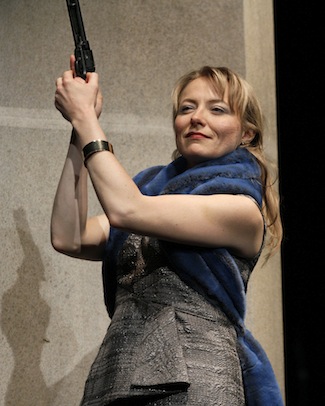 Goddamn the idle rich for their moralistic handwringing, their self-absorbed bloviating, their desperate chokehold on the status quo. Goddamn them simply for their idleness and their richness. And god bless ’em for providing a gruesome, lavish pageant in Henrik Ibsen’s Hedda Gabler, a 120-year-old Norwegian drama that opened last night, hot and caustic and distressing, at Intiman Theatre.

At the center of the story is Hedda Gabler (Marya Sea Kaminski), a confoundingly, magnetically complex young lady of aristocratic descent. Hedda and her new husband, an ineffectual academic named Jorgen Tesman (Ryan Fields), have returned to their hometown after a six-month honeymoon-slash-busman’s holiday, during which Jorgen couldn’t resist conducting research in his esoteric area of study. Their imperfect pairing is immediately evident: Jorgen fails at pleasing the unpleasable Hedda, who, in her ennui, takes pleasure in emotional manipulation and fits of compulsion.

One such fit, we learn, led Jorgen to borrow money from imperious local patrician Judge Brack (a swaggering Timothy McCuen Piggee) to buy Hedda the mansion where the couple settles after their honeymoon. All of the play’s action takes place in and around the Tesman house, its fainting-couched salon center stage, various rooms partitioned by gauzy silk curtains slung across the stage, a staircase leading to floors above. It’s a minimalist, almost ghostly set that implies the immovable permanence that binds the characters. The costumes, too, are modern and sleek, a fashionable but uptight uniform for the narcissistic bourgeoisies, and the unnerving, ambient score rises only to the level of barely-there.

Kaminski breathes danger and vulnerability into the part, her Hedda descending from bemused detachment to ominous instability. The rest of the cast also give powerful performances that savor Ibsen’s declarative dialog, rife with subtext and innuendo, contributing an almost palpable meta-reality to the hyper-stylized narrative.

In Act I, Hedda calls the mansion “a consequence of my whimsicality.” That phrase is applicable to every subsequent convolution, small and large, that she orchestrates. Jorgen’s meddling, haughty aunt, Miss Tesman (Shellie Shulkin), barges into an early scene, as does Thea Elvsted (played with quivering frailty by Fawn Ledesma), a bimbo who recently abandoned her aged husband in order to play muse to Ejlert Lovborg (Michael Place), a brilliant former wastrel redeemed after publishing a well-received book. Hedda manipulates each of them in turn, intent on maintaining her tenuous control over them. She also keeps a pair of loaded pistols in a case on a sideboard in the house. For fun.

In Act II, the tightly wound setup of Act I unravels with jarring speed. Further entanglements, rivalries and broken relationships are revealed, brought to a head at an offstage party, a men’s-only debauch with Lovborg, Jorgen and Judge Brack. Hedda and Thea are left alone in the mansion to wait as Hedda’s schemes of post-romantic payback play out: She is stripped of her delusions and becomes victim of her own machinations. Jealousy, revenge and power ebb and flow. Lives are destroyed. Things end badly.

Director Andrew Russell’s production distills Hedda’s malevolence into some sort of chemical imbalance; she is, apparently, insane, as suggested by Kaminski’s occasional scene-freezing yawns, contortions and conniptions, choreographed with compelling, Butoh-esque grotesqueness by Olivier Wevers. Behind the bat-shit crazy, we’re left to wonder about the sociological or cultural causes of Hedda’s impotence and rage. In this production, her descent into madness feels like a horror movie trope—shocking and vivid but ultimately perplexing.

Hedda Gabler raises issues of class, power and violence, but its titular character breaks under mental illness, not social pressure. Hedda is ultimately crushed by an unseemly world of unreasonable morals populated by reasonable, amoral people.