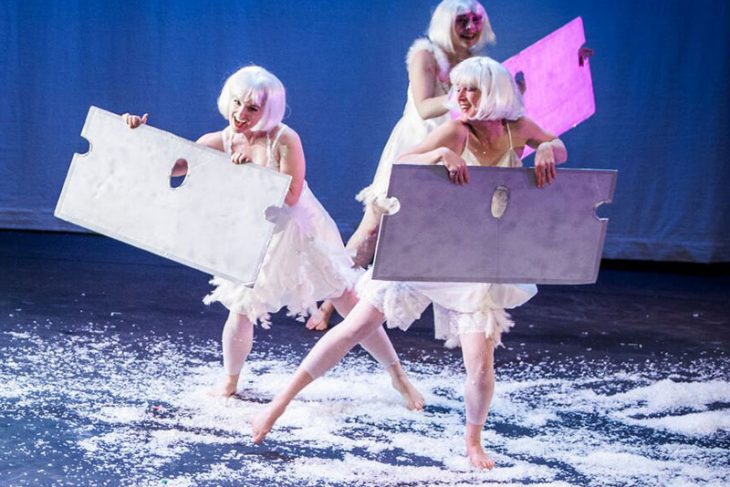 I’m never one to turn down a mindfuck horror movie, and this effort from writer/director Akiz about a woman dealing with her metaphoric and literal demons reputedly fills the bill and then some. —Tony Kay
Grand Illusion Cinema

Lucas Hnath is a monumentally talented playwright whose play The Christians boils down to the question: What happens when the leader of a megachurch decides he no longer believes in Hell? Play readings are a great way to savor the words of a script, sans production value—theatre company Thalia’s Umbrella hosts this casual event, and it’s free! —Gemma Wilson
Solo Bar

My excitement for this new musical was stoked by my recent rehearsal room visit with the cast and creative team of Howl’s Moving Castle. Sara Porkalob stars in the Book-It adaptation of Diana Wynne Jones’ magical book, with a script by Myra Platt and score by Justin Huertas. It  looks to be clever, silly and sweet, and it runs through Dec. 30. —Gemma Wilson
Center Theatre at the Armory

It’s a holiday book sale, reading and meet-and-greet with writers and publishers from beloved local poetry press Copper Canyon! Traci Brimhall reads from her new poetry collection, Saudade, and staff will be there to help you shop. —Sarah Galvin
Hugo House

Welcome to Night Vale is a podcast in the guise of a community radio show dedicated to narrating the events of a fictional Southwestern town in an unnervingly measured tone. It’s equally surreal, nightmarish and funny, an impeccably literary oddity in the podcast realm. This live show features musical guest Mal Blum. —Brett Hamil
Neptune Theatre

One of the two sources of the glorious alien trill emanating from the B-52s’ immortal “Rock Lobster” sings and plays her heart out in a small club. It really is Christmas time. —Tony Kay
Chop Suey

History podcaster Mike Duncan reads from his new book The Storm Before the Storm: The Beginning of the End of the Roman Republic about the (alarmingly familiar) conditions that led to the fall of the Roman Republic: the exploitation of social inequality by those in power, the failure of systems of governance to adapt to change and a host of other problems you’ll find disturbingly relevant. —Sarah Galvin
Elliott Bay Book Company

Just when you thought you’ve seen every possible tired iteration of a Christmas show, the naughty elves behind Buttcracker shake up the snowglobe and turn it on its head with modern dance set to buttrock anthems and glazed in holiday cheer and shmaltz. I’m dreaming of a Whitesnake Christmas… Also runs Dec. 15–17. —Dan Paulus
Erickson Theatre off Broadway

This pair of energetic indie-rock bands share members, tour together and generally approach music with the same attention to songcraft and wry-but-eager earnestness. But until tonight, they’ve never played together on the same stage at the same time. Word is they’re bringing a horn section to help lubricate the overlap. I’m psyched to see what’ll unfold. —Jonathan Zwickel
Piranha Shop

Looking for more holiday shows? Check out this roundup of our favorites.