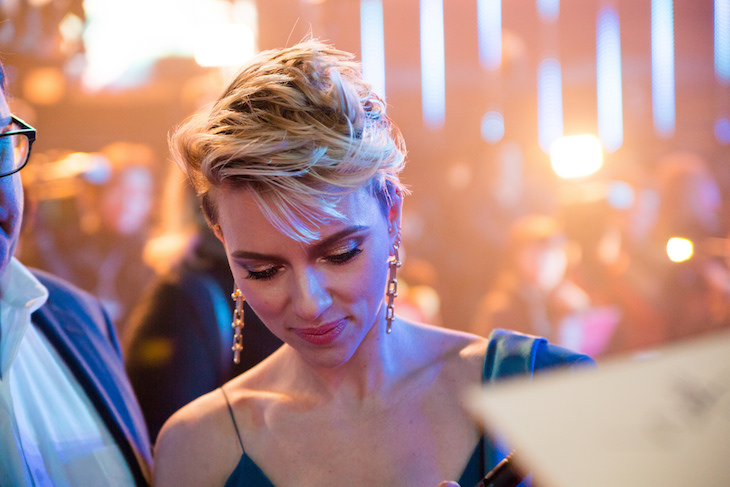 On July 3 I went to a friend’s annual Independence Day viewing party, a laid-back pre-funk to a day I feel conflicted celebrating in the age of Trump. But I couldn’t focus on the movie. During one of the various intermissions and pee-breaks, I asked my friends, a group of LGBTQ folks and allies, “Can you name one transmasculine actor in Hollywood?”

And not one person could.

I can. I can also name more than a dozen trans men or transmasculine nonbinary actors in Seattle. Despite constantly hearing from casting directors, producers and theater companies how impossible it is to find trans talent, I can also name trans actors in pretty much any major city in the United States. And we’ve all had it with our existences being denied.

What distracted me during Independence Day was the earlier announcement that Scarlett Johansson was cast as Dante “Tex” Gill, a transgender man, in the upcoming mob movie-cum-biopic Rub & Tug. The backlash from the trans community was immediate—and the backlash to the backlash was just as predictable. “It’s just acting!” is the most common rebuttal when trans artists protest appropriative casting. “People should be able to play whatever they want!”

I’ve known I wasn’t a woman since the age of 10, but it took decades for the people in my life to acknowledge me as nonbinary. Some still don’t. Why? Because there’s a perception that I’m pretending.

Casting a cisgender person (a person who identifies as the gender they were assigned at birth) as a transgender person reinforces the pervasive and toxic notion that trans people are faking it. Trans people face this dilemma every day. Our existence is perceived as a charade, an act, a fraud. I’ve been told that transgender people can simply “opt out” if they want to.

We can’t. Lord knows I’ve tried—most recently when I moved to Seattle in 2013. No one here knew me or that I was nonbinary. In the past, my acting opportunities had been limited by my masculine appearance, so when I got here I grew out my hair, wore dresses and makeup, and passed as a woman. I got cast almost incessantly for two years. Which was great, until I had a nervous breakdown from having to constantly lie. I came out—again—and the roles dried up—again. No matter how a trans person chooses to live, there’s almost always a cost.

Johansson’s problematic casting isn’t just denying a role to a transmasculine actor (of which we can name zero, remember), it’s also a choice by the studio to deny that the historical figure is transgender. They’ve stripped Mr. Gill of his gender identity and instead refer to him as a woman who crossdressed and was “sexually ambivalent.” They are literally erasing a transgender person’s existence.

Johansson knows better. She’s a lifelong Democrat. She was a keynote speaker at the 2018 Women’s March. She claims to be an LGBTQ ally. But when pressed for comment, she said, “Tell them that they can be directed to Jeffrey Tambor, Jared Leto and Felicity Huffman’s reps for comment.”

Essentially: “I know I’m doing something awful, but other people have done it and gotten away with it.”

Also, remember that Jeffrey Tambor was fired from Transparent for sexually harassing trans women, and that the show’s creator Jill Soloway has since publicly stated that casting cisgender people in trans roles creates abusive power dynamics.

You’d think Johansson would’ve learned from the blowback over her casting as a Japanese woman in Ghost In the Shell. That she didn’t suggests she’s looking to exploit the story of a trans person for her own gain, while actual trans people can’t even get into the casting room. She gets to boost her resume and potentially win an Oscar, while trans people, especially trans people of color, are abused, murdered and legislated against around the country and the world.

Another more dangerous argument that marginalizes trans people is one I’ve heard from otherwise liberal people: Yes, Scarlett Johansson is in the wrong and we should definitely only cast trans people as trans people. But trans people shouldn’t be allowed to play real men and women.

This dehumanizing argument, that trans people aren’t “real” men or women, is a transphobic perspective that results in trans people, once they are outed, almost never being cast as their gender, even when they fully pass as cisnormative. It’s wrong for a cisgender woman to play a trans man, especially when a trans man isn’t allowed to play his real gender: a man.

As black trans artist Lady Dane Figueroa Edidi puts it, “The feeling that there are no skilled, nuanced and brilliant trans actors is transphobic. Beautiful brilliant dynamic emotive trans actors exist. We are often discounted before we come into the room—if we are even allowed in the room. Oppression is a web, not a monolith.”

Untangling the web will take a lot of time, work and listening. And I for one am tired of shouting at closed doors.